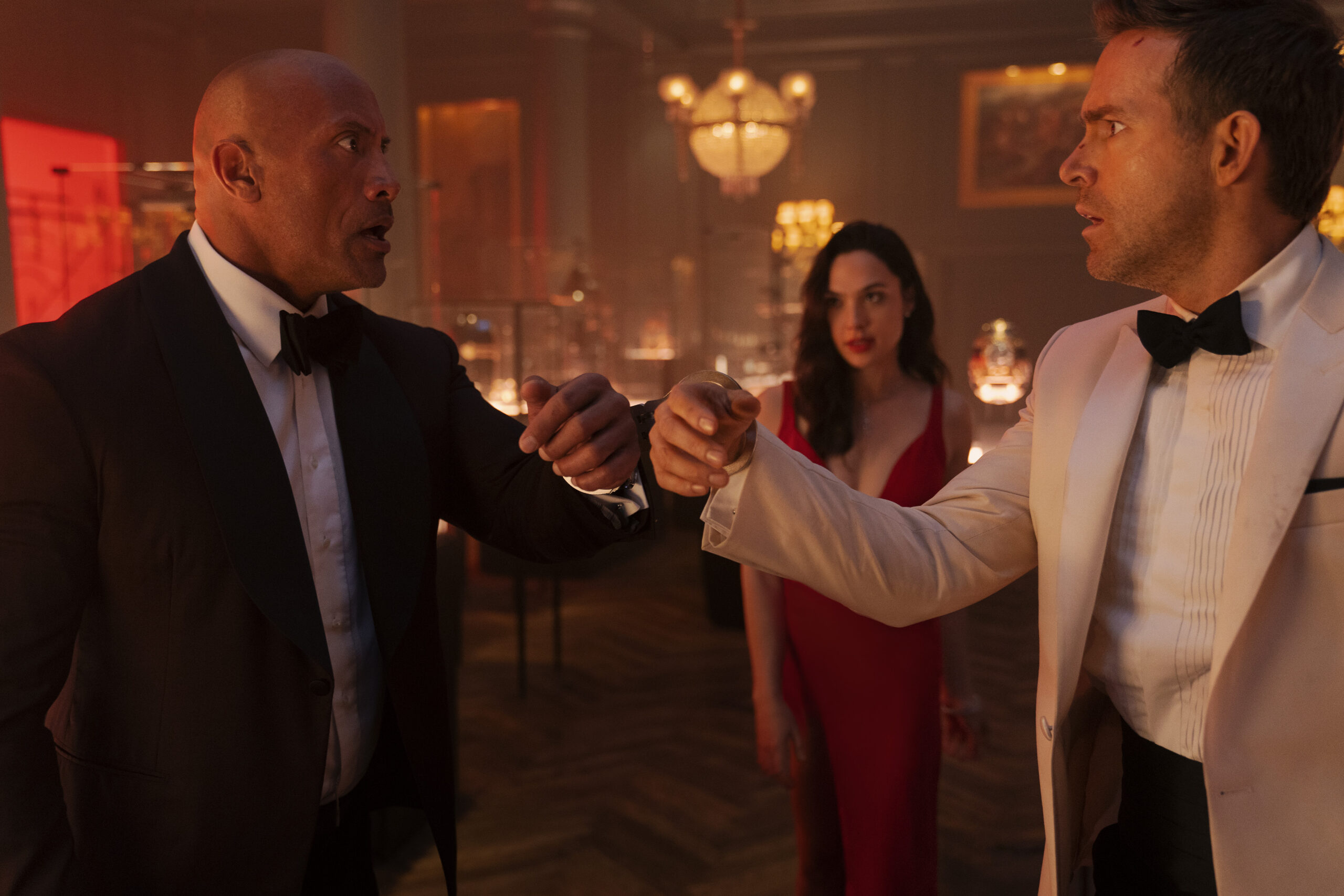 Red Notice is an action heist film starring three A-list movie stars, Dwayne “The Rock” Johnson, Ryan Reynolds, and Gal Gadot. The film isn’t some low-budget lark starring big names- in fact, it’s purportedly the most expensive film in Netflix history. It’s the type of movie that, not too long ago, might have anchored an entire month of the summer movie calendar.

Yet Red Notice, which is landing in theaters this week and on Netflix a week after that, is arriving with next to no hype or fanfare. Not that it deserves it, as it’s utterly forgettable in just about every way.

This is a film which, aside from the charisma of the three stars, has just about nothing to recommend about it whatsoever. It’s almost to the point where it almost doesn’t feel like a real movie.

Red Notice is a globe-trotting action movie that borrows various aspects from the Bond, Bourne, Indiana Jones, and Mission: Impossible traditions while incorporating a cat-and-mouse element as well.

The director and writer is Rawson Marshall Thurber, best known for the hit comedy DodgeBall: A True Underdog Story, and later, much worse movies like We’re the Millers and Central Intelligence. His last film before this one was Skyscraper — also known as Die Hard in a Building — also with Johnson, which was better than its tired premise indicated.

In Red Notice, Johnson plays an FBI profiler, reprising his Fast and Furious position as a government agent interacting with the outlaws in the rest of the cast. And much like in the Fast franchise, he’s certain to end up aligned with his nominal rivals before long.

The FBI profiler profession has gotten a lot of pop culture portrayal over the years on shows like Criminal Minds and Mindhunter, as well as that great scene on Season 5 of The Wire in which McNulty meets the vaunted profiler how was credited with catching the Unabomber (“Didn’t his brother turn him in?”) But the movie never does anything especially interesting with Johnson as a profiler.

Johnson’s agent is up against a pair of rival thieves, played by Reynolds and Gadot. Complex plot machinations are enough to put the characters in the same room at the same time for long stretches.

The plot is some nonsense involving a bunch of ancient eggs, which the characters are all chasing, while daddy issues raise their ugly head, as do Nazis.

It’s also one like one of those 1990s thrillers where there’s a massive, resetting plot twist roughly every 15 minutes.

These are all true, upper-echelon movie stars, and Gadot, in particular, has always been especially interesting as an actress when she’s not within the confines of playing Wonder Woman. She has some moments here, but while Johnson and Reynolds often have crackling chemistry with co-stars, the two men don’t gel together for whatever reason. Even Reynolds’ Hitman’s Bodyguard franchise, which is nobody’s favorite, has this beat by a lot.

Especially terrible here is the film’s attempts at action. The action scenes are all shaky-cam, quick-cutting, and all of the other worst trends in action-adventure filmmaking in the last 15 years. These scenes offer a level of cutting that recalls that viral video from one of the Taken sequels in which six seconds of Liam Neeson jumping over a fence requires 15 cuts.

The attempts at comedy are especially weak. When there’s a sight gag, at the 40-minute mark, of a Russian soldier liking Instagram pictures of Vladimir Putin, it was the first time in the movie I chuckled.

Red Notice is a rare high-budget blockbuster with movie stars that’s a completely original story, not a sequel or remake or adaptation. Instead, it’s just about nothing at all. After watching this movie, I don’t expect to think about it ever again, starting an hour or two from now.

The Many Saints of Newark: An Origin Story That Enriches The Epic Saga of The Sopranos