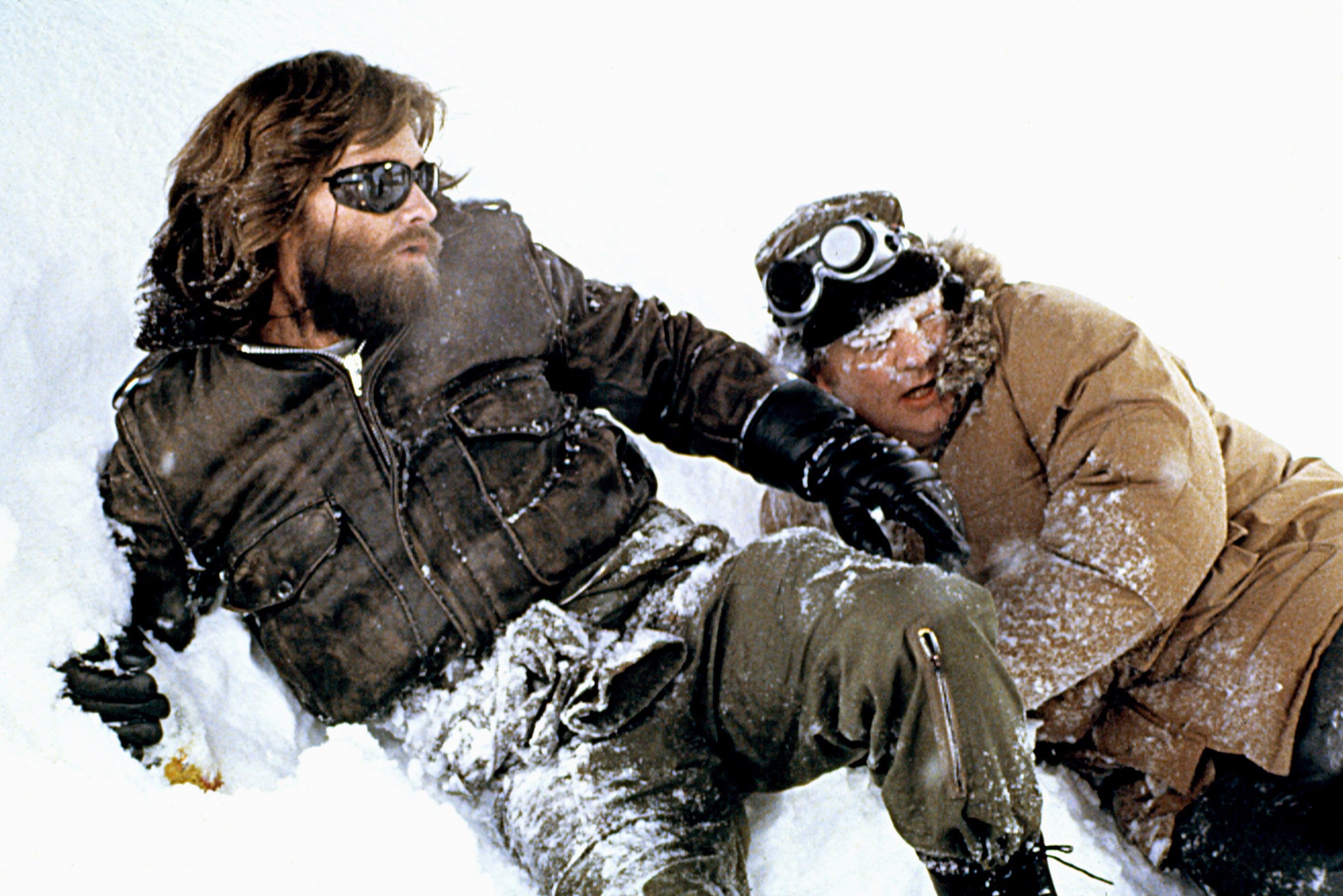 Despite being a strong contender for the title of John Carpenter’s greatest film, his 1982 science fiction­–horror film The Thing didn’t originate with him. The project was first proposed in the mid-1970s with producers at Universal Pictures, and though Carpenter was one of the names in consideration to direct it, Tobe Hooper was originally chosen based on the strength of 1974’s The Texas Chain Saw Massacre (though it didn’t hurt that he was under contract to the studio). Carpenter would only officially become involved years later after multiple other directors had been continued. The Thing would be the first film Carpenter had made that wasn’t based on an original concept, yet his ability to imbue the material with his style, plus a crackerjack cast and its chilling monster make it the best of his already impressive oeuvre.

The Thing opens with an absurd, almost comical scene of two members of a Norwegian research community chasing an Alaskan Malamute through the barren tundra of Antarctica while trying to shoot in from their helicopter. The would-be hunters are dispatched, both by commander Garry of a US research station they stumble across, as well as their ineptitude. What initially seems like an extreme case of cabin fever becomes something much darker when the helicopter pilot MacReady (Kurt Russell) visits the abandoned Norwegian station with the research expedition’s commander Garry (Donald Moffat) and Dr. Copper (Richard Dysart). The burned-out station holds a thawed-out space in a block of ice that once encased an extraterrestrial creature that crash-landed in the ice millions of years earlier. The malamute that wonders through their research station is this alien creature in disguise, and it begins to consume and mimic the station members one by one.

The Thing was a choice project for Carpenter, who was an avowed fan of The Thing from Another World (1951). That earlier film was produced by Carpenter’s idol, Howard Hawks, and helmed by Hawks’ longtime editor Christian Nyby, making his directorial debut. For decades, cast members disagreed over who directed the film, whether it was Nyby in constant consultation with Hawks, or if the veteran filmmaker was mostly running the show. The likeliest answer is that Nyby, Hawks’ closest collaborator at the time, had so thoroughly absorbed his style by helping to actualize it in the editing room that he was able to create a good enough simulacrum of it with his film.

Carpenter has been vocal about his love of Hawks’ films (which he expands on in his commentary for Rio Bravo), and the influence is immediately obvious in The Thing. Rio Bravo might be the ultimate Dudes Rock! film but Carpenter gives it a run for its money with his portrait of a group of Americans doing their best not to go insane while working in the solitude of an Antarctic research station. Regardless of what genre he was working in, Hawks was a master of dialogue who vacillated between the mellifluous rhythms of screwball comedy and the more naturalistic cacophony of overlapping speech. The Thing’s screenplay, written by Bill Lancaster and later rewritten in collaboration with Carpenter, has plenty of snappy lines that would have fit perfectly in a Hawks movie, and as the characters’ positions become more precarious, the dialogue begins to overlap and jumble to mark their increasing desperation — leave it to a bunch of dudes to talk over each other.

We know Kurt Russell is the star of The Thing because he’s the highest-profile actor in the ensemble, but the film doesn’t go out of its way to make that obvious, and other actors, especially Keith David as Childs and Richard Masur as the animal-loving Clark, have their time to shine. Even if he’s the hero who rises to the occasion, MacReady is also a villain of sorts. It’s the late, great Wilford Brimley as Blair who first realizes the devastation the Thing could unleash on the world if it got out of Antarctica. He takes extreme measures and destroys their vehicles and radio equipment to prevent them from escaping, but someone would likely check in on the research crew after enough time without contact had passed. But in response, MacReady locks Blair in a cabin away from the station, making him a prime target for the Thing. MacReady even finds Blair’s incisive notes, in which he speculates that the creature tries to find people alone to consume and mimic them, as its weakest when transforming, yet he leaves Blair unguarded and is quick to send others off on solo errands that rarely turn out well. It’s because of MacReady that Blair is turned, and others’ deaths lie at his feet.

As nuanced and intriguing as the complicated interplay between Russell and the other actors is, the real attraction of The Thing is, well, the Thing. Rob Bottin, who’d collaborated on the creature effects in The Fog (1980), returned to design the shapeshifting monster, and his creation would become the most effective movie monster in history, tied only with the xenomorph in Alien (1979). Lancaster and Carpenter envisioned a version of The Thing that was more faithful to John W. Campbell’s original novella Who Goes There?, which featured a shape-shifting alien, rather than the creature in Nyby/Hawks’ film, which looked like a bald Frankenstein’s monster and was described as being like a humanoid plant, or a “super carrot,” as the reporter looking for a scoop calls it. Bottin’s conception used foam and latex and air bladders, plus copious amounts of K-Y Jelly, to create a monster that could change shape and reveal surprise appendages. Gross-out gore-meisters would be inspired by the baroque elegance of the creature effects to create their own stomach-churning visions of cosmic horrors. After the initial shock of seeing the dripping, seething monster, it becomes almost pleasurable to marvel over how the effects were created. In contrast, the execrable 2011 prequel used digital effects to create the creature, but when you can create almost anything with a computer it ceases to be of interest.

The Thing was famously derided by critics when it was released in 1982, and subsequent commercial failure was blamed on opening just two weeks after Steven Spielberg’s E.T. had conquered hearts with its adorable raisin of an alien. (This was back when films had considerably longer releases and a film’s success wasn’t determined solely on its opening weekend grosses.) With limited options, it’s logical that plenty of families and even adults would rather see the legitimately delightful E.T. than the gross and depressing Thing. But that doesn’t explain the hyperbolic pans many critics gave the film. It was more of a mainstream position then than it is now to write off horror films, as some reviews from the time seem to do. Some critics may have seen E.T. as another step toward legitimizing science fiction, while The Thing once again tainted the genre by pairing it with horror. Looking back from 2020, E.T. seems like a poor encapsulation of the Reaganite 1980s. The Thing, with its fear of the other, its apocalyptic visions, and its every-man-for-himself attitude, now seems like the more accurate portrait of the era.

Toward the start of the coronavirus pandemic, some rushed to determine the works of art that best summed up the era, whether they were brand-new or sturdy classics. Some of the picks were embarrassing, but The Thing seems like one of the more apt choices. The stranded research team is cut-off from the world, partly by choice and partly by necessity, as they battle an unknowable force, as many of us are trying to quarantine to slow the spread of a virus we only partially understand. But the men of The Thing constantly make the wrong decisions and allow others (and sometimes themselves) to be sacrificed because of their disagreements and petty grievances. Perhaps we’ll all band together and join forces to combat this current threat, but with each new day, The Thing seems like a more accurate blueprint for what our future holds.

Editor’s Note: This article was originally published on August 17, 2020.