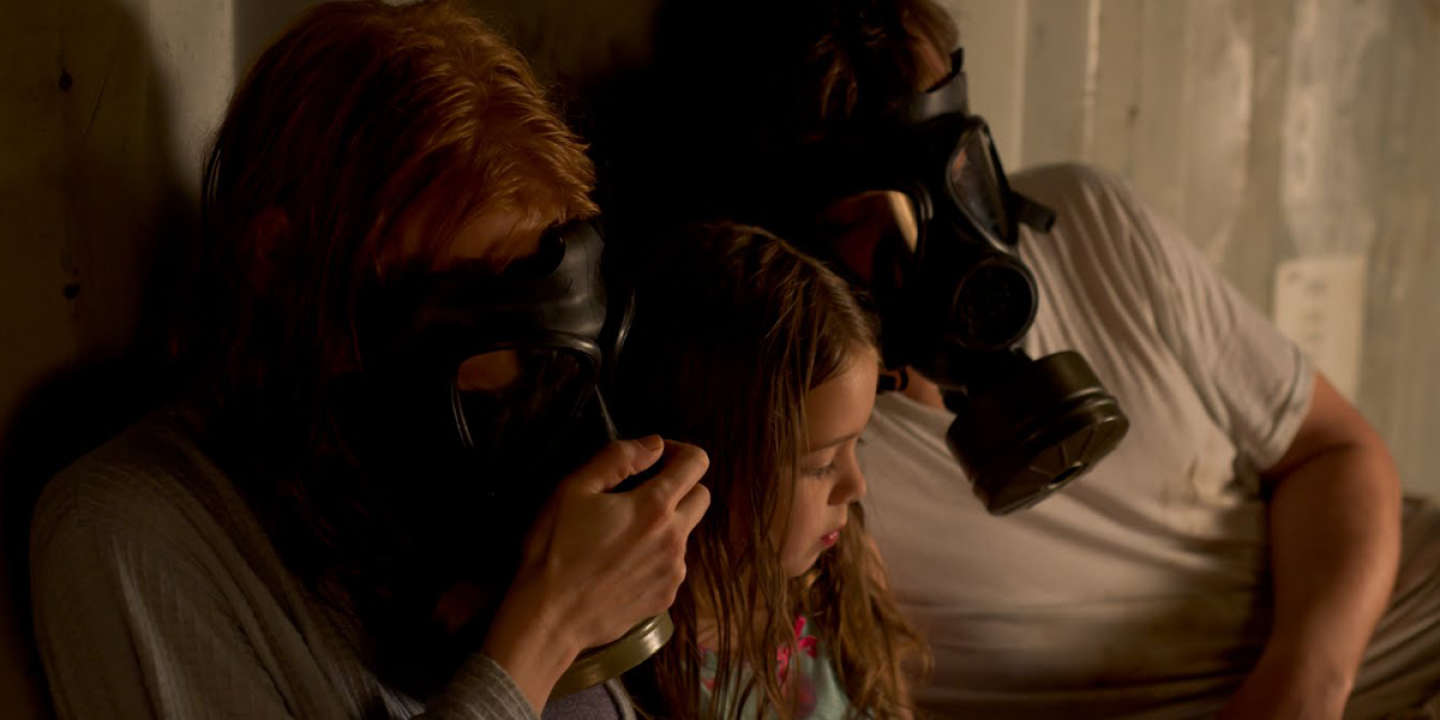 This is the story of an everyman, Curtis LaForche, who lives in a small Ohio town with his wife Samantha and six-year-old daughter Hannah, who happens to be deaf. Curtis is haunted by visions of an encroaching, apocalyptic storm on the horizon. He tries to resolve his problems with sedatives and counseling, but during a visit to his mother, we learn of her history of paranoid schizophrenia, which leads Curtis to suspect that it may be hereditary. Are his nightmares a result of a mental disorder or are they premonitions warning him of a natural disaster? Despite the bad economic climate, he takes a risky loan and illegally borrows equipment from work to channel his anxiety into building a storm shelter. His obsessive behaviour causes stress on his marriage and tension within the community. The plot is fairly straightforward, but what makes Take Shelter so special is how it is open to interpretation and speculation, from start to finish. Fans of ambiguity will appreciate how Nichols continuously teases the audience to question whether Curtis is a paranoid schizophrenic, a prophet, or something in between.

Nichols has masterfully crafted a story that is both heartbreaking and harrowing, creating an aura of unease and uncertainty of how it will all end. Nichols opts for a slow burn, squeezing out every ounce of tension by carefully choosing which of his dreams he allows us to see in alarming detail, and which are kept offscreen and only spoken of. To add to the doubt, Nichols enriches his narrative with tiny details to expand on character development: Curtis’s dismissal of religion and church, the death of his father, his troubled past with his mother, a conflict with his brother, his managerial skills at work – and so on. Best of all, Nichols refuses to allegorize the narrative and simply evaluates the onset of schizophrenia with an acute eye. There is no passing judgement, but there is also no clear understanding- instead, Nichols invites us to sympathize with Curtis. After all, mental illness can affect anyone at any time. Indeed, one in four will experience a mental health problem at some point in their lives.

Michael Shannon delivers an unforgettable and powerful performance in Curtis LaForche. Shannon is famous for playing larger-than-life psychotics (Revolutionary Road, Bug to name a few), but here his performance is subdued and restrained while shifting from stable to unstable. While struggling to come to terms with the truth, an explosive public breakdown (the film’s most intense moment) helps him see how little control he has over his life and realize that the biggest threat to him and his family may just be himself. Shannon’s riveting lead performance is a prime example of his ability as an actor, proving yet again, he is one of the all-time greats.

Jessica Chastain is heartbreaking as his no-nonsense wife Samantha, who tries so very hard to hold the family together in the midst of her husband’s increasingly unpredictable behaviour – while Kathy Baker as his mother, Shea Whigham as a co-worker and Ray McKinnon as his older brother all match Shannon beat for beat.

Cinematographer Adam Stone, who also worked on Nichols’s first feature, uses the widescreen frame in creative new ways to focus on the truly unearthly and breathtaking visual effects. A growing sense of dread slowly increases through the visions of cloud formations, lightning skies, tornadoes, electric storms, and other nature-bound idiosyncrasies. These nightmare sequences, in particular, are both harrowing and visually poetic, expressing the anxiety that Curtis experiences day-to-day. David Wingo’s brooding score, composed mostly of ominous chords and bass surges helps set the tone, while at times dialing it down to allow the film’s softer moments to proceed with no instrumental supplements.

From the claustrophobic gas-mask conclusion to the final frame, Take Shelter is wide open to interpretation, with an unexpected twist that may leave some feeling unsatisfied and frustrated. While I’ll admit feeling it was somewhat insincere, I also acknowledge that Nichols is less interested in the fate of Curtis than he is in the importance of family in the face of any sort of danger – physical or mental. Nichols’s catechize of how paranoia, fear, and anxiety have become an inescapable part of modern society is simply a catalyst for showing how much this family can endure in the face of the storm, both figuratively and literally.

Kenneth Lonergan’s Margaret is a Near-Masterpiece