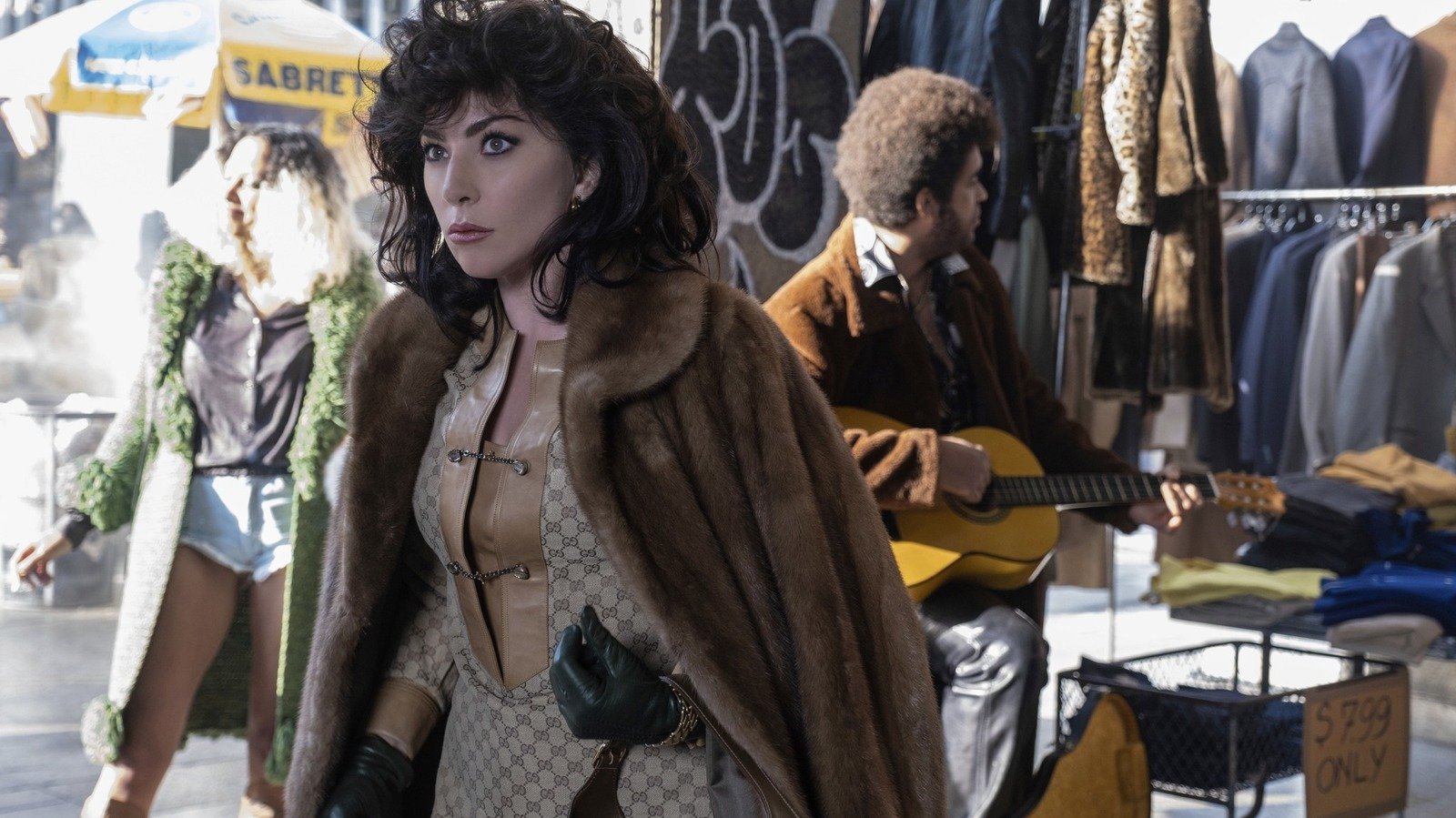 Ridley Scott’s latest film, House of Gucci, is a lavish exercise in excess that provides a cynical canvas for its actors to run rampant.

Excess and glamor fills the screen in Ridley Scott’s true crime biopic of the fall of the Gucci family within their own company. The name is synonymous with class and legacy, but Scott’s latest film tears through both to show a group of unlikable people being devoured by their own egos. Led by a truly remarkable performance from Lady Gaga, House of Gucci is an admirable effort to convey the lengths someone will go to for fame and fortune, but ultimately results in being a soap opera that claws its way to an overlong runtime it cannot sustain.

At the center of the Gucci family’s problems is Patrizia Reggiani (Lady Gaga), who stumbles upon the opportunity of a lifetime when she encounters Maurizio Gucci (Adam Driver) at a party. Calculated in her movements, she eventually becomes the bedrock of Maurizio’s life, much to his father, Rodolfo’s (Jeremy Irons) chagrin. Married and next in line to inherit the Gucci fortune, Patrizia’s whole life will improve dramatically if she can maintain her foothold within the Gucci family.

Gaga’s performance as Patrizia feels one-of-a-kind and of such a different era. Frequently, Gaga is channeling classic Hollywood, giving off Gloria Swanson in Sunset Boulevard vibes each time Patrizia manipulates and reaches beyond her grasp. Like a vortex that sucks in character traits and slowly starts spitting them out as if they’ve been there the whole time, Gaga transforms every beat into a tragedy that only concerns her. Even when House of Gucci doesn’t seem to know what it wants to say beyond “rich people are bad”, it has Gaga’s character to fall back on as a nuanced example of how wealth corrupts.

The screenplay from Becky Johnston and Roberto Bentivegna is a very black-and-white narrative. There isn’t anyone to truly empathize with and those who are given moments of empathy such as early scenes with Maurizio, are often dragged through the mud until they learn that they cannot exist without selfishness and greed. Where Scott surrounded his wealthy, unlikable character in All The Money in the World with empathetic people, here everyone is surrounded by like-minded individuals all clamoring for the same thing: status and wealth. Parasitic as some may seem, they’re also opportunistic, as can be seen in characters like Patrizia and Maurizio’s lawyer, Domenico De Sole (Jack Huston).

There’s an overwhelming hatred aimed towards everyone in House of Gucci, but it’s the comedic moments that stand out. A little bit I, Tonya with its late-act plot developments, almost everyone is comically evil. Each performance is unique, but none play their parts bigger than Gaga and Jared Leto as the bumbling buffoon, Paolo Gucci. There’s a comedy of errors within Scott’s film that lends itself to having these huge personalities bumping up against each other, letting a house of cards collapse on top of everyone. When the comedy mixes with the sleaze just enough, House of Gucci truly captures the essence of its subjects.

Unfortunately, there are many stretches of House of Gucci where the tension and dramatic weight are simply non-existent. With characters that all want to steal the spotlight from each other, it’s hard for any connection between characters to feel realized. Everyone hates each other and it becomes a remarkably boring affair when the film tries to do anything where characters aren’t acting large. It’s an acting film more than an interesting biopic, which the film seems to recognize but doesn’t fully commit to realizing it.

Even with its uneven tone, House of Gucci ends as an entertaining exercise in excess. Gaga’s performance swallows up every scene, making it wholly about her every time she appears. It’s not until the movie starts prying at the wealth of its titular family that it feels like any other character gets to even be acknowledged in the same room as Patrizia. Gaga embodies her to the point where it’s absurd that the movie even tries to have scenes without her. For that reason alone, House of Gucci justifies its existence because otherwise it never really feels like it has anything new to say. Enjoyable enough as it is, it just spins the same old yarn a different way.