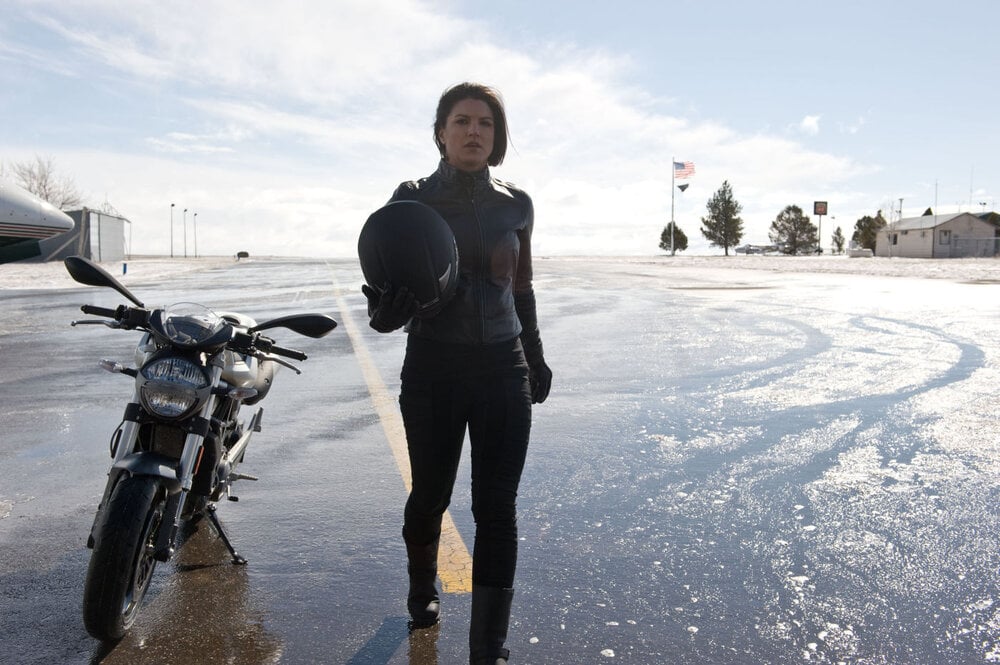 Haywire: They left her no choice…

Haywire reunites director Steven Soderbergh and writer Lem Dobbs, the creative duo behind the masterpiece The Limey. Haywire shares a flashback structure similar to The Limey, though nowhere near as layered and complex. Both films also share a dark moral ambiguity.

The Limey is about a bad man going after a badder man who may have killed his daughter. The bad man is Wilson (Terence Stamp) a British robber. The man he is going after is a record producer and drug money launderer Terry Valentine (Peter Fonda).

The moral ambiguity is thrown in the spotlight when Wilson is picked up by the DEA. While there are misunderstandings and miscommunications, largely because the unnamed head DEA agent (Bill Duke) can’t understand Wilson’s Cockney thieves’ cant, “There’s one thing I don’t understand. The thing I don’t understand is every mother-fucking word you’re saying,” they quickly reach an understanding and Duke’s DEA agent shows Wilson a picture of Valentine’s Big Sur hideout with the address on the back, telling Wilson, “Go with God,” as he releases the Cockney, even though he suspects knows that Wilson has killed multiple men chasing Valentine.

This is partly – the enemy of my enemy is my friend – practical cynicism and partly mission-focused idealism, “Crooks move faster than the system, so if we’re going to clean up the neighborhood, we don’t have time to wait for things like search warrants or trials. Procedure becomes whatever you have to do on the day.”

Haywire‘s Mallory (Gina Carano) lives in a similar world of moral ambiguity. While she works for the U.S. Government, she does so as the employee of a mercenary spy organization run by her ex-lover Kenneth (Ewan MacGregor). In other words, Mallory lacks even the thin cloak of patriotism to shield her conscience. And her conscience needs shielding, as Mallory discovers that what she thought was a mission to rescue a journalist from terrorist kidnappers is in fact a mission to kidnap the journalist from a safe house in order to hand him over to a corrupt arms dealer.

While performing her initial mission in Barcelona with Aaron (Channing Tatum), Mallory chases down one of the fleeing “kidnappers” and (we presume) kills him with her bare hands. When Aaron asks her why she chased the fleeing man when he was running away, Mallory tells Aaron, “I don’t like loose ends.” On what she believes to be a completely different mission in Dublin with British secret agent Paul (Michael Fassbender), Mallory finds the dead body of the journalist and realizes that she has been set-up – that now she is the loose end. (And the “kidnapper” that she killed was actually a bodyguard.)

On the surface, Haywire has a complicated noir plot, the sort of story like Raymond Chandler’s The Big Sleep which once prompted the author, when quizzed about a specific plot point, to confess, “They sent me a wire … asking me, and dammit I didn’t know either.” But, below the dangerous obstacle course that Mallory is forced to run, lies a simpler parable about how difficult it is to find a great female action hero.

This difficulty is not confined to female action heroes. A great action hero must have a fairly rare set of abilities, but to stay a great action hero, (s)he must also lack certain talents. The first responsibility of a cinematic action hero is to sell tickets. To do that, (s)he must be a believable bad-ass – must able to throw a believable punch, but (s)he must also be able to show vulnerability – be able to take a punch. (For the first, think of Bruce Lee fighting a running battle against hundred of thugs in Enter the Dragon or Steven Seagal fighting a street full of goons in Above the Law breaking arms as he plows through them. For the second, think of Bruce Lee in Game of Death taking the kick from a bare -ooted Kareem Abdul-Jabbar and spending the rest of the fight with Kareem’s dusty footprint on his chest or Bruce Willis making his way barefooted across a room filled with broken glass in Die Hard.)

A cinematic action hero can’t be a terrible actor, (s)he must at least be good enough to play an exaggerated version of themselves, but being too good an actor, or, even worse, too good a comedian, means that you can be deflected from action films into what legendary drive-in critic Joe Bob Briggs calls “Indoor Bullstuff.”

There is a very fine line, a razor’s edge between “not terrible” and “good”. Consider the difference between Hulk Hogan and The Rock. Hogan is such a terrible actor that he couldn’t even play himself in No Holds Barred and while he sold millions of tickets as a wrestler, couldn’t sell any as an action hero. The Rock, on the other hand, makes for a perfect action hero except that he has such great comedic timing that between Doom (2005) and Faster (2010), he made nothing but family movies.

It’s even harder for female action heroes for two reasons. First, they also have to be beautiful. Second, film executives are much less patient with women flopping at the box-office in action films than they are with men. Bruce Willis can star in any number of flops and he will still be given opportunities, but when an actress drops one Catwoman or Elektra on their résumé – their career as an action film star is toast.

Consider how few women can really be considered consistent action film stars. Michelle Yeoh and Jeeja Yanin are obvious. Milla Jovovich? Sure. But after that? Kate Beckinsale and Angelina Jolie get dragged into too many non-action films, which was the same problem that Sigourney Weaver had. (It is a global tragedy that the only collaboration between Indiana Jones and Ripley was in the romantic comedy Working Girl.)

If you were trying to invent the perfect female action star, you could do worse than the résumé of Gina Carano: background in Muay Thai like Tony Jaa and Jeeja Yanin, a beautiful cover-girl, experience in the high-stress world of competitive MMA, experience in playing an exaggerated version of herself on American Gladiators. Most importantly, with a 7-1 record in MMA and her only loss against an opponent that was later busted for using steroids, Gina Carano has a legitimate background as an in-ring bad-ass. (Even if MMA purists like my good friend Kevin Marshall sneer at her as a “Pretty girl, okay but not great fighter.” Of course, Kevin would cheerfully admit that Gina would destroy him in a match, even if he reserved the right to criticize her technique while she mangled him.)

Gina Carano’s cinematic fighting style is an interesting combination of MMA and parkour. She can break an arm like Steven Seagal, and like Famke Jannsen’s Bond Girl, she can choke a man out, only where Xenia Onatopp’s technique in Goldeneye was suggestive, sexy and silly, Mallory’s triangle choke of Paul is deadly serious. Gina makes Mallory not just violent and reactive, but thoughtful as a fighter, using her brains to beat larger male opponents. It’s not surprising given her MMA background that Gina’s cinematic fighting style is reminiscent of Mike Terry (Chiwetel Ejiofor) in Red Belt. It is a little surprising that it also resembles Daniel Craig’s James Bond.

Soderbergh and Dobbs keep Carano’s Mallory vulnerable in a multitude of ways: physically, intellectually and emotionally. She is always fighting men. While she is usually better trained than they are, they are all stronger than she is. From very early in the film, Mallory knows that she is manipulated – the men aren’t just stronger than her, they also possess information that she does not have and that she needs. Finally, she is emotionally vulnerable because Kenneth isn’t just her boss, he’s her ex and they have only recently broken up. She starts a physical relationship with Aaron because of his stupidity and operational sloppiness, because he is the brawny opposite to Kenneth’s brains and because she deludes herself that Aaron is so stupid that he couldn’t have hidden agendas like Kenneth.

Soderbergh also keeps Carano off balance by putting her on screen with physical actors, all with more experience than she has: Michael Fassbender, Channing Tatum, Ewan MacGregor, Antonio Banderas. Keeping Carano vulnerable and off-balance keeps Mallory similarly vulnerable. Another way of looking at this is that Soderbergh runs Carano through a gauntlet of action star icons: Magneto, Duke, Obi-Wan Kenobi, Zorro. In wrestling, we call that “giving someone the rub”- giving a new wrestler a series of victories against top-flight opponents to make the newcomer look like a contender.

Only time will tell if Carano really has what it takes to be a long-term female action star, but Soderbergh has certainly given her a successful platform to launch her career.

He also did something a little bit more – hidden in plain sight. Beyond the baroque obfuscations of Haywire‘s plot lies one simplifier: the U.S. Government official Coblenz (Michael Douglas). Everyone in the field either works for Coblenz, is paid by Coblenz, or takes orders from him. It is Coblenz who orders Kenneth to send Mallory to Barcelona. It is Coblenz’ man Rodrigo (Antonio Banderas) who arranges for Mallory to be betrayed in Dublin.

One way of looking at the baroque plot is that Coblenz as a character is doing what Soderbergh is doing as a director: setting up a maze of human obstacles for Mallory to plough through. Why would Coblenz do this? He tells Mallory when she meets him to trade for Kenneth’s location: he wants her to come back to work for the government and earn a government wage, rather than billing the government as a freelancer. In the process, Coblenz sacrifices men, but men who do not work for him: Kenneth and Aaron are freelancers, Paul is a British agent. The only one of his men that he sacrifices is Rodrigo and that sacrifice is both the last piece taken off the board and by no means guaranteed – Mallory could always kill Kenneth before he has a chance to talk and reveal that Rodrigo is the next link in the chain of betrayals.

Coblenz wants Mallory for the same reason that Soderbergh wants Carano: a great female action hero spy is hard to find. In other words, the text of this film is also its subtext and that’s brilliant.