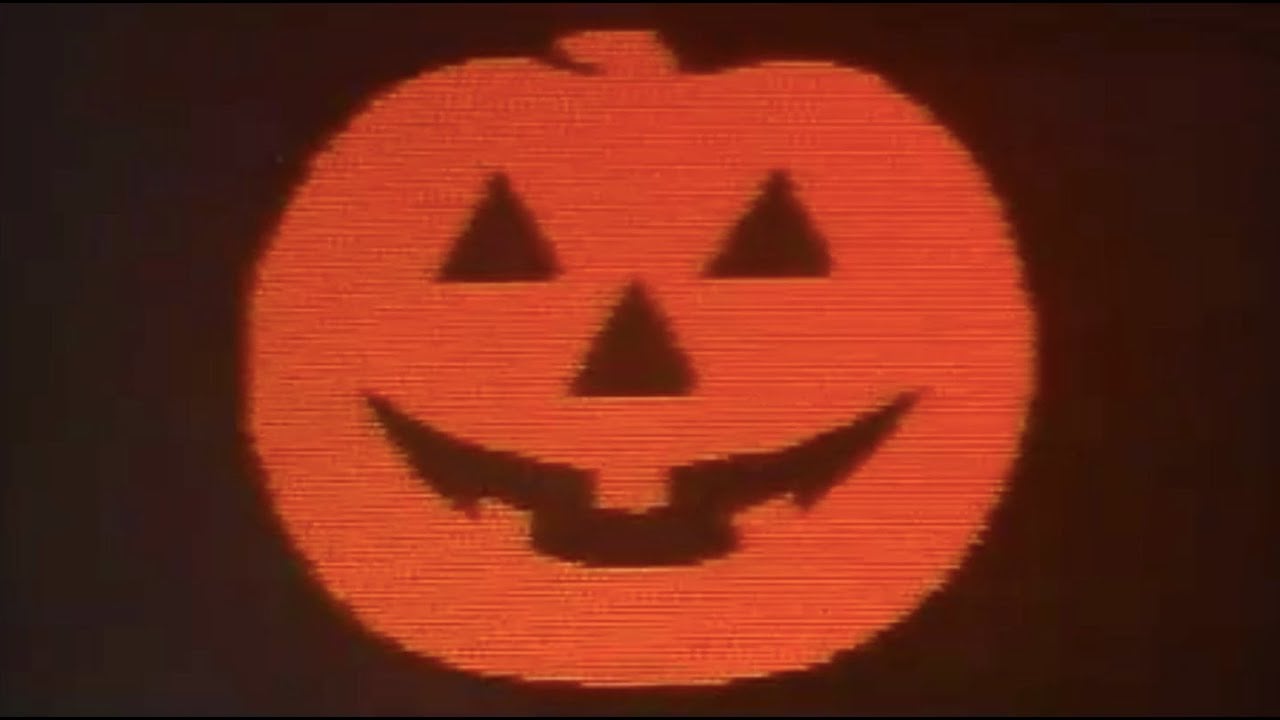 Directed by Tommy Lee Wallace (who almost helmed 1981’s Halloween II), and produced by John Carpenter and Debra Hill, the third entry is known for one thing more than anything else: it doesn’t feature franchise boogeyman Michael Myers, aka The Shape. As explained in the wonderful making-of documentary on Scream Factory’s blu-ray, after the filmmakers set Michael ablaze at the end of II, it was felt that a financially savvy way to continue with the brand name was to create an anthology series. Tommy Lee Wallace re-worked a previous draft and shaped it into Season of the Witch. Equally informative on the subject of III’s creative process is Dustin McNeill and Travis Mullins’ book, Taking Shape: Developing Halloween from Script to Scream.

The plot follows an alcoholic, womanizing doctor, Daniel Challis (Tom Atkins), and love interest Ellie Grimbridge (Stacey Nelkin) as they investigate a Halloween mask company, Silver Shamrocks. They have reason to believe that its owner, Conal Cochrane (Dan O’Herlihy) is up to no good, with something evil planned for the night of October 31st. Stonehenge, Samhain, microchip-altered masks, and a bunch of oddball mayhem ensue.

To mark the picture’s 40th birthday, Tilt Magazine forsakes the usual review format. Instead, the aim is to highlight how, despite its standalone status in the franchise, SOTW’s legacy echoes in future films. So get ready, readers! It’s time! It’s time! And don’t forget to put on your masks!

California: The Sunny Side of Horror – Halloween H20

It is a little curious that for a series which indulges in depicting October 31st in all its autumnal glory – orange leaves whisked away in the Haddonfield, Illinois wind – two entries take place on the West coast. Season of the Witch begins its story somewhere in Northern California (San Francisco is mentioned a couple of times), with the Silver Shamrocks production factory in the fictional town of Santa Mira. A quaint, clean, corporate town with Irish heritage, whose main employer is Cochrane’s enterprise.

With the state known for its brilliant sunny days, it’s little wonder that the filmmakers have most of the story transpire at night. Furthermore, the series retained the services of cinematographer Dean Cundy, popularly referred to as the “Dean of Darkness.” His lighting and mise-en-scène make the sleepy little town draped in Irish smiles a creepy place to hang around for too long.

Flashforward 16 years later, 20 years after the original film, and the series once again chooses the lovely Golden State as the setting for shrieks and terror in Halloween H20. A new fictional town is birthed, this one named Summer Glen. Not very Halloween-y. Viewers learn early on that Laurie Strode (Jamie Lee Curtis) had faked her death many years ago and fled Haddonfield, Illinois. Using a fake identity, she became the headmistress at a boarding school where her son (Josh Harshnet) studies. Of course, astute fans of the franchise know that Michael Myers is an excellent driver, so it isn’t long before he makes the cross-country trek to find his favourite target for more stalking.

One of the many qualities that set the Halloween series apart from the many rival franchises is that, at its core, there isn’t a big mystery to solve. The original film’s opening minutes tell the audience who Michael Myers is and why he’s a terrible human. If he’s at all a human. The following 90 minutes are replete with good old-fashioned tension and grisly murders.

Halloween III, by its very nature, takes things in a different direction. The opening sequence, while weird and thrilling, poses questions to which unsuspecting viewers can only guess the explanations. That’s where Dr. Challis and Ellie come in. The latter desperately wants to find out why her father was killed, the former wants the identity of the perplexing figure who committed the murder in his hospital. This sparks their wannabe detective union (as well as sexual tension, of course), with the road leading to the Silver Shamrock factory out in the country. Together they piece together the clues as best they can, although Cochrane himself ultimately reveals his grand scheme when Challis is held captive.

This was not the last time a male-female coupling of sorts is be prompted to dig up clues that unveil an evil ploy. The set-up returns in the sixth instalment, The Curse of Michael Myers. A grownup Tommy (Paul Rudd) and Kara Strode (Marianne Hagan) caretake for Jamie’s (J.C. Brandy) baby daughter after the mother is unceremoniously dispatched by Michael. Together they find out, through some loopy astrology and primitive internet research, why the elder Myers is keen to off his kin. Together with Dr. Loomis (Donald Pleasence), they seek out the organization orchestrating the evil.

Trust No One – Curse of Michael Myers and Halloween (2018)

One of the big surprises in Season of the Witch is…Who are we kidding? The entire film is one big surprise for anyone expecting Michael Myers to stalk Laurie Strode once again. Setting aside the overall plot’s unorthodox trajectory, one of the film’s twists comes near the very end. The version of Ellie riding shotgun with Dr. Challis as they flee the burning factory is in fact a robot programmed to kill him. Several humanoid robots were seen throughout the film doing Cochrane’s dirty work. It’s less the fact that another was sent to liquidate Challis, and more so that the last one standing was in fact a replica of poor Ellie, whose fate is unknown.

This would not be the last time the rug was plugged over the audience or the protagonists. In Curse of Michael Myers, it is ultimately revealed that the mysterious “Man in Black” from part 5 is Dr. Terence Wynn (Mitch Ryan) an old colleague of Dr. Loomis (Donald Pleasence). Loomis is aghast to learn that someone he trusted deeply has in fact operated in league with the evil folk striving to control the power that guides Michael.

Another duplicitous character shows their true colours in a later instalment. In 2018’s Halloween, Dr. Ranbir Sartain (Haluk Bilginer), the psychiatrist who had taken over Loomis’ work, actually helped Michael escape so he could further study his patient “in the wild,” forgive the pun. Having spent so many years evaluating and trying to pry into the villain’s mind, it seems as if Sartain himself became a villain as well.

Druidism, Samhain, and the Occult – Curse of Michael Myers

One of SOTW’s most interesting angles is how it weaves a creepy tale inspired by the Halloween holiday itself. Granted, in the original 1978 picture Michael returns on October 31st to stalk and kill because he did so the first time on Halloween 15 years prior, but technically it could have been on any date. In Tommy Lee Wallace’s film, the holiday carries weight, especially its Celtic origins.

As Cochrane elaborates before a tied-up Challis, thousands of years ago the antagonist’s ancestors waited for Hallows Eve. On that day the door between two worlds was at its most open and the spirits of the dead could visit the world of the living. Part of the festivities was the sacrifice of animals and children. Hence, Silver Shamrock’s master plan involves microchip-enhanced kids’ masks that will activate at a specific hour and kill them when they watch the company’s tv advertisement. All things considered, effectively creepy. One line of note spewed by the villain is that humans don’t decide such things, the planets do.

Back we go to Curse of Michael Myers yet again. In one of the franchise’s most laborious and silliest plot twists, fans come to learn that Michael Myers is in fact “infected” with a curse called Thorn (“thorn” itself is a letter in Old English, among other lost languages). Said curse was been inflicted by a cult of self-described druids, among them the aforementioned Dr. Wynn, their leader. According to the film, Thorn is what forces Michael to hunt down family members. Moreover, some unbelievable astrology reveals that the prime time to do more killing is, you guessed it, Halloween.

This might stretch the article’s theme to its logical limit, but one need only pay attention to the font and colours utilized in the latest film’s title sequence. Season of the Witch’s blue hue is replicated in Halloween Ends, which is the first clue that David Gordon Green’s picture is going to play its cards differently, just as Tommy Lee Wallace did 40 years ago.

Both films feature very limited screen time for Michael Myers (the serial killer is seen in III in a tv ad announcing that the classic movie will air later that night), making each entry controversial in some minds. In fact, a good few people don’t care much for either in large part for that reason.

In its own peculiar fashion, each explores the notion that evil is not confined to single human beings. It can transcend time, cultures and people. In Season of the Witch, Cochrane aims to hold the first pagan ceremony, aided by high-tech witchcraft, in thousands of years. The malicious acts of his forefathers – they probably viewed the festivities as necessary as per their belief system – carry over to the current generation’s adepts.

Ends loosely plays in that sandbox too. Paganism is absent, but the film explores, however well or clumsily, that circumstances can create evil. When it inadvertently sets its mind to it, a society can birth something bad.  The notion of an evil spirit carrying over from one person to another is another key story element in the 2022 movie. It’s not because one person is evil that the neighbour cannot fall prey when under its influence. The same can be said about successive generations of people and their cultures.

Speaking of Michael’s evil spirit transcending his body, anyone annoyed at the direction Halloween Ends takes should be reminded of how 4: Return of Michael Myers, concludes. In a bewildering cliffhanger, little Jamie (Danielle Harris) turns into a murderer in the final scene, just like her dear, old uncle had been.

To finish, we poke a bit of fun at our own expense with an Easter egg. Then again, we love a good joke. Eagle-eyed fans surely noticed that some children running around in Halloween (2018) and Kills wear the exact same masks as those produced by Silver Shamrocks in Season of the Witch. Sadly, just as in the 1982 picture, we find out in Kills that they meet an inglorious end.

On that note, in our best ominous Conal Cochrane voice, we wish the readers a Happy Halloween.

Ticket to Paradise is Anything But