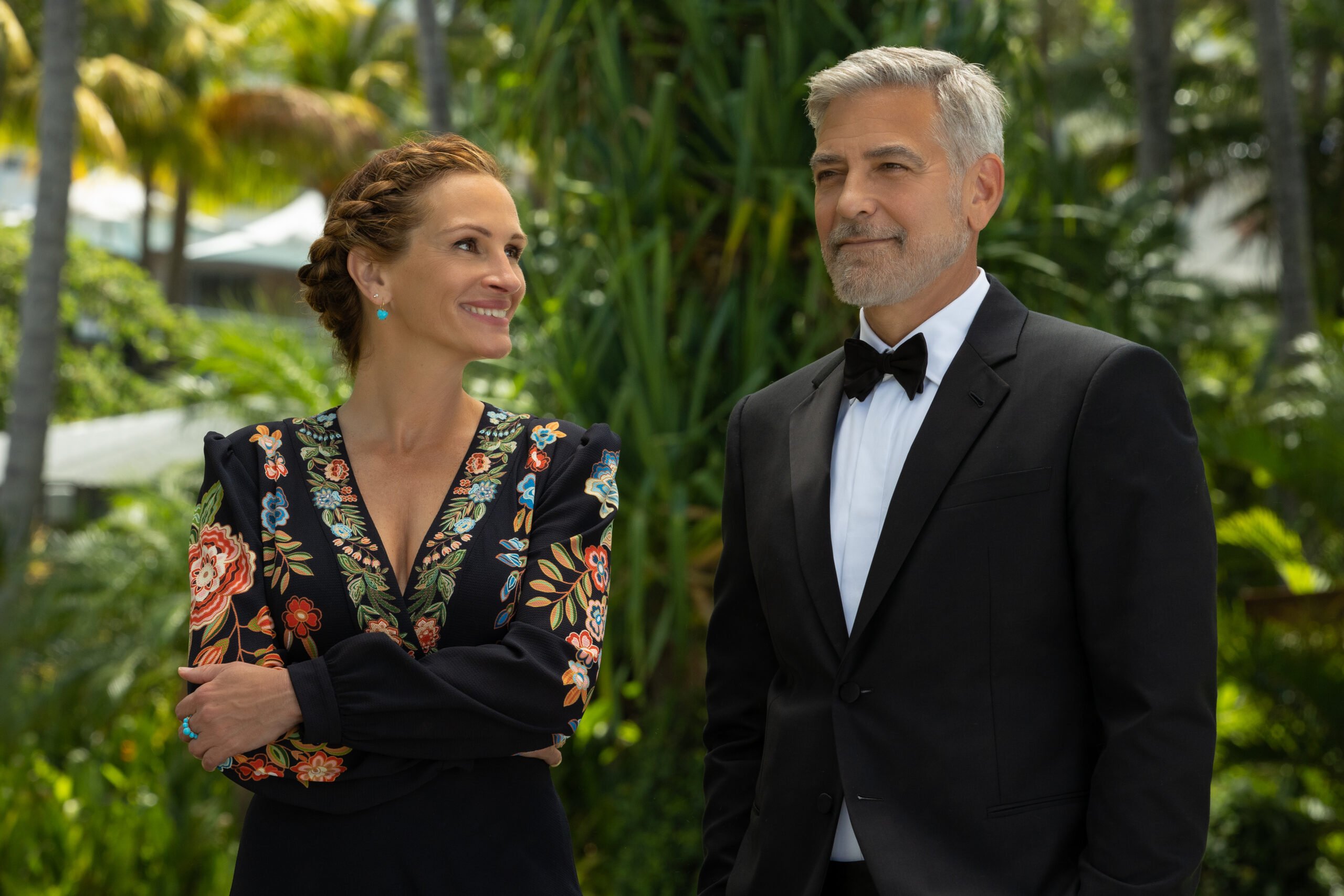 Still Photography on the set of "Ticket To Paradise"

It’s easy to pass off Ticket to Paradise as the quintessential airplane watch, something to put on to bide your time until you move on to bigger and better things. But this ostensibly smooth, airy watch is the worst type of romantic comedy, as it drowns its A-list cast in a D-list script, full of rote gags, derivative one-liners, and eye-roll-inducing plot beats that can be seen coming a hundred miles away. Yet, what makes this experience all the more frustrating, is that it had the potential to be a winner.

George Clooney and Julia Roberts, the last among so-called Hollywood A-listers, play long divorced couple David and Georgia. Both are super successful individuals (or so they appear to be) but are never seen talking about their work, only their failed relationship. Yet, despite their lingering resentment, the two agree their daughter, lily (Kaitlyn Dever, weakly channeling every child of divorce ever), is the only good thing to come out of it.

Lilly, having just graduated from college, envisions a great career in law ahead of her, but before that, she, and her best friend Wren (Billie Lourd) take a graduation trip to Bali. Soon after they land, Lily becomes spellbound by a strapping Balinese seaweed farmer named Gede (Maxime Bouttier, in, perhaps, the film’s worst performance). A few weeks later, she sends an email back to her parents: I’m getting married.

Even though David and Georgia can’t stand each other, they agree to “be in lockstep” in thwarting their daughter’s impulsive decision. They fly to Bali and devise a plan to appear on board with the hastily planned marriage while instilling doubt in the blossoming couple.

What ensues is a blandly conceived, produced, and shot experience that follows the destination screwball comedy formula to a tee. It’s practically made to be played in the background, as director Ol Parker, who co-penned the script with Daniel Pipski, fails to even produce cursory jokes indicative of the genre, with their best gag being Lily shouting “dad you’re embarrassing me”, while Clooney badly gyrates to C+C Music Factory’s “Everybody Dance Now”.  This may have been funny a couple of decades ago, but its luster has not only diminished, but utterly evaporated.

It’s a shame that Clooney’s innate charisma, and excellent comedic chops, are utterly wasted here. His good looks, funny contours, and likable smirks only go so far, taking on a grating effect long before the film enters its third act. While he does add some much-needed flair to the film’s cloying discussion of parenthood, it’s not long before his shtick runs dry. Julia Robert’s instinctive and abundant allure is all but purged in her portrayal of another rich white woman in a foreign paradise.

Dever’s Lily is the walking personification of one-note. While she is capable of solid, wholly clever witticisms (as seen in Booksmart), she never becomes anything more than a person in a love with her hunky boyfriend and picturesque home. As for her Balinese counterpart, he is equally boring, as the film never establishes what truly brought them together besides their good looks. With such cookie-cutter personas, it’s difficult to see what makes the pair stand out from the other thousands of tourists and residents on the island. Billie Lourd’s character is the only one with an iota of personality and, ironically, she is the only one left single. It’s as if the film is suggesting only the dull and unoriginal are deserving of an enchanting existence.

The film’s portrayal of Bali itself is insulting. It’s an unabashedly surface-level view of the culture, that comes across what Crazy Rich Asians would’ve been if told from an anglicized perspective. The Bali of Ticket of Paradise is one that is polished and made appetible for the western palate. What was an opportunity to dive into a fascinating, rich culture amidst encroaching modernity is utterly wasted—as the customs, conventions, and traditions of these people are rendered trite occurrences at best.

Ticket to Paradise has already opened in many international markets and is doing markedly well, indicating there still is an appetite for comedies with noticeable star caliber. However, if the star power is going to be treated with such derivative, creatively bankrupt material, it begs the question of whether forgettable projects are what mostly await them? And, if as audiences, we should demand something more from our aging talents?

Halloween III: Season of the Witch at 40 – Echoing Evil