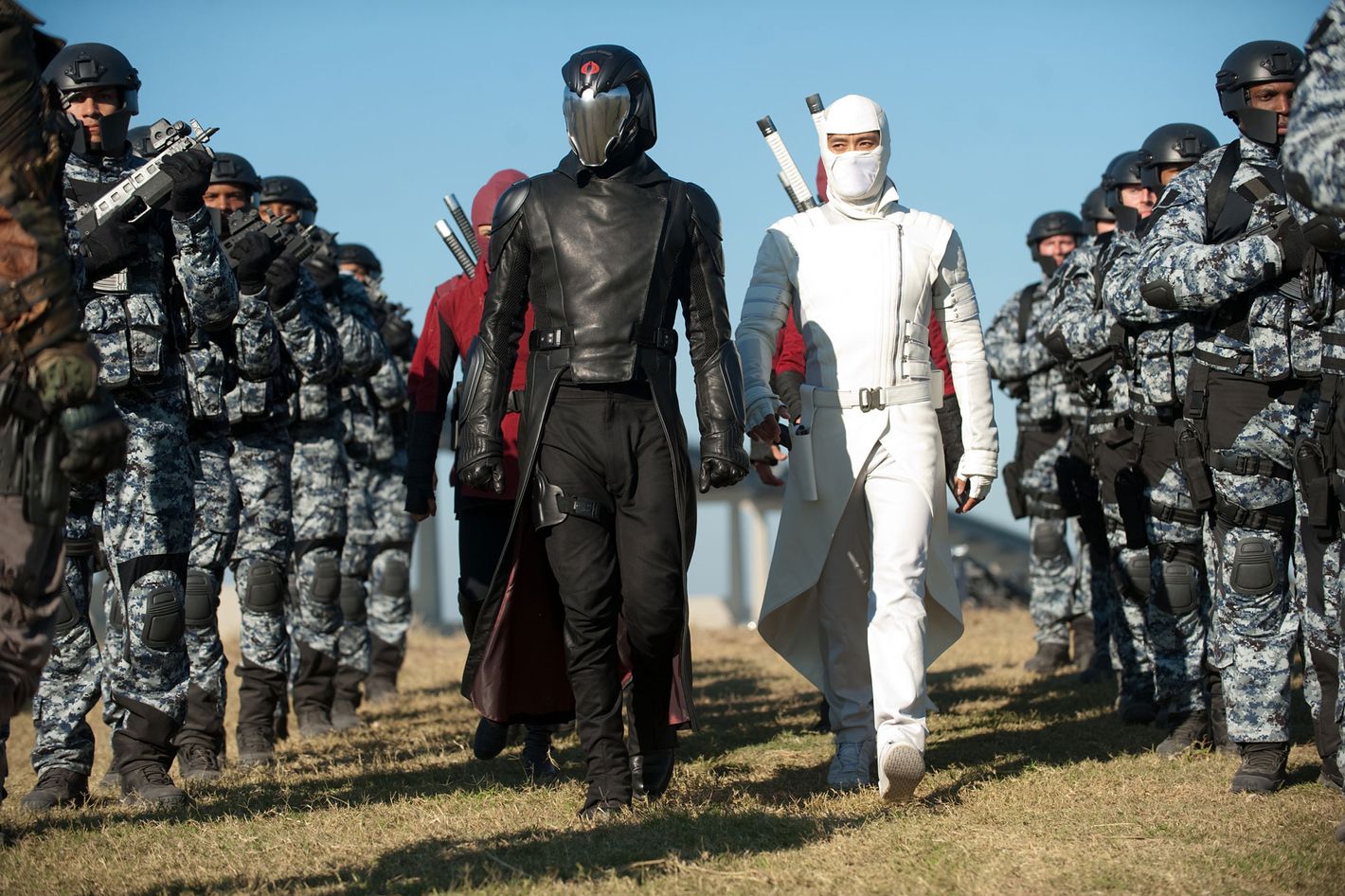 Another example of a blockbuster sequel to a mildly profitable first film that doesn’t actually have an enthusiastic fan base, G.I. Joe: Retaliation is admittedly not on the same level of terrible as its Stephen Sommers-directed predecessor. It is still an awful film but in a different way. Some may have enjoyed elements of 2009’s The Rise of Cobra for an apparent sense of knowing silliness and a relatively light tone, but Retaliation, while still possessing things like RZA playing a blind ninja master, permeates a joyless sense of self-seriousness.

Unlike its predecessor, Retaliation attempts to firmly place itself in some semblance of our contemporary world, with Bono and Jay-Z references and tired jokes about Miley Cyrus and Ryan Seacrest. Beyond that, there are nods towards conflict in Pakistan, with one character calling the country “a riot with a zip code”, and a bizarre series of recurring jibes at North Korea. Jamming triumphalist political discourse into this source material feels woeful. Outright laughable attempts at commentary come elsewhere via an attempted diatribe at military misogyny. In one scene, Adrianne Palicki’s operative Lady Jaye (that name actually being her military handle, not just a sexist nickname from her comrades) describes when her conservative father, a military man himself, cruelly explained that “he couldn’t put his life in the hands of a woman.” Outraged, she enlisted with the armed forces the next day. This monologue of hers is delivered to a male colleague she believes to be looking in the other direction. The scene is primarily shot from his perspective as he sneakily watches her, through the reflection of a TV screen, change out of a figure-hugging dress into revealing underwear and then into still scanty casual clothing. His immediate verbal response to her tale of injustice towards women in the system is to tell her she looks nice.

For a sequel, and one based on a long-existing toy and cartoon franchise, the makers of Retaliation operate in this curious state of both wanting to continue the predecessor’s world and reboot it entirely within the same film. Bar Channing Tatum’s Duke and Ray Park’s mute ninja Snake Eyes, none of the first film’s band of heroes return, nor are those characters played by Dennis Quaid, Rachel Nichols, Marlon Wayons and Adewale Akinnuoye-Agbaje ever even referenced. Tatum, meanwhile, loses leading man duty pretty much immediately, with Dwayne Johnson’s new character Roadblock taking centre stage and Bruce Willis joining the pack in the second act. A bunch of new Joes is introduced in the opening, some even given names, but all but three are wiped out without fanfare within twenty minutes.

On the antagonist front, much is made of rescuing first film villains Destro and Cobra Commander from an underground prison. Finally achieving this goal about forty minutes in, Destro’s colleagues suddenly decide not to free him, presumably because Christopher Eccleston didn’t want to return for this sequel. Cobra Commander’s saviour is henchman Storm Shadow (South Korean star Byung-hun Lee), who actually died in the first film but is back without explanation so that the film hits more demographics in Asia. Cobra Command member Zartan, meanwhile, is off impersonating the President (Jonathan Pryce), a plot development from the predecessor’s final scenes, launching war on the Joes and replacing them with Cobra forces. Why no one else in either the American or international governments questions this appointment is a mystery, considering Cobra is a known source of villainy that eliminated much of Paris in the first film. This is another instance of the film wanting to both honour its continuity and alter it; rebooting the franchise within itself, leaving the viewer a debacle where the creative forces don’t even know the way their fictional universe operates.

Step Up franchise veteran Jon M. Chu was presumably chosen to direct to bring a similar verve to the film’s action. Bar one admittedly well-shot, daft sequence involving ninjas duelling on the side of a mountain, the action scenes are overly reliant on confusing, schizophrenic montage and initiate no sense of thrill or wonder. Free of even base pleasures for an action film, G.I. Joe: Retaliation is just a tiresome, dismal product that’s a worrying avatar for Hollywood reboot culture right now. The lone sources of enjoyment come from the performances of Pryce and Lee, and from an entertaining Walton Goggins as a peripheral prison warden character doomed to suffer by Storm Shadow’s swords.

Snake Eyes Collapses Under the Weight of its Franchise