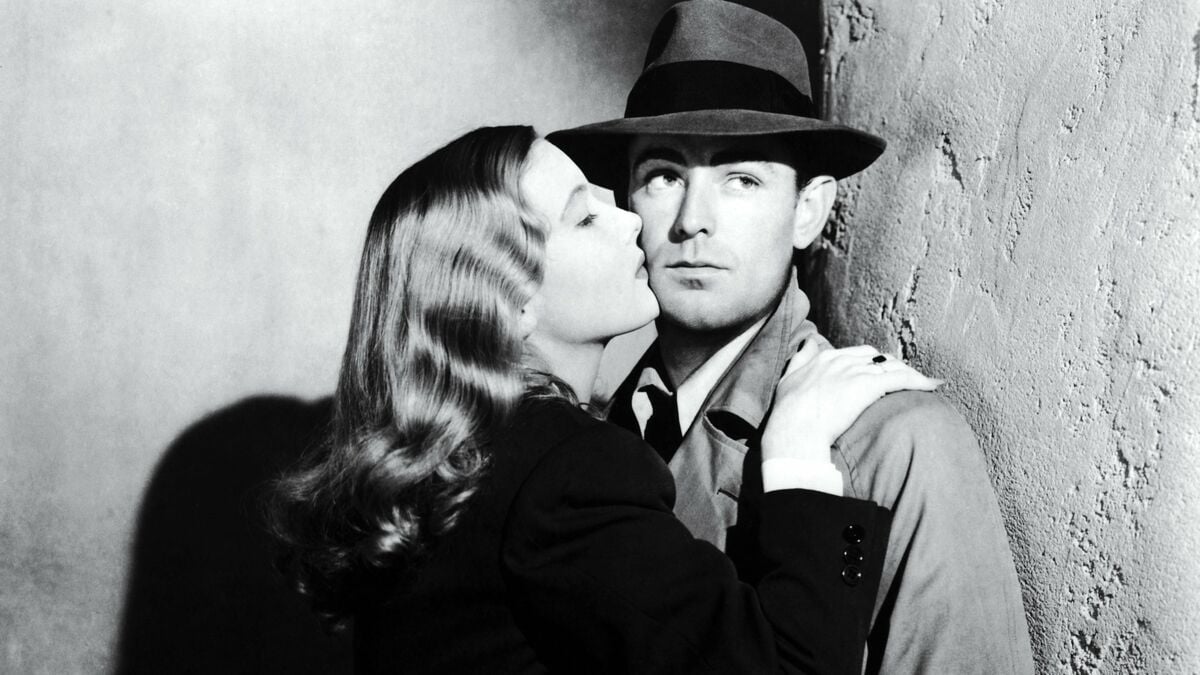 The great American actor Alan Ladd died at the unfairly young age of 50. With a series of leading roles in some timeless classics during the 1940s and 1950s, he carved himself a firm place in Hollywood lore. His quality work in such films as The Blue Dahlia, Two Years Before the Mast and Shane earned him critical acclaim as well as a bevy of movie fans. He could play cool and he could play tough as nails, yet was also clearly capable of demonstrating a subtle humane side to even his most hardened characters. One of the early films of his career that helped pave his way into stardom was in the 1942 Frank Tuttle directed This Gun for Hire, a multi-genre mashing of WWII, spy and film noir themes.

An alarm clock wakes up Philip Raven (Alan Ladd) in his small, shadowy San Francisco apartment room. Still somewhat groggy, he prepares himself for an upcoming job, with viewers left in no doubt as to what that might entail once he loads up his pistol. Raven is, to put it bluntly, a stone-cold killer who carries out hits for clients. Today the client is Willard Gates (Laird Cregar) a powerful man working for a large chemical company and the target is an unfortunate individual who has in his possession an extremely important formula. It is not long before Raven returns the formula to Gates that the latter double-crosses him via payment with marked bills. Raven sets himself out for revenge, but a detective named Michael Crane (Robert Preston) on his trail and, against all odds, the detective’s magician signer fiancée Ellen Graham (Veronica Lake) makes his vendetta all the more challenging to carry out.

Frank Tuttle’s energetic, briskly paced This Gun for Hire is a fantastic example of a film utilizing what the great Alfred Hitchcock coined as a ‘Maguffin,’ something, usually a physical product, which sends the characters in motion throughout the story but in actuality means little in the grander scheme of what the movie itself wants to accomplish. Here, it is a highly coveted piece of paper upon which has been printed an incredibly complicated chemical formula. The document is referenced now and again throughout the picture for it is feared that the duplicitous, cowardly Willard Gates shall sell it to ‘foreign agents.’ In truth, the real fun to be had with This Gun for Hire is in the at times amusing, and at times effectively suspenseful interactions between an entire host of people, some of them major players, others only appearing for a few moments.

The cast is as diverse as is the range of personalities that colour the world of the film. This being the movie which greatly kickstarted Alan Ladd’s value in the movie business, it seems appropriate to begin with him and his role, Raven the hitman. Apart from the mastermind pulling the strings at the chemical company’s headquarters (Tully Marshall), Raven is far and away from the darkest character of the bunch. Here is a man who, when promised the right sum, is merciless in the face of his victims, as is aptly demonstrated in the opening sequence. More than that even, Raven is presented early on as simply a bad seed, physically intimidating the apartment building’s cleaning lady and, later on once Ellen unwillingly stumbles into his path and learns of his motivations, is willing to shoot her, execution-style, in order to silence her. It is a testament to Ladd’s skill as an actor that despite these risible, unnerving qualities, Raven remains an interesting character. Ladd brings a brooding, dangerously quiet charisma to the role that it becomes difficult to take one’s eyes away from him.

His encounter with Ellen, who ostensibly fills the role of the picture’s other leading protagonist, eventually changes his viewpoint, if only slightly. Unfortunately this happens in what is arguably the films’ only truly weak scene, wherein Ellen, based on but a smidgen of personal information revealed to her by her captor, succeeds in unlocking a previously unknown nobility which lay dormant within Raven. Apart from that one moment, Ellen is an absolute joy to watch as the witty, cool cat magician who, due to her professional connections with Gates (his other specialization  consists of scouting for talent for a club), is tasked by the Governor of California himself to sniff out Gates’ ulterior motives. Lake personifies practically everything one could want in a female protagonist: smarts, undeniable wit, gumption and of course a bit of sex appeal. What the scene in which she puts on a sing and magic number for Gates in the hopes of landing a job for a club lacks in in-depth character development it more than makes for by clearly demonstrating how attractive her personality is. She charms the pants off of the men watching her demo act and does she charm the viewer.

One could produce a laundry list of the immediately impactful characters found in This Gun for Hire. Robert Preston is surprisingly fun as a detective who in any other actor’s hands could have been as bland as white bread. In truth, Michael Crane is somewhat of a bland chap, only that Preston plays the part with such earnestness that is becomes very easy to feel for him. Laird Cregar also keeps the film a bit lighter in tone than otherwise might have been the case as the hysterical coward (and very British) Willard Gates. When under the assumption that no harm will come to him he has few qualms about doing evil’s bidding, but quivers in fear upon at the very thought of violence. Marc Lawrence is hilarious as Gates’ driver, Tommy. It never seems as though anything can shake his morale or happy-go-lucky nature. In one scene his very life is threatened, only to be reassuring a petrified Gates not to worry too much just a few scenes later.

Through and through director Tuttle and the screenwriters manage to prevent the film from swaying too far into one particular tone instead of another. Characters the likes of Tommy, Gates, and Ellen provide a lighter mood in some respects whereas Raven is the brutal force whose dark cloud overshadows everything. There are plenty of other fascinating details to the picture indicating that the filmmakers were aiming for something that intended to feel different, fresh but in a strange kind of way. For one, there is the eye-catching design of the chemical company’s head office, which looks to be made entirely of marble. Its minimalist and spacious design makes it appear like a villain’s base in a science-fiction film, reminiscent of the sets found in Fritz Lang’s Metropolis. The CEO himself is a fascinating creation, an elderly man confined to a wheelchair, and experiencing difficulty in gathering his breath to speak but ultimately is revealed to be the nastiest character of all. Then there is the matter of Raven’s unconvincing turn to the side of good in response to Ellen’s reasoning and pleas. She implores him to seek out Gates and discover the truth about his business dealings (which itself is a tactic to use Raven for her own gain) but to do so without killing anymore. Literally two minutes later Raven murders a cop trying to arrest him! Tommy, for reasons stated above, is unto himself a case of bemusing behaviour. Oddly enough, none of these actually hurt the movie, they only add to its colourful charm.

This Gun for Hire may be considered a minor revelation. It offers fans a glimpse at Alan Ladd’s earlier work which helped him gain prominence, features an arresting performance from Veronica Lake, breezes along at a great pace, and straddles the line between disparate identities, almost from one scene to the next. It throws a lot onto the proverbial wall and thankfully a lot of it sticks.

Watch This Gun For Hire