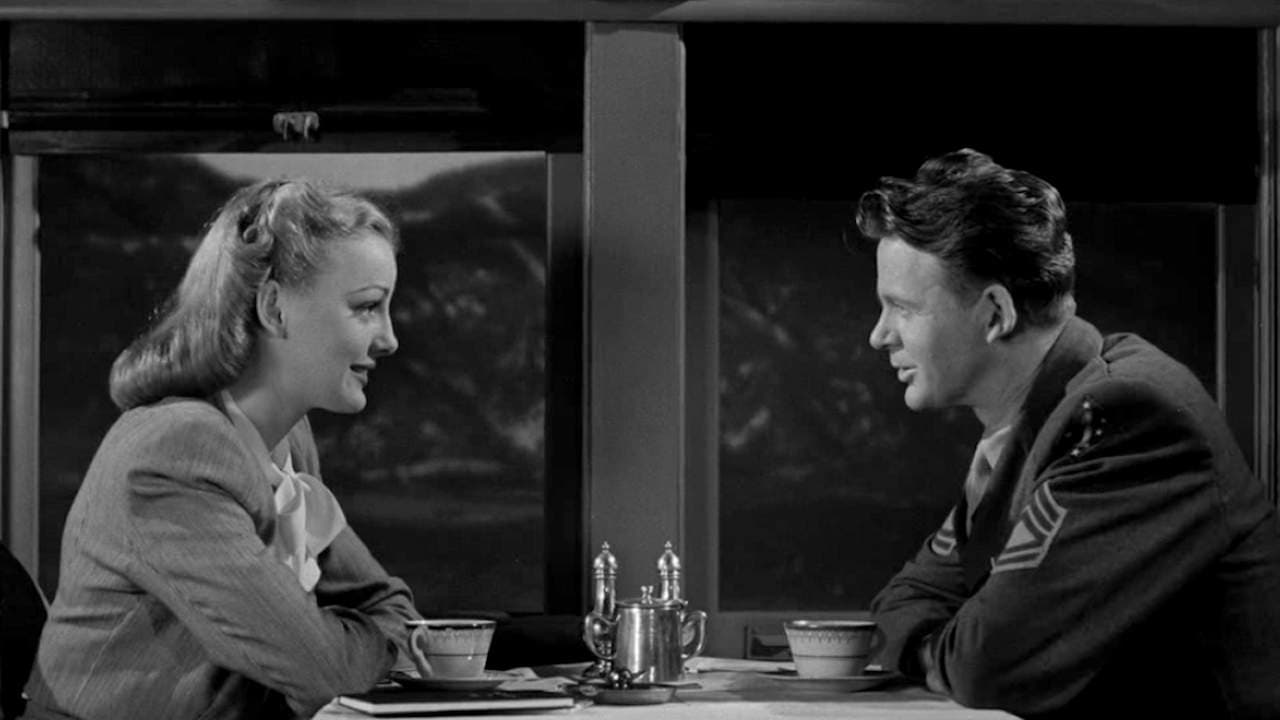 Coping mechanisms vary from person to person, innumerable variable influencing how, why and when an individual must invest a concerted effort in attenuating psychological and emotional stress caused by past trauma. Visits to the doctor, medication, a new hobby, a new job, changing ordinary habits, the possibilities are endless The circumstances become dire when someone engages in what they believe to be a form of therapy to soothe their pain but in actuality only aggravates it without them either acknowledging or recognizing the problem. Such is the dominant theme of Anthony Mann’s odd little mystery film from 1944, Strangers in the Night.

At the tail end of the second world war, American Marine Johnny (William Terry) is recovering from injuries suffered during combat. More effective than any medicinal treatment is the letter correspondences he has with a woman by the name of Rosemary who donated a book to the military and left her name and address within the pages. Happenstance had the book fall into Johnny’s lap while resting, and, noticing the girl’s coordinates, they began to write back to one another and fall in love. Once dispatched from military service, he vows to return stateside and finally meet Rosemary face to face. The trail leads to an old mansion on a hilltop in Monteflores, California where lives her kindly if somewhat odd mother Hilda (Helene Thimig). The latter explains that Rosemary is away for a few days but shall return shortly. All Johnny can do in the interim is to wait for her arrival and rest further seeing he still suffers from headaches. The more time elapses, however, the more he fancies the female (!) doctor (Virginia Grey) who nurses him and begins to question Hilda’s honesty as to her daughter’s whereabouts. What might she want to hide from him?

It has often been the case in the current column that films under review were surprisingly brief in their running time, Strangers being yet another example. In fact, at only 56 minutes, this is by far the shortest film ever reviewed, not even coming close to what is generally understood as the usual running time for a true feature-length production (80 minutes). What is important to remember is that many of these movies were not considered as ‘A list’ projects at the time and were therefore relegated to the bottom half of double bills, which might explain why so many of them, especially the lesser-known noirs like Strangers in the Night, always made a point of never overstaying their welcome. Even with a shortened running time a skilled filmmaker can make something memorable and entertaining (there are a number of actual short films that remind people of this at almost every festival). Anthony Mann, at this stage in his career, was not the powerhouse he would become in the years that followed but one can absolutely detect the seeds of greatness scattered within this brisk, arresting picture. With only so many minutes to tell a proper story, it understandably feels somewhat rushed. Indeed, there probably is a really great version of this story that can be made into a 90 or even 120-minute long film, but what viewers get here in a scant 56 minutes is by no means cheap.

What Mann, his cast and crew do so well, is provide the film with a brilliantly haunting mood. Even from the outset, there is a sense that the film is destined to be a tragedy. William Terry, who is not even the best actor of the bunch, is terrific in his first few scenes when still resting at a military hospital overseas, lamenting that he still does not know what Rosemary looks like. There is a brief lighthearted interlude on a train where he makes Leslie Ross’ acquaintance, yet even that is cut short dramatically when the shuttle skids off the tracks in a horrific accident. While director Mann does not have such epic surprises awaiting in the shadows at every corner, save at the very end, it does help implant in an audience’s mind that the world of this particular film is really bleak. There is a tragedy, sadness, and death everywhere, so much so that it becomes inescapable. This is accentuated by the visual style exercised once Johnny arrives at Hilda’s mansion in Monteflores, from its very location at the very edge of a hill overlooking the ocean (there are even warning signs along the path discouraging drivers from parking their cars too close to the edge, further pointing to the danger that literally and figuratively envelops the house) to the cinematography used in various instances of great dramatic turmoil between the trio of people whom the audience follows within its walls: Johnny, Hilda and the latter’s housemaid Ivy (Edith Barrett).

Mann has his cinematography Reggie Lanning employ evocative camera angles, consistently accentuating the tension and even the ongoing power struggles amongst the trio of characters who inhabit the mansion. Cameras ‘looking up’ or ‘looking down’ at people as they either uncomfortably try to unveil or hide the truth behind what is actually going on are some classic examples of very simple ideas applied to full effect that lends the movie a sense of character unto its own. Other instances feature undeniably eerie lighting in bedrooms and the apparent centerpiece of the home, the immense living room where a portrait of Rosemary hangs above a fireplace. There is a scene late in the film when Hilda visits Ivy in her bedroom before she falls asleep that, from a purely visual standpoint, is akin to a scene straight out of a horror film. Even the fade to blacks that help transition the story from one scene to the next offers some curious optical illusions, such as one that appears, if only for one second, to leave everything in darkness except for Hilda’s face. Very strange and unnerving even.

William Terry is good as the romantically inclined Johnny, but the trio of women offers a far higher caliber of acting, especially Virginia Grey as Dr. Leslie Ross and Helene Thimig as Hilda. Grey is clearly playing the most positive minded person in the film, in stark contrast to everyone else who is wrestling with demons large and small. She gives the picture a bit of requisite punch, thankfully never too much to overdo things, but just enough to make the audience like her. Edith Barrett is compelling as the ever fretting Ivy, however, is it Helene Thimig who owns the movie with her portrayal of the deceitful, elderly, handicapped mother who wants nothing more than happiness for her only child. Her devotion and constant praise for Rosemary is, frankly, obsessive and unhealthy. Case in point, the moment she realizes that not only do Johnny and Leslie know each other but might share some feelings, she immediately turns on the doctor, trying her utmost to keep her as far away from Johnny as possible. Even in scenes that do not include her character, Hilda’s presence is constantly felt because her negative vibes reach so far and wide. It may be a bit of a one-note character overall yet anyone who would hard-pressed to argue that Thimig is anything but fantastic. Physically meek as Hilda may be, she carries a deceptively powerful psychological punch on everyone in the film.

Revelations are made in the final third that may or may not surprise depending on how many mystery films one has seen. Astute film buffs will guess the truth, or at least get close, long before Rosemary’s actual whereabouts are finally explained. The actual reveal matters less than its relevancy to the character arcs of Johnny and Hilda who both used Rosemary as a beacon of their respective salvation. They both long for the happiness that comes from the comfort of another person’s love, platonic, or romantic. For Johnny, it led into the arms of Leslie Ross, a woman who turns out to be far more real, so to speak, than the initial apple of his eye. For Hilda, it leads to her ultimate destruction. Too much hope put into what amounts to an unattainable dream.

No one would argue that Strangers in the Night is Anthony Mann’s best film. As the saying goes, the best was yet to come. That said, it remains a taught, engaging little noir that proved to be an opportunity for a terrific director to flex some muscles, not mention the haunting performance by Helene Thimig.

This Gun for Hire— A Fantastic Example of Utilizing a Maguffin