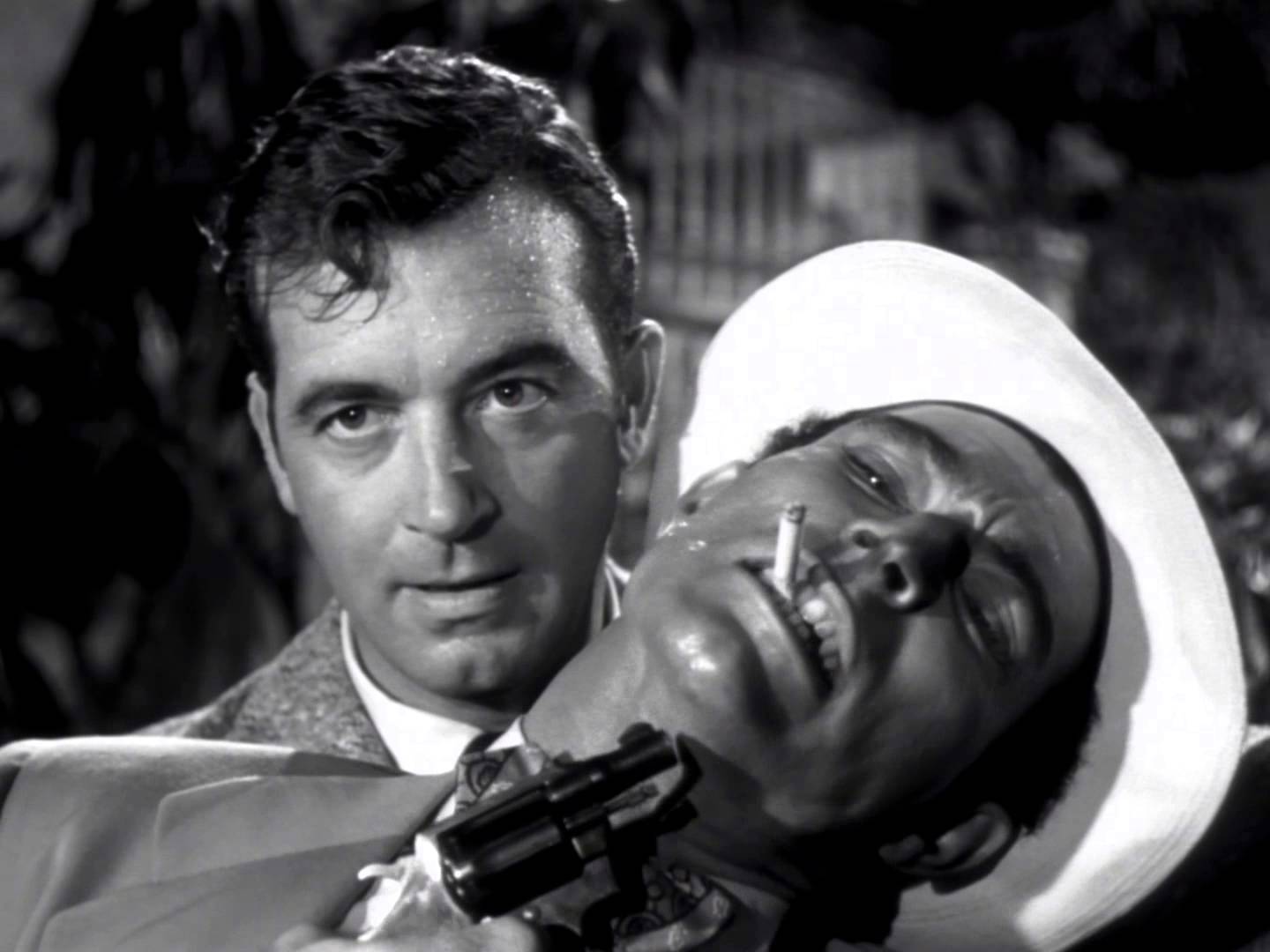 From across the street in a quiet hotel room, a man (Preston Foster) attentively observes the coming and goings of security guards that transport hundreds of thousands of dollars to and from the bank across the street. A plan is brewing in his mind, a plan that will require the assistance of three pawns, all known criminals. They are: small-time gambler Pete Harris (Jack Elam), cop killer Boyd Kane (Neville Brand), and Tony Romano (a young, mustache-free Lee Van Cleef). Each is invited to the man’s room on separate occasions, presented a plan to steal the doe from the guards and make a getaway. Everyone is to wear masks so that no one participant can rat on any other in the event that things go awry. For the masked convicts themselves, the heist is quick and successful, but a former G.I., flower delivery man Joe Rolfe (John Payne), is intercepted by the police and accused of being one of the parties involved in the crime. Nothing could be further from the truth, and when Joe is eventually released from custody, he plans on getting to the bottom of things, even if it means following the crooks down to Mexico.

Cases of mistaken identity often make for tremendously entertaining thrillers. Alfred Hitchcock, in addition to being the master of suspense, was especially adept at telling nail-biting tales of men thrust into deadly plots because of who dangerous individuals or organizations mistook them for. Such a set-up offers a very different array of thrills for audiences, ones that most can easily relate to. It is one thing to imagine oneself tracked down by a psychotic killer, haunted by ghosts, or planted in the trenches of warfare. With a little bit of imagination, one can attempt to ponder what any of those situations would be like. It is a different matter altogether to be the target and suffer the consequences of being mislabeled something unenviable: thief, liar, cheater, plagiarist, incompetent, etc. Everyone, at one point or another in their lives, has been the target of false accusations (and has maybe even been the person making said accusations…).

Joe Rolfe, therefore, suffers the skin-crawling fate of having to clean up a nasty mess left in the wake of trouble stirred by people he was never associated with, a mess that presently tarnishes what little reputation he has left to his name. This starting-off point instantly provides director Phil Karlson’s Kansas City Confidential an easy entry point for viewers. Joe is an ordinary fellow, down on his luck after earning high decorations for his services during the world war. Like many returning veterans, success in the trenches has not translated into success back home. Now lady luck has shunned, chewed, and spat him back out without even an apology. His journey is that of a man seeking an extremely personal sense of justice, yet one that most viewers can comprehend with any difficulty. Ironically, therefore, as much as Joe’s trials and tribulations are personal, nearly anybody can understand where he is coming from. Additionally, rather than be treated like a cipher by the script and direction, the character of Joe is someone likable, thanks in no small part to the star performance by John Payne, who brings a nice sense of warmth to the role.

Director Karlson and his team excel at providing Kansas City Confidential with all sorts of intriguing visual and plot-based cues. Firstly, the film features a longer running length than most thrillers of the era. Whereas these movies generally run from 60 to 75 minutes, Kansas City Confidential is over 90 minutes, resulting in a story that is allowed to breathe like few other entries of the era can. In fact, viewers are taken on quite an elaborate journey from the first minute to the very last. The protagonist does not even show up until a good 15 minutes into the picture, by which time the gang leader has interviewed all the candidates, planned and executed the clandestine operation. It is only by the time the police cars stop the flower delivery truck that Joe’s face is seen for the first time. Director Karlson utilizes the slightly slower than usual pace for a proper buildup and to drop important plot details that eventually pay off sometime down the road.

The other benefit of the deliberate pacing is that all the characters get to shine. The sole individual that is not given proper screen time for minimal three-dimensionality is the cop killer, Boyd Kane. Apart from him, Kansas City takes the time to explore its cast of colourful players, from the revelation that the ringleader is in fact a retired police captain and may have concocted the entire scheme for suspicious ulterior motives, his daughter Helen (Coleen Gray), a law student that strikes up a risky relationship with Joe down in Mexico, to even Tony Romano. Almost everyone involved has an angle, many of which are not made clear until the final third, thus keeping the viewer alert for each and every new clue. Despite that Joe is definitely the chief protagonist, the movie almost passes as an ensemble piece, another rarity among the thrillers of the 1940s and 1950s.

Visually, the film strikes a balance between the chiaroscuro lighting techniques that were popularized at the time and extremely idiosyncratic shots that set the film apart from the fray. Of the photography choices selected by the filmmakers that may strike some as fresh are the regular facial close-ups. Several times throughout the film director Karlson and cinematographer George E. Diskant opt for intimate angles of people’s faces, be they furious, worried, relieved, ponderous, or covered in sweat from the Mexican heat. These instances are invitations to get up close and personal with the characters (almost no one is exempt from said close-ups), lending Kansas City Confidential a uniquely tactile, personal feeling. By providing so many of the actors with these important visual beats, every character is presented as equally important to the story, further reinforcing the idea that the movie strives to be, in part at least, an ensemble piece.

There are a lot of factors that lead Kansas City Confidential to feel like an outlier in the long line of noir dramas and thrillers. It wants to tell a familiar tale of a man unwillingly caught up in an impossibly dangerous situation, but does so in a fashion of its own choosing, eschewing some of the tropes of the period. Impressively, it never strays so far away that the movie becomes unrecognizable to people familiar with film noir. Straddling such a fine line is no small task, yet director Karlson and his crew pull off the coup with stylish aplomb. Let the Kansas City Confidential be the least confidential possible.