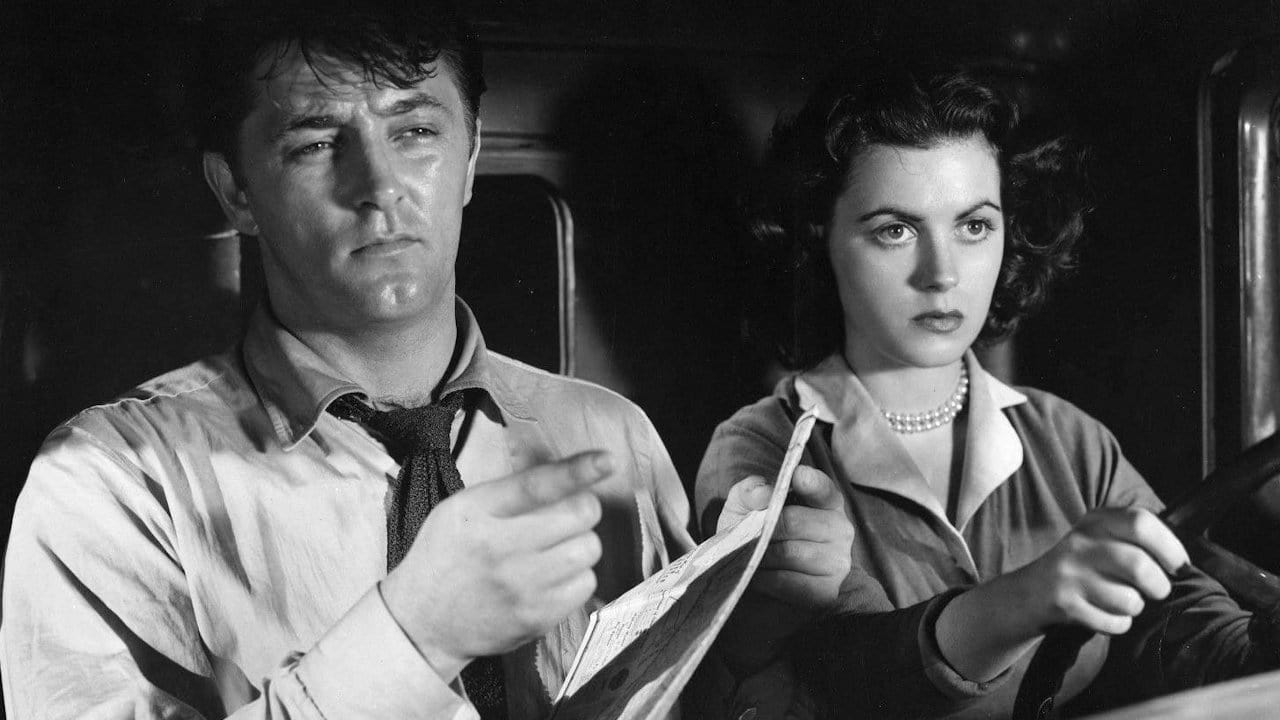 A young doctor falls in love with a disturbed young woman, becomes involved in the death of her husband, and has to flee with her to the Mexican border.

Infatuation is a funny thing. On the spur of the moment, its symptoms exude nothing less than immeasurable positivity. One’s attraction to a particular individual feels good, feels right, feels like it must be satisfied. Despite however powerful its hold may be, everyone arrives at the conclusion that infatuation and love are not one and the same. Love is lasting, whereas infatuation, even if it holds the possibility of evolving into something deeper, is a short-term effect. That does not prevent people from acting out on it, convinced that it is in fact love guiding them. In some cases, regret is all that follows. Robert Mitchum is unfortunate enough to experience that first hand in the 1950 film, Where Danger Lives.

San Franciscan doctor Jeff Cameron (Robert Mitchum) has been working some long, long hours. Just when he thought that his nearly day-long shift has finally come to an end, he is dragged back into the emergency room to assist in reviving a beautiful woman (Faith Domergue) who attempted suicide only hours ago. The circumstances under which she reached the tipping point remain ambiguous, given that the fellow who brought her in mysteriously vanishes without a trace, and the patient, once revived, provides a false name and address to her saviour. Dr. Cameron. It is only the next day that a private message intended solely for him leads Cameron to the woman’s magnificent estate. Cameron’s foolishness gets the better of him though, and despite that he is already involved with a nurse from the hospital, he gives in to this curious individual’s sensual ways, who reveals herself as Margo. Margo is not all that she appears to be, something Dr. Cameron only begins to understand when he discovers Margo is already married to a man much older than herself, played by Claude Raines, who appears in only one 5 minute scene, but makes the most of it by putting on quite the acting class. Before the audience knows it, the two are on the run from the police against Cameron’s better judgement, hoping to make a getaway to Mexico.

Where Danger Lives is a very special little potboiler. Directed by John Farrow, who also worked with Robert Mitchum on the hilarious His Kind of Woman!, the film presents a plot which will be familiar enough to those acclimatized with film noir (a newly formed couple on the run from the authorities), but plays with all of its ingredients in fresh new ways, creating some devices which put an unexpected twist onto the tale two doomed escapists.

What catches the viewer off guard from the very get-go is of course that Mitchum plays a doctor instead of a cop, a private eye, or any sort of ‘man for hire’ operating under the orders of an employer whose ulterior motives are ethically dubious at best. The opening scene has Cameron narrate the tale of an elephant trying to cross a flooded river to a young girl lying on a hospital bed. It plays out as a curious way to introduce the character. On the one hand, he seems comfortable with children, while on the other hand, the tale is harrowing and almost nerve-wracking for a little child, Nevertheless, it gets her to calm down and fall asleep. Already the viewer is given some indication as to what sort of character Mitchum plays: filled with dualities. Without taking anything away from the roles he played prior to Danger or those he would in the years that followed, this film offers what may be considered his most challenging and fulfilling role, or at least one among his most fulfilling. The character is very much dedicated to his work, thus supporting his reasons for wanting to find out who Margo is, presumably in an attempt to prevent her from attempting suicide again, but once she begins to work some of her womanly magic on him, his intentions are swayed. Compounding the demands on Mitchum even further are the physical and psychological stresses thrust upon his role. When Margo makes mention of a father who wants to take her away (the man who is later revealed to be her husband, Claude Raines), Cameron liquors up, takes a cab to her mansion, and confronts her hubby. A frantic skirmish results, leaving Cameron with a severe injury to the head. From that point onwards, Mitchum is essentially playing a man plagued by concussion symptoms (terrible headaches, drowsiness, creeping paralysis), in addition to his increasingly conflicted feelings towards Margo, who not only withholds critical truths from him but increasingly displays some peculiar characteristics of instability. There is also the small matter of his respected position at the hospital, which he is obviously putting at risk by running away with his new flame following a terrible crime he may or may not have actually committed. A lot is asked of Mitchum in this emotionally and physically demanding role. The case can be made that his work in Danger is more complete and well-rounded than anything he has ever done, including his more celebrated roles.

The tension involved in the escape attempt Cameron and Margo venture on is dialed up significantly by the very nature of the issues that handicap both characters. Were Cameron his usual healthy self, none of this would be happening. He would have admitted to faulty behaviour to the authorities and paid the price as an honest citizen. But such is not the circumstances. He cannot think straight, therefore putting his trust far too often in the hands of Margo, a woman for whom director John Farrow only meekly tries to cover up her mental deficiencies, that is until a moment of unexpected lucidity from Cameron during the film’s climax when everything becomes dreadfully clear. By then, of course, it is far too late to ever turn back. One half of the couple is all for the escape, whereas the other half would put an end to all of this foolishness if only he could get his head around things…no pun intended. Credit should be given to whom is it owed. Faith Domergue undoubtedly invests everything she has as an actress in portraying Margo’s hysteria and paranoia with conviction. It does not make her the most likable character (she is, in fact, downright detestable at certain points), but that is more a function of the script than the actress.

Director John Farrow has a knack for vividly bringing individual scenes to life via smart cinematography and editing. One fine example of his astute direction arrives when Cameron first receives his nasty blow to the head from Margo’s husband, whom he nonetheless succeeds in knocking out. He asks Margo to lie the man down while he fetches some water, at which point the camera carefully focuses on the severely injured doctor from behind, the upper half of his body overtaking most of the frame. Because the camera is so close behind, it is impossible for the viewer to understand where exactly Cameron is walking in the house. Shafts of light and shadow overtake him as he proceeds in and out of the lamplight during his impaired walk He finally enters an ostentatiously decorated bathroom, lowers his head into the sink and drenches it in water, as the words of Margo’s husband, words of warning, echo his mind. The cinematography is bold and brilliant during this sequence, and many more examples of Farrow’s skills as a visual storyteller populate the picture, another being the incredible motel room confrontation between the two lovers near the end as Cameron’s paralysis gains further ground. The moment is realized in a single, powerful shot with the camera frame wonderfully placed so as to leave just enough of what transpires up to the viewer’s imagination.

One final remark should be made about the impressively vast supporting cast, among them Maureen O’Sullivan, Charles Kemper, Billy House and Philip Van Zandt. Each plays a lively, memorable individual that makes a strong impact on their respective scenes, to the point where their cameos nearly outshine stars Robert Mitchum and Faith Domergue.

Where Danger Lives appropriates a popular film noir tale but injects it with some new life, thanks in large part to Farrow’s intelligent direction, a cleverer than average script and a full lineup of actors and actresses who bring their best stuff.