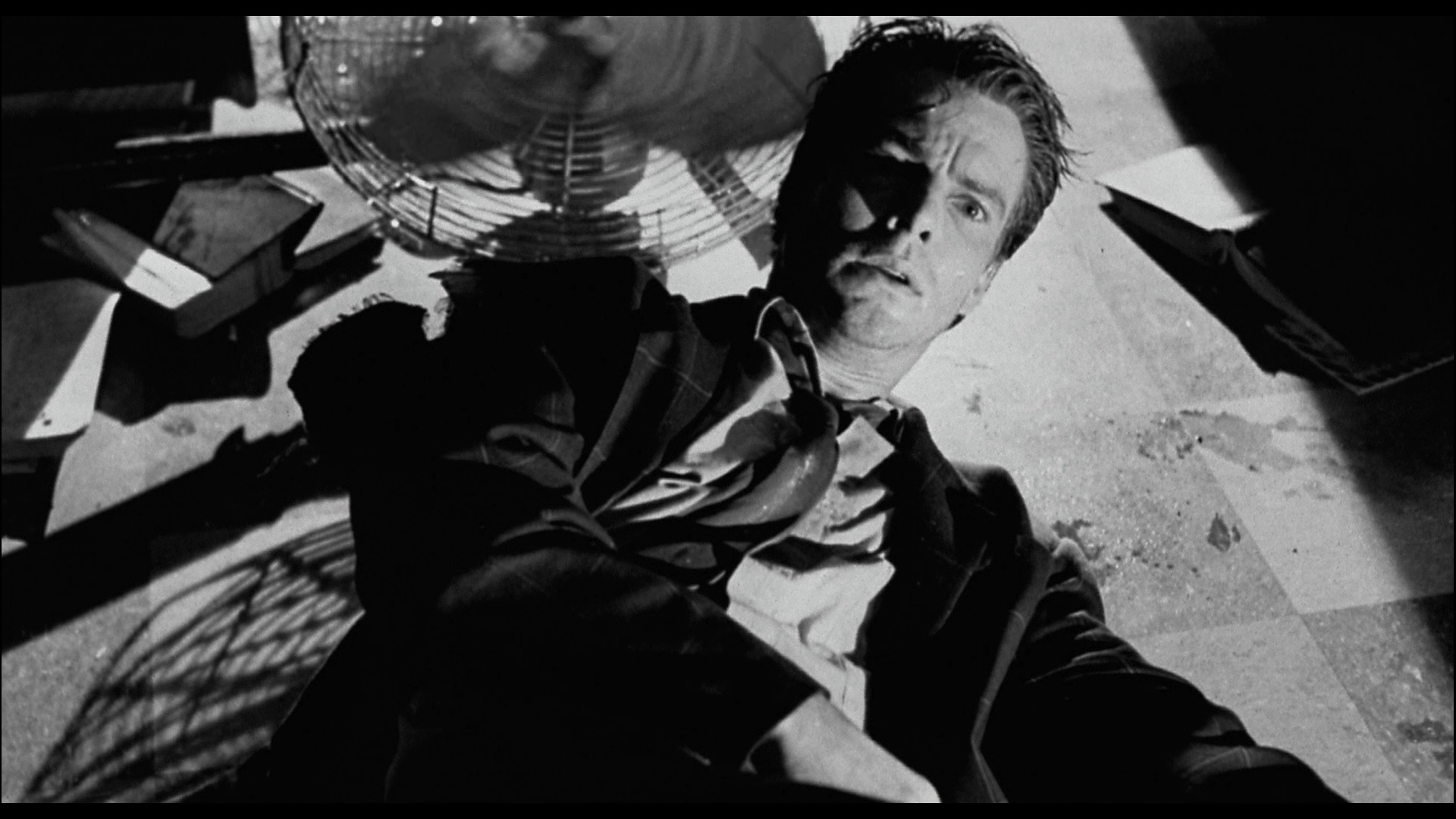 In a terrifically dramatic opening, D.O.A. begins with a series of smooth tracking from behind one man as he walks the corridors of police headquarters whilst the credits appear at the forefront. When the man’s face is revealed, the viewer learns that it is actor Edmond O’Brien, here playing one Frank Bigelow, modest accountant and public notary. Once seated with the police captain he reveals that he has been murdered! Is Frank Bigelow a ghost? No, but he is a dead man walking as the viewer quickly learns when the picture flashes back to the start of Bigelow’s tale when he chose to go on vacation in San Francisco alone, much to the initial consternation of his infatuated girlfriend Paula (Pamela Britton). It is at a bar one night in San Francisco that a mysterious figure deftly spikes Bigelow’s bourbon drink with a dose of poisonous iridium. The doctors stun Bigelow upon revealing that he may only have days to live. With so little time left he desperately hunts down those who wronged him.

The concept that sets everything in motion in Rudolph Maté’s D.O.A. is highly captivating: follow a man who knows he is doomed to expire within a matter of a few days and yet, because he knows that his damnation is the product of another’s attack, is driven to leave no stone unturned in a quest to bring the culprit to justice. The film smartly and effectively depicts the protagonist’s changed allure when desperation calls, this after the viewer has had a taste of his persona before the crushing blow dooms him. With the always riveting O’Brien depicting the character, Bigelow becomes more than just a construct and an audience surrogate. He is a living, breathing individual who comes to realize a thing or two, guided in no small part by a completely new objective in life, no pun intended.

D.O.A. Shows that One’s Perception of Everything Changes in the Face of Certain Death

The attitudinal shift experienced by Bigelow is not to be overlooked. The film makes it abundantly clear in the early going (once the flashback has begun after the opening at the police station) that Bigelow is a man who seems only so committed to his colleague and main squeeze Paula. She cares for him deeply and never hesitates to express it. In contrast, Bigelow struggles to reciprocate the same intensity of feelings, appearing standoffish in the face of Paula’s more obvious demonstrations of affection. Not only is the decision to leave for San Francisco alone a bit concerning, once there Bigelow is easily swayed into having a good night on the town and go so far as to attempt a pickup or two. While it would be unfair to describe the protagonist as a bad person, he definitely has his share of faults, not the least of which is his refusal to fully commit to a relationship with someone as charismatic and genuine as Paula. All this, changes periodically of course once the strange pains begin to afflict Bigelow the morning after his night out. When no less than two different medical specialists confirm that the hero is a dead man walking, the intensity with which he commits to everything, including Paula’s love, is played with vim and verve by the filmmakers and O’Brien in particular.

An interesting bit of information on director Rudolph Maté’s career prior to D.O.A. is that his first profession in the film industry was that of cinematographer, even earning some Academy Award nominations. Some of his most celebrated efforts include Foreign Correspondent, Sahara, and Cover Girl. It was in 1947 that he applied his craftsmanship to directing, proving stunningly productive in the process. Consider for a moment that three later in 1950 he directed his third (No Sad Songs for Me), fourth (D.O.A.), fifth (Union Station, another noir) and sixth (Branded) films, testament to his workmanlike ethos and commitment to telling a diverse number of stories. Both his presence and that of the great cinematographer Ernest Laszlo explains why D.O.A. sports the dynamic, frequently action-packed look that it does. From the aforementioned opening shot of the picture to the frantic, very modern looking tracking shot of a stunned and frantic Bigelow running wild in the streets of San Francisco immediately after learning of his fate, D.O.A. has a number of eye-catching shots and sequences.

While not a tracking shot, another one of the film’s sensorial highlights is when Bigelow, now incrementally closer to the truth, finds himself in the midst of a tension-ridden game of cat and mouse with a gunman in a dingy, eerily lit and empty factory. The sound of feet clanking off the metal walkways, the monstrous shadows created by the machinery around him, the booming echo of shots fired, the maddening mystery of where his predator is ensconced, director Maté combines these elements to produce one an excellent action-suspense piece.

The eventual reveal of who performed the assassination attempt and why, while not as engaging as the overall energetic mood and pace of the picture, speaks to the flippancy with which the worst of ne’re do wells consider human life. As it turns out, Bigelow, the focal point of the film, is not in actuality the primary target of the villain’s plot but rather a peripheral victim who had to be liquidated simply because he knew too much with regards to a recent transaction he signed. His unfortunate, circumstantial involvement in illegal purchase of a toxin (the illegality of which was unbeknownst to him in the first place) has turned his life upside down, proving that even the most remote details of one’s work, social life or personal activities can leave a dumbfounding impact on oneself.

D.O.A. clicks along at a breathtaking pace, striking a nice balance between providing the viewer just enough time to intake additional plot points before racing to where the new clues take the protagonist. The film doesn’t necessarily run shorter than others of its ilk and period but feels refreshingly brisk, a sign that most of the elements, from script to direction to action, have fallen into place. While cinephiles need not rush as madly as Frank Bigelow does to seek the film out, it certainly earns a strong recommendation.

Editor’s Note: This article is part of a weekly Friday Noir column.