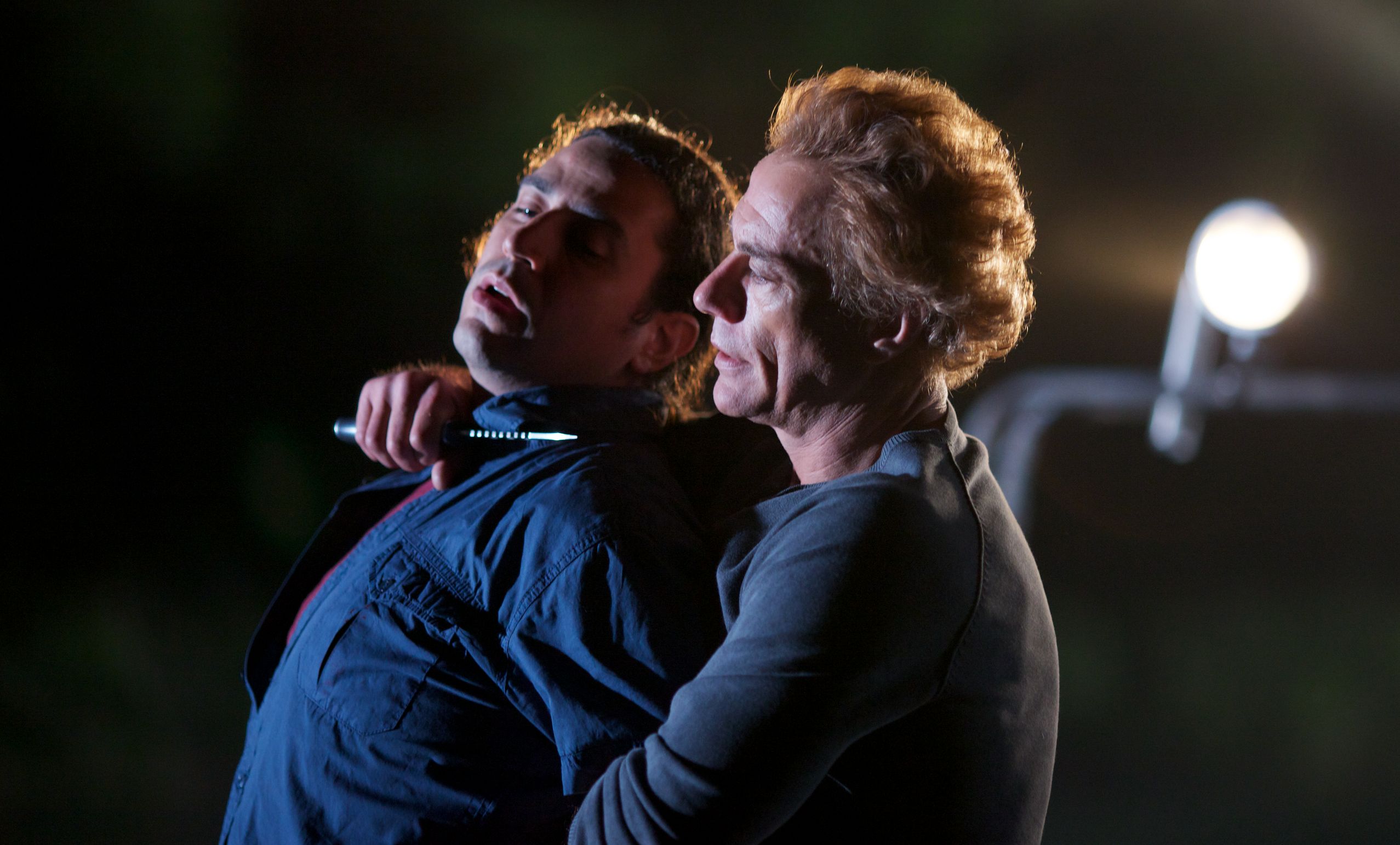 Jean-Claude Van Damme’s first starring role was as a villain: he played a stoic Russian heavy in No Retreat, No Surrender 2, which led to his casting as the hero in Bloodsport, which catapulted him to stardom. Only now, after a career worthy of two or three True Hollywood Stories, has he returned to villainous roles. His Joseph Conrad-inspired turn in Universal Soldier: Day of Reckoning was impressive, but with Enemies Closer, he finally gets in touch with his full-on, utterly insane inner bad guy.

The setup is so simple that the film barely needs any exposition at all: a small plane full of heroin crashes near a Maine island park. Tom Everett Scott plays the park ranger who has to juggle that situation with the problems posed by a mysterious interloper on the island played by Orlando Jones. Scott and Jones are perfectly acceptable as unlikely badasses, but neither of them is the main attraction. That would be Van Damme, as the French-Canadian drug dealer in search of his merchandise who’s willing to kill anyone and everyone to get it. Between his French accent, the ludicrous hairdo he’s saddled with, and his wild non-sequiturs about being a pro-environment vegan, Van Damme hams his way through this movie like a karate-kicking Tommy Wiseau and is every bit as much fun.

Wiseau isn’t precisely the right comparison, as there’s no doubt that the comedy in Van Damme’s work was intentional. Enemies Closer is a clear homage to the Die Hard rip-offs that filled theaters during Van Damme’s prime; although the plot is a little more complicated than “Die Hard on an island,” it’s not by much. The best films among that genre were made by their villains, such as Tommy Lee Jones’ inspired madness in the Steven Seagal vehicle Under Siege. This script clearly plans to take the aging hippie villain from that film, update it for the present, and turn his comical insanity up to 11.

Of course, a Van Damme film also has to have karate fights, but the fights in this film are of a different flavor. Gone are the leaping helicopter kicks that made Van Damme a star, even though a viral video showed that he is still as flexible as ever. Instead, a team of Russian stuntmen inflects the fights with mixed-martial-arts-style grappling. Almost every hold is some kind of flying or rolling joint lock, adding an acrobatic element that was completely unexpected given the face on the movie’s poster.

The biggest drawback of Enemies Closer is that it takes place over the course of a single night, and veteran director Peter Hyams (who directed the Van Damme outings Timecop and Sudden Death) stages the entire affair with realistic lighting. A number of action sequences, especially a tree-climbing fight near the climax, are muddled in the dark and would have been far better if done during the daytime. Still, the look of this film is impressive given a clearly minuscule budget, and the lighting is more than good enough to show Jean-Claude Van Damme going enjoyably bonkers, in a way he’s never done before.