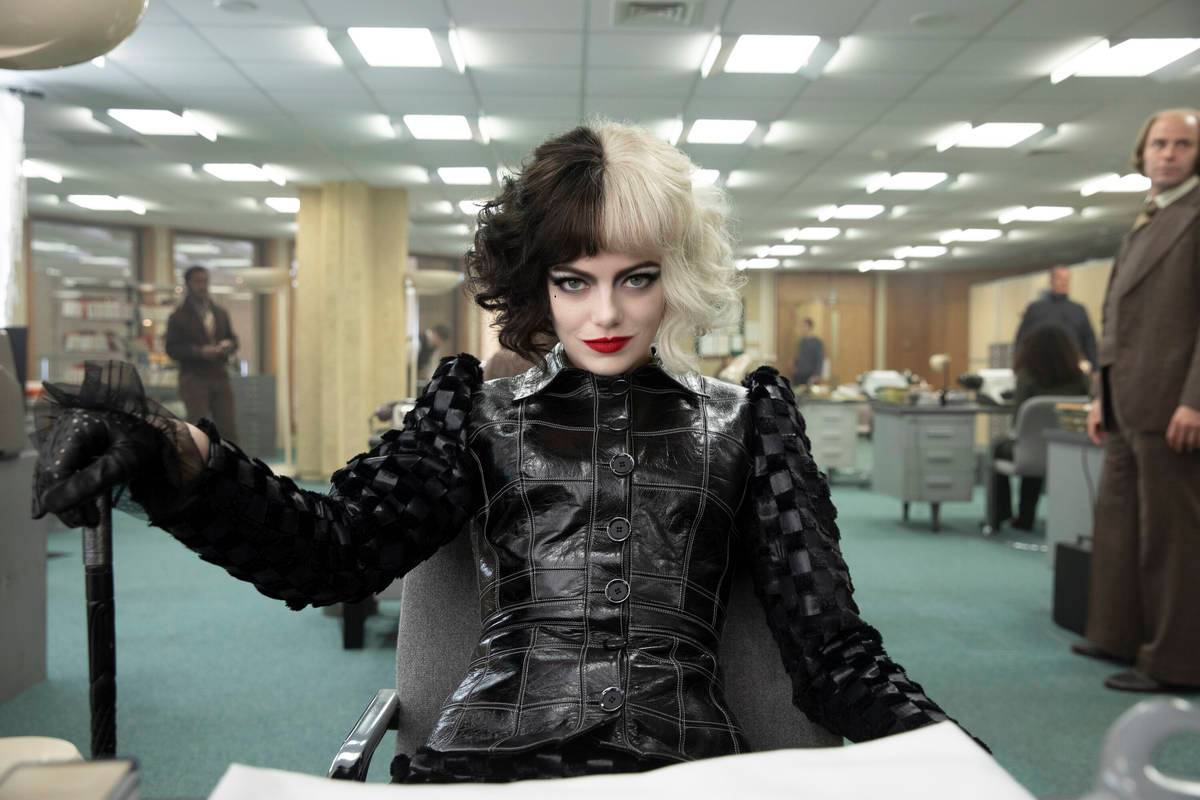 Substance isn’t required for one to enjoy a film although it certainly helps. Disney’s 101 Dalmations big baddie origin story, Cruella, is lacking in this area but makes up for it in other ways. Whether the scale tips toward a favorable viewing or not is, of course, subjective. Beauty is in the eye of the beholder after all.

Unlike the titular character’s hair, reviewing this movie is not a black and white process. Do stylish aesthetics excuse a lazy and superfluous plotline? Does the needlessly long runtime detract from the killer soundtrack? Are the impressive hair, makeup, and costume achievements tarnished by the overly quippy dialogue?

Cruella is a grand, dazzling spectacle that has its charms, but for full enjoyment, one must lower their expectations considerably.

Cruella’s backstory is too lengthy and involved which sets up a choppy pace and mood for everything that follows. It never is able to shake off that cumbersome expository bulk, and, overall, the film suffers for it.

The purpose of these villain origin stories is to make the audience care about the already established antagonist in a protagonist’s light. Cruella overachieves by trying to fit too much into a rather simple narrative.

Disney villains are a fascinating bunch and can often dominate a hero’s story. A sea witch who collects souls is more interesting than the mermaid that collects things. A princess whose main characteristic is being “the fairest of them all” sounds pretty basic and boring, however, an evil queen obsessed with her own vanity offers much more complexity.

Cruella is no different—even though it is trying to be different by centering the villain. The Baroness (Emma Thompson) is a more compelling character than the eponymous one. While Cruella (Emma Stone) is fun and campy, The Baroness has more appeal simply by default. She is the antagonist to the central character who just so happens to be the “bad guy.”

A villain to the villain.

It’s a little too meta to work with the same approach to a classic Disney tale. Cruella seems to have an identity crisis as it attempts to follow two models: an origin story and a hero/villain narrative. And, sadly, the result is muddled.

In the battle of the Emmas, Thompson fares better than Stone. Thompson’s Baroness is delightfully evil, but so is Stone’s Cruella. With two villains battling it out, one will inevitably outshine the other, and even though she is disgraced in the end The Baroness remains victorious in terms of role portrayal.

Stone’s best performance, in my opinion, will always be as Olive in Easy A. Nothing Stone has done since has quite lived up to that easy brilliance, including her Oscar-winning turn as Mia in La La Land. In contrast, Thompson is consistently superb with a filmography full of range and roles elevated through her mastery of the craft. Cruella invites comparison by pitting these two against each other and consequently weakens its main character.

Is Cruella a villainous heroine or a heroic villain? The film can’t seem to make up its mind in the direction it wants to go, and this stems from the development of the script. Perhaps it is a case of too many cooks in the kitchen. Cruella boasts three credits for the story and two for the screenplay. The themes are never able to achieve harmony and each plot point ends up fizzling out, only to be replaced by another.

Similarly, the film does this same thing with its “tributes” to other films. There is the fitting and appropriate nod to The Devil Wears Prada. Then it gets a little too tributary of Ocean’s 8 with the necklace heist. A hodgepodge of other instances is scattered throughout, like the dress changing through a flourish of fire à la Katniss Everdeen in The Hunger Games: Catching Fire.

Despite its missteps, though, Cruella gets some things right, mostly in the visual vein. The sets and locations are grand and moody. The costumes are chic and exquisite as is Cruella’s distinctive makeup look. The elaborate red carpet fashion wars segment adds a particular panache and lots of high-voltage glam.
There’s enough flash and cheeky mischief for summer viewing fare, but if you’re looking for a cinematic experience with substance, you’d be barking up the wrong tree with Cruella.

The Conjuring: The Devil Made Me Do It is too Formulaic and Weighed Down to be Scary