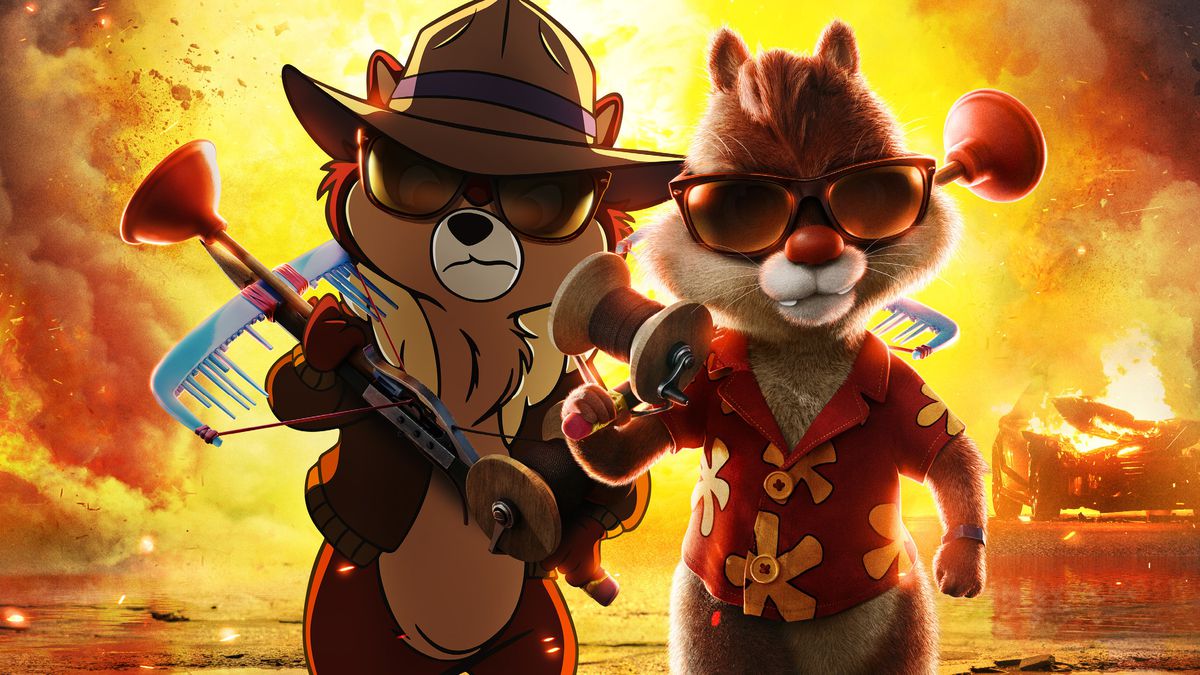 As the entire movie industry seems to be peddling nostalgia and studios leveraging their IP with varying degrees of tact, Chip ‘n Dale: Rescue Rangers winds up feeling like an updated retread of Who Framed Roger Rabbit. Clever in its storyline surrounding bootleg animation and bountiful in its oddball references that acknowledge an industry with a varied history, Chip ‘n Dale: Rescue Rangers takes a nostalgic property to provide a canvas for a fun, endearing adventure.

Decades after the two parted ways following the cancellation of their hit show, Chip ‘n Dale: Rescue Rangers, Chip (John Mulaney) is now working a desk job while Dale (Andy Samberg) attempts to hold onto his glory days by attending conventions and keeping up appearances (quite literally, as Dale underwent CG surgery to go from animated to computer-generated). However, once Monterey Jack (Eric Bana) is kidnapped, the two are forced to work together again to save their friend before he gets “bootlegged”.

By far, the most interesting element of Chip ‘n Dale: Rescue Rangers is the bootlegging process and how it weaves into the plot. If you’ve ever seen some of the variations on popular characters that pop up in other countries that seem vaguely illegal, you’re an easy mark for the jokes centered around “bootlegging”. Cartoons appear to be being kidnapped by someone and being shipped out to other countries after undergoing surgery that slightly alters their appearance to avoid copyright infringement so the prospective buyer can make money without any issues.

A funny concept in itself, Chip ‘n Dale: Rescue Rangers also features a lot of cartoons that you simply wouldn’t think of unless someone reminded you. It’s essentially a hodgepodge of random B-sides that leans into the film’s ideas around rejection in exchange for a more sterile, wholesome image. The perfect example is the inclusion of Ugly Sonic (Tim Robinson), whose rejection by the internet due to his human teeth and generally ragged appearance has turned him into a spiteful character forced to claw his way back to fame.

The true star of the show is all these references and forgotten cartoon characters that serve the film’s general celebration of the history of the animation industry. Unfortunately, they also make up half the jokes in the film, and while Chip ‘n Dale: Rescue Rangers is funny, it’s also never as good as its references and initial premise. Kudos to the lawyers who wrangled up all the weird properties they could muster and not have the door shut on their face for trying to include Ugly Sonic in a Disney movie.

When the film veers away from references, it becomes clear that the relationship between Chip and Dale is tenuous at best. While that is the point at first, the chemistry never really pops off despite Mulaney and Samberg themselves being comedic forces. In addition, the juxtaposition of live-action and animation only draws unbecoming comparisons to the superior Who Framed Roger Rabbit – a film that made a much more significant commentary on Hollywood’s relationship with the animation industry while also pulling in recognizable cartoons.

Chip ‘n Dale: Rescue Rangers feels too niche, and while Akiva Schaffer’s direction gives the film energy very similar to other projects from The Lonely Island, its plot feels too standard, the big moments too broad, and the central relationship too thin to really leave a lasting impact. It’s a fun film that does an admirable job at trying to take a more unique approach to the idea of intellectual properties as disposable, but it’s hard not to just wish you were watching Who Framed Roger Rabbit? – a movie that has its tone and premise married in a far more cohesive and organic way.

Prometheus: Do Not Question the Creator