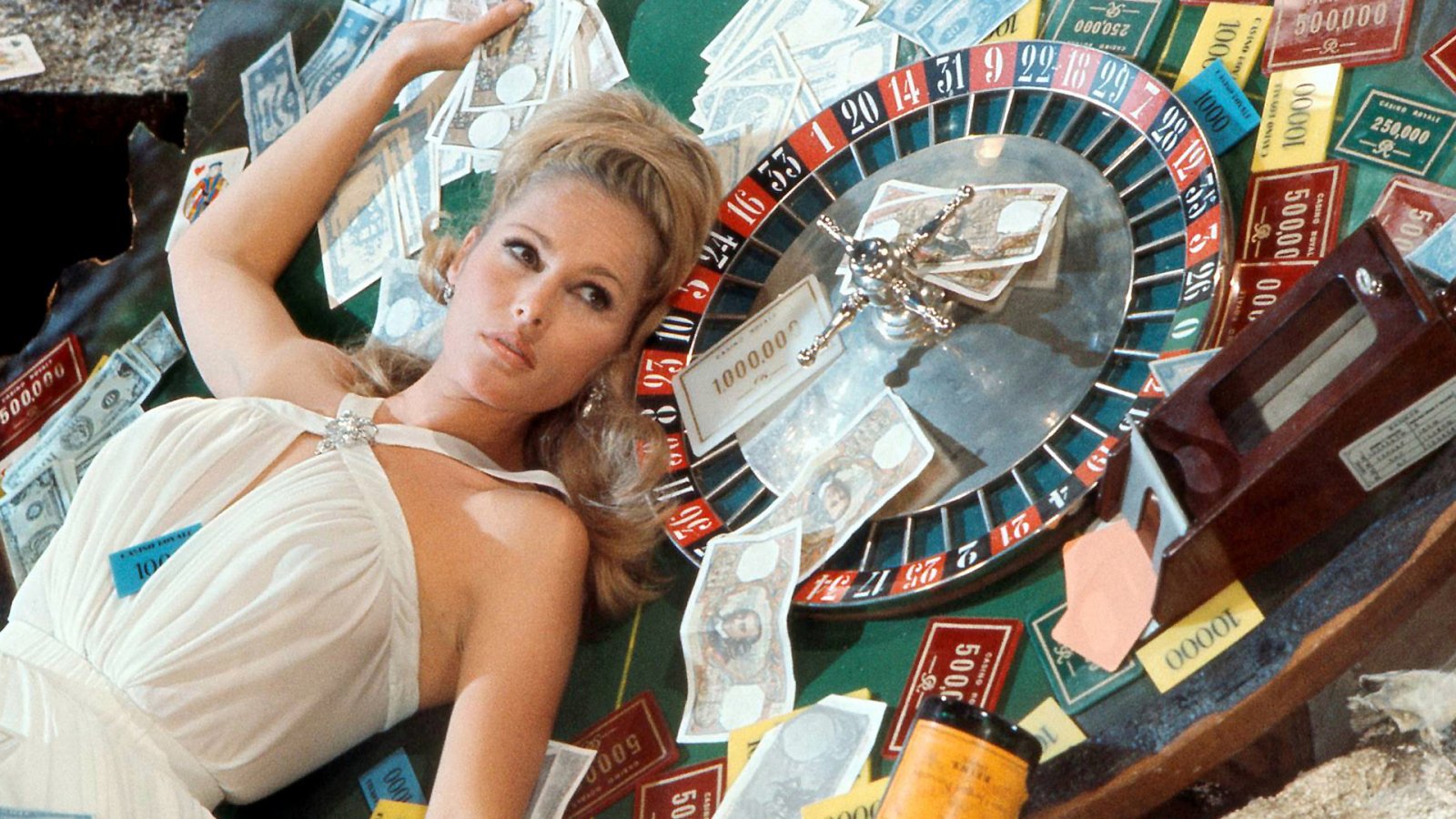 With the mad success of the James Bond films as produced by partners Albert ‘Cubby’ Broccoli and (Canadian) Harry Saltzman, which had run from 1962’s Dr. No to 1965 Thunderball, it was only natural for the Hollywood system to create a great number of other spy genre pictures. After all, like it or not, copycats make for good business, oftentimes regardless of the quality of the films themselves. Without the shadow of a doubt, the most curious imitator of them all, one that has earned, for both right and wrong reasons, a cult status throughout the decades, was the brainchild of producer Charles K. Feldman. Determined to cash in on the 007 craze, Feldman did not just make a copycat of Bond, he tried to make a Bond film, albeit one completely different in nature than the official EON Productions ones released through United Artists.

What he saw as the key to success was the rights to author Ian Fleming’s original 007 novel, Casino Royale, something that had eluded the aforementioned Broccoli and Saltzman. The other was a huge budget to spend and a choice of the industry’s brightest stars, as well as some interesting up-and-coming talents. What began as a legitimate attempt to re-create the Bond formula quickly devolved into one of movie making’s most infamous catastrophes: the 1967 spoof Casino Royale, directed by a boat load of different directors (nearly all were either fired by Feldman at one point or another or simply walked away from the project), written by multiple screenwriters, and boasting a cast of what seemed like hundreds of recognizable faces. It is nearly impossible to watch Casino Royale and not recognize at least half a dozen faces.

What is the story to Casino Royale? That is an excellent, excellent question. Just what is the story to Casino Royale?… In a nutshell: The British Secret Service is in shambles since the retirement of the real James Bond 007 (David Niven), a man far more prudish than the 007 people have come to know, which prompts MI6 leader M (John Huston) as well as the representatives of secret service agencies from the major political powers to plead that he come out of retirement. Following M’s inexplicable demise (quite literally inexplicable considering how shoddy the film’s editing is), Bond accepts to lead MI6 with new agents who shall all go under the code name James Bond 007, including Terence Cooper, Peter Sellers, and David Niven’s American nephew, little Jimmy Bond (Woody Allen). Along the way viewers meet Vesper Lynd (played by actual Bond alumni Ursula Andress from Dr. No), Ms. Moneypenny’s daughter (Barbara Bouchet), the original James Bond’s daughter, Mata Bond (Joanna Pettet) as Peter Sellers’ Bond fights Le Chiffre (Orsen Welles) at the baccarat table at Casino Royale. That’s literally only half of a-the film’s plot points and b-the cast that shows up.

So what, exactly, is wrong with Casino Royale? John Huston, Peter Sellers, Orsen Welles and David Niven are all involved in the same picture and it sucks? What is happening?!? The bluntest explanation possible is that a lot of the blame is to be aimed at the man responsible for attempting to bring all those fine artists together, Charles Feldman. Without getting into the details (books and DVD supplements will take care of that for those curious to delve deeper into the film’s production history), Feldman simply wanted to ‘have a movie made’ rather than ‘make a movie’ if that makes any lick of sense. There was no real direction because Feldman himself was quite indecisive. Ultimately, as the individual investing the money into the project, it was he who hired and fired, and did he ever hire and fire. John Huston, Val Guest, Robert Parrish, Joe McGrath and Ken Hughes all directed parts of the film, which would be fine were Casino Royale an anthology picture. Unfortunately, this is not and, as a result, the movie’s story, structure, and tone are a complete mess. A single viewing provides sufficient hints indicating that this is a project which lacks cohesion, a singular vision and a proper voice. At some points it is a psychedelic trip, other times a fancy sex (unfunny) comedy, other times the Peter Sellers imitation show and so on and so forth. True enough, there are existing films which successfully meld various styles and tones, but this is certainly not one of them. Casino Royale is the polar opposite of said movies which deftly juggle varying elements: it tries to throw everything into the mix and thus by the end feeling totally empty. As strange as the comment that follows shall read, so much happens that really nothing happens at all.

If one were to make any sort of attempt at trying to exemplify the film’s incongruities, among the vast selection of options one might take a stab at the editing for instance. More than once the story, if we are to risk calling it a story, cuts from one plot point to the next extremely jarring fashion. Early on, M and other secret service men visit the original Bond in the latter’s country home. Suddenly, as the group enjoys the famous spy’s wonderful garden, rockets are mistakenly launched onto the grounds. Cut to Niven’s Bond offering his condolences to M’s wife, now a widow. When did M actually perish? Apparently it was during the bombing, although the film never actually showed it. In fact, the last shot of John Huston has the actor trying to get a hold of his wig before it flies off, not of him wounded on the ground breathing his dying breaths. Such ludicrous editing, a constant from start to finish, is simultaneously understandable and unforgiveable. Huston simply walked off the set one day, tired of the shoot and wanting to play some high stakes poker with friends in Scotland. Directors changed every few weeks. In essence: there was no plan.

The worst part of it all is that the film, which is supposed to be a spoof, is painfully unfunny. It has been written many times before that comedy is excessively difficult to measure. What makes one giggle may bore another to death, simple as that. Be that as it may, this reviewer shan’t shy away from exposing his opinion, that being that Casino Royale is about as uninspired a comedy as can be.  Woody Allen, David Niven and Peter Sellers are comedic geniuses, yet all three were slumming it in this movie. It has been reported that Sellers in particular was experiencing genuine personal issues at the time, which explains his strenuous relations with co-stars directors (Jacqueline Bisset having an especially negative opinion of the man at the time). Nearly everyone on the set thought him to be a pompous bastard, yet credit where credit is due since he did offer apologies afterwards. Every once in a while a good line is uttered with an inkling of enthusiasm, such as the ‘Here are my credentials/They seem to be in order’ from the pre-title scene, but they are far and few between. Having the remarkably beautiful Barbara Bouchet in the film does not hurt, but even her drop dead good looks cannot save this film.

Not everything is bad, mind you. In fairness, much of the film looks good, the highlights being some inspired set designs. At times futuristic, other times appropriately exotic, with some mind-bending haunted house-style thrown in as well, the production design team deserves at least some applause. Additionally, Burt Bacharach, one of Hollywood’s most highly regarded score composers, delivers the goods even though much of the rest of the film is no good. The Look of Love is now considered a classic and many recognize the snazzy, catchy main title theme and even some of the other wonderfully playful cues that appear throughout the film. One might not want to buy the film on DVD or Blu-Ray, but purchasing the score is a sound choice.

Casino Royale is an oddity, not the least because it is an unofficial James Bond film. It is an oddity for the innumerable horror stories about its production, the fact that despite its most enviable cast nothing seems to work, and that regardless of all its issues, some of which are quite painful, it still holds a place in 007 film history (as a serious James Bond fan, even I own a copy!). How ironic is it then, as detractors of cinema’s most famous franchise often confuse one film from the next because of all the changes in actors and the fact that ‘all the stories are silly anyways’, the worst and most confusing one of them all is the very first one to have multiple actors play the role. Imitation is never as good as the real thing.