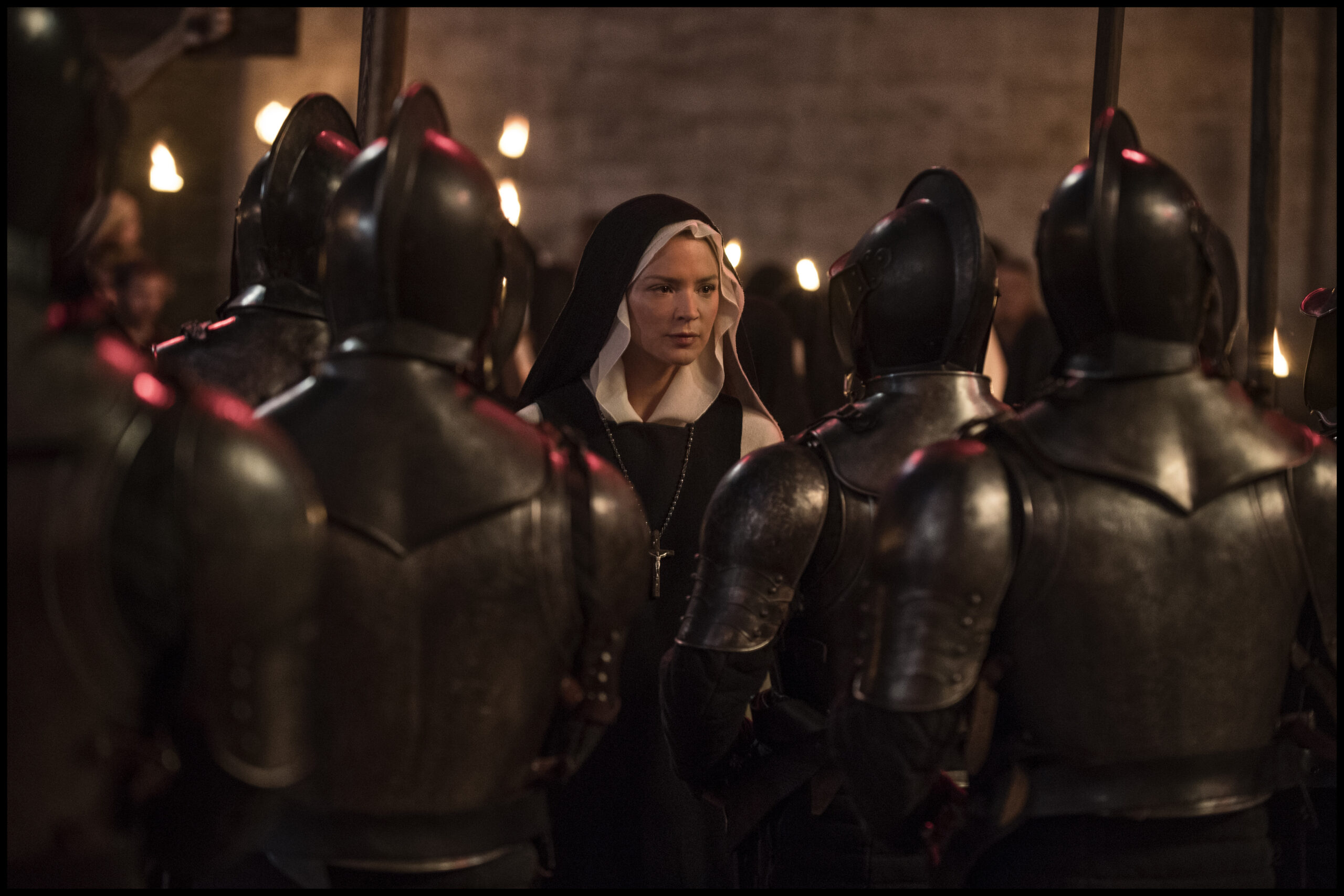 Paul Verhoeven made a movie about lesbian nuns. There are townspeople who watch a play featuring a farting demon. Jesus Christ is depicted as a sexy white knight figure. A woman casually lactates to show that she’s pregnant. There are lots of boobs and even more blood. A child’s religious effigy is used as a sex toy. Now that I have your attention, I will continue my review of Benedetta.

The provocateur director’s previous film, Elle, asked the question, “what if you got into a consensual relationship with your rapist?” With Benedetta, Verhoeven continues his female-led exploration of the taboo combining the holy trinity of religion, sexuality, and politics into his latest feature. He uses blasphemy like a butterfly knife to pierce the hypocritical doctrines of the Roman Catholic Church. The efficacy of his craft can perhaps best be distilled in the crowds it drew to its New York Film Festival premiere.

Efira has a face and presence that exudes warmth and purity. Verhoeven first put that to use in Elle, in which she also plays a religious character, and in Benedetta to present an angelic figure, glowing with God’s favor.

Benedetta first exercises her divinely imbued power on Bartolomea (Daphné Patakia), a boorish young lady who joins the convent to escape her abusive family. She is presented as a kind of “beautiful but doesn’t know it” character for Benedetta to guide. As she tries to file out Bartolomea’s rough edges, the unpolished peasant also begins to influence her. Bartolomea first steals a kiss from Benedetta and their sexual encounters grow from there.

The convent’s abbess, Felicita (Charlotte Rampling), and her daughter Christina (Louise Chevillotte) are suspicious of Benedetta. Rampling plays the role of a shrewd mercenary in a nun’s habit, running the convent like a boarding school for the privileged. When Benedetta shows signs of the stigmata, the entire town celebrates her as a messenger of god. She is elevated to abbess but Christina’s doubt mixes with her loyalty to her mother and accuses Benedetta of staging her stigmata.

One of the more interesting aspects of Verhoeven as an auteur is his ability to integrate exploitation of uncouth subjects with compelling narratives. Benedetta is the kind of lush, provocative story many HBO shows wish they could recreate. His satire is couched so deeply into genre films like Robocop and Starship Troopers that many take his work at face value.

Like in Starship Troopers, Verhoeven relishes in prodding at the hypocrisy of corrupt structures that take advantage of its faithful masses. Verhoeven and David Birke’s screenplay is full of tongue-in-cheek quips about the church and its senior members’ desire to exploit its power. The disconnect between Verhoeven and audiences may be that his characters play that irony completely straight.

When Bartolomea seeks refuge, she is told the convent is not a place of charity. “Miracles sprout like mushrooms,” is the brushed-off response to possible acts of an almighty being. Religion was the law of the day and an institution in which intelligence was dangerous. In Benedetta’s dreams, Jesus is portrayed as a hunky action hero, and she, his damsel in distress as he slays snakes with his mighty sword. Verhoeven takes the grand perception that Jesus is an all-powerful savior and translates him into a Chris Hemsworth character.

Early in the film, Benedetta is told her body is her worst enemy and that it’s best not to feel home to it. Verhoeven uses hyper-sexualized elements to point out the way in which the church believes the body and pleasure to be dirty and shameful constructs of mortals rather than a deity’s creation that should be celebrated and indulged. It’s suffering that is believed to be the way to celebrate god, which he portrays as sadism.

As absurd and over-the-top as the story may sound, much of it is based on Judith C. Brown’s book Immodest Acts: The Life of a Lesbian Nun in Renaissance Italy, an account of the real-life Benedetta. Verhoeven’s adaptation explores how much of the church’s dogma is performative. The ceremony, outfits, and elaborate buildings create an imposing, albeit superficial, façade they use to construct an infallible credence. Benedetta’s supernatural experiences challenge the faith of the powerful and expose them as frauds and non-believers. The beautiful irony is that Benedetta herself is a fraud but, like the church, believes to be enacting God’s will and will do whatever it takes to prove it. She is both deluded and divine.

Le Nonce (Lambert Wilson), a papal ambassador, along with Felicita are characters who help perpetuate the trappings of the Roman Catholic Church and reap its benefits. Their orders are given and taken as an extension of the divine. They are self-interested and are fearful of Benedetta’s growing influence which they cannot control. Faith is depicted as something the desperate look to and the powerful exploit.

Verhoeven takes every opportunity to insert what is perceived to be crass by standards that were set long ago by church rule. He plays with the audience’s notions that sex and the body are dirty and unholy. Under the tons of instigation and pulp is a propulsive story with intrigue and ambiguity that will make for hours of discussion. He’s hit his late-career stride and is creating at the top of his game.