Before the release of Bryan Singer’s Bohemian Rhapsody, the biggest concern was that the film would elide Freddie Mercury’s sexuality in favor of straight-washed fantasy. Those concerns were overblown; the final film is quite explicit about Mercury’s sexual orientation (though it may still have failed in a different, less obvious way — Mercury had relationships with women and men throughout his life, suggesting that bisexuality might have better described him). The sin that Bohemian Rhapsody does commit is one of a lack of imagination. Bryan Singer directs this story with about as much flair as the anonymous creator of a basic cable biopic. It’s astonishing that Bohemian Rhapsody will play on giant screens when its story is so diminutive as to fit perfectly on the small ones, and seeing it in a theater threatens to dilute what little style and substance the film has.

Regardless of how high-minded one might hope to be, the first thing most viewers will notice is the teeth. When we see Rami Malek (excellent on Mr. Robot), he’s trying his hardest (and failing) to hide his gargantuan chompers. The teeth — particularly the incisors in front — strain credulity with their mammoth size, to the point that Malek can’t even close his mouth without them poking out. They’re also a grotesque parody of Mercury’s own infamous teeth; countless photographs exist of Mercury, an unending stream of evidence that Bohemian Rhapsody misjudged its prosthetic. It’s a small, seemingly unimportant detail, but it reveals the utter lack of care or detail, and unfortunately, most of the film is just as slipshod as its character design.

Malek is regardless the best thing about the film, and most of the time he’s quite good. The resemblance is uncanny, especially once he grows out Mercury’s ‘80s mustache. The accent falters here and there, and it’s impeded by those ridiculous teeth, but Malek’s physicality perfectly mirrors Mercury’s, especially in the stirring Live Aid sequence that concludes the film. 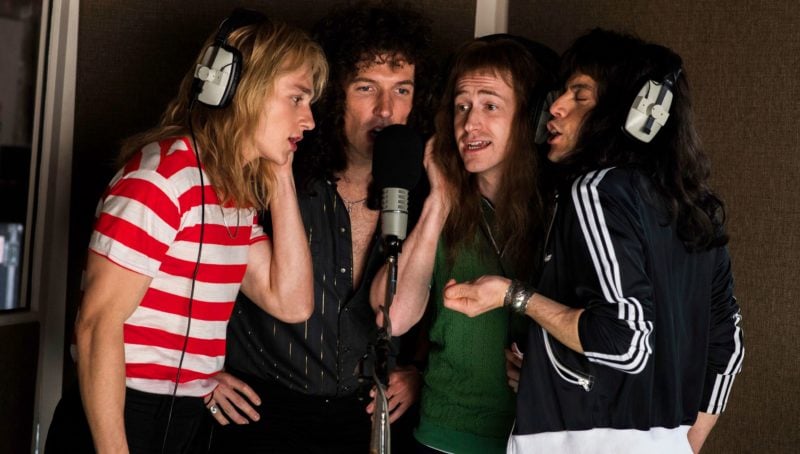 Though Bohemian Rhapsody is essentially a character portrait of Mercury, we learn precious little about his life prior to joining Queen. There’s not much about his family, about how his outsized personality might have conflicted with his conservative Indian parents. Instead, we get little platitudes from his father that are meant to impart some kind of wisdom. Likewise, we know little about his professional or musical life prior to joining the band. There’s a brief scene showing him working as an airport baggage handler, but that’s it. We never learn where his musical gifts came from, which makes them seem like a miracle rather than something he would have honed and worked on obsessively for years.

Even when Mercury joins the band, he’s presented as a hanger-on, a groupie of sorts who falls in love with the group that would become Queen once he changes the name. The after-concert sequence in which he introduces himself is laughable in how pat it is — a cinematic shortcut that belies just how lazy Singer and screenwriter Anthony McCarten are.

That laziness pervades. Once Queen’s fame has been assured, the film launches into a montage of anonymous performances in which Malek’s Mercury dances and sings in an excellent approximation of the real thing, but the backdrops are strikingly generic. Location names flash across the screen, but some are merely regions of the US, not even specific cities; it’s as if none of these concerts even matter. Singer, never a great visual stylist, fails to ever find a compelling image. Malek himself can occasionally be electric enough to draw one’s attention, but Singer’s visual prowess is too weak to create any memorable images out of the performance. 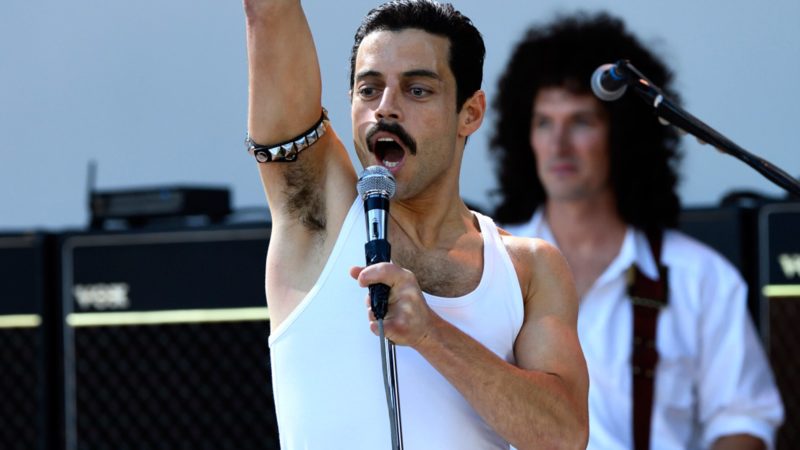 The long and tortured road to creating Bohemian Rhapsody reveals some of the reasons for the film’s glancing interest in Mercury. The surviving members of the band all consulted and had script approval. In an early version of the production, Stephen Frears was to direct, while comedian Sacha Baron Cohen was to play Mercury, but interference from the band members drove Cohen from the project. It’s not that surprising that the remaining members (who each wrote some of the band’s most iconic songs) might be miffed at the way Mercury’s celebrity has come to define the act.

The film as it exists almost plays as a kind of revenge against the dead singer. We see plenty of Mercury’s gayness, but it’s only the sensational stuff; his sexual peccadillos are well covered, but less covered is how his sexuality may have influenced the band’s music. Mercury was able to successfully disguise gay culture and art in his work to the point that it was palatable to even the most hardened meatheads, but Bohemian Rhapsody is oblivious to that.

It’s concerning that the film views Mercury’s sexuality only through the most tawdry and scandalizing lenses. Perhaps that’s a reflection of Singer’s own views on sexuality; the director has become notorious in recent years for his proclivities for young men, and has been accused of sexual assault by multiple people. It’s impossible to watch the scene in which Mercury meets his future partner without thinking of Singer’s own history, as Mercury harasses and assaults the man while the film plays it off as some kind of fateful romantic encounter. Perhaps Singer and McCarten didn’t realize the significance of the scene, or how it would play in the #MeToo era, but it does immense harm to their story.

It’s tempting to assign blame for Bohemian Rhapsody’s failure on a single person. Perhaps Singer, or the film’s screenwriter, or the surviving band members who strangled more interesting versions of the movie, each could take the lion’s share. But, of course, the blame belongs to all of them. The only thing worse than a film made by committee is a film destroyed by committee.

The Filmstruck Cram — Day 5: ‘Simon of the Desert’