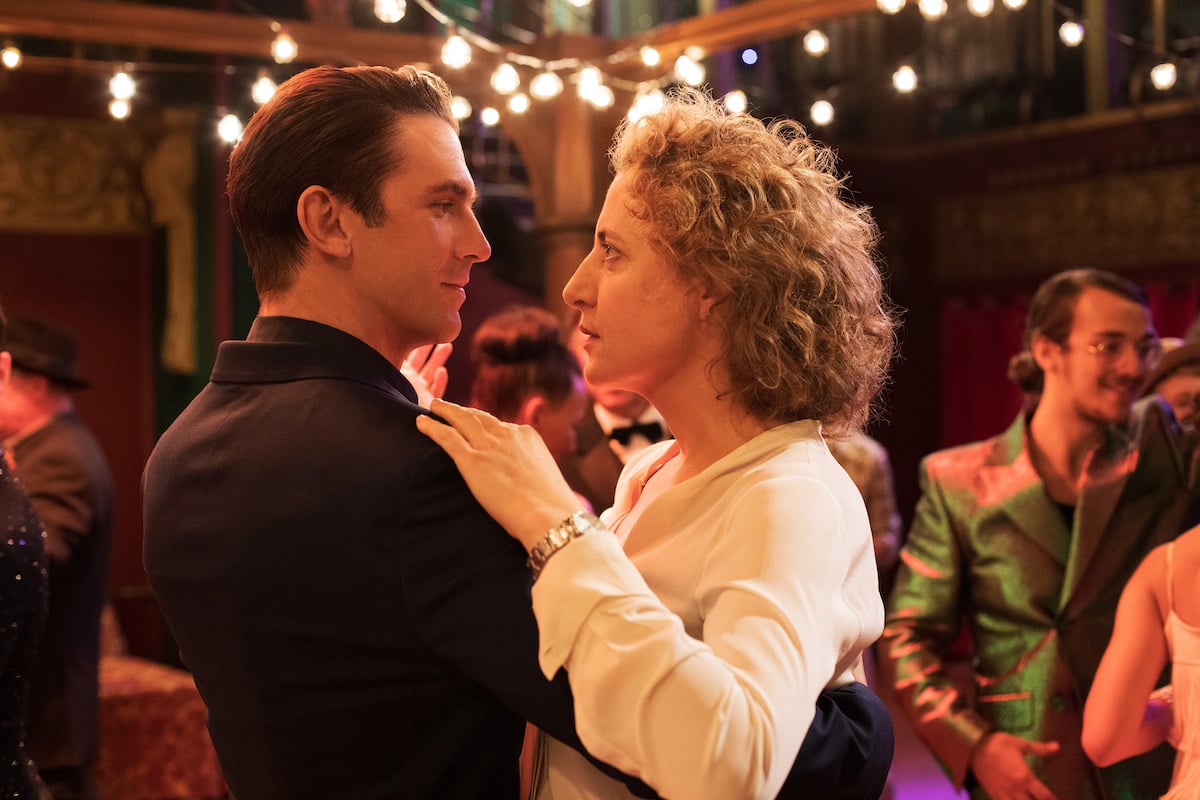 Dan Stevens is so handsome he comes across as mildly alarming. He weaponised it to great, creepy effect in The Guest; now he uses it to cross the uncanny valley in I’m Your Man, the latest feature from Unorthodox’s Maria Schrader. Set again in Berlin, he’s brilliant as a romantically-programmed robot that can expertly mimic the perfect soulmate.

He plays Tom, an artificially-created being that rattles off Rilke, complex mathematical sums and corny pick up lines — comparing a potential lover’s eyes to mountain lakes — with ease. It is this very quality that deeply unnerves Alma (Maren Eggert), a researcher who who agreed to write an evaluation of his suitability in order to gain funding for her work on ancient runes.

The German title of I’m Your Man translates to Ich bin dein Mensch, a word that also means a man but carries far wider connotations of someone of good standing and ethical capabilities. Alma isn’t sure he’s much of a mensch, considering the way he is controlled completely by constantly-updating algorithms perfectly designed to complement her wishes and desires. She is immediately put off by his odd demeanour, market-researched gestures — such as a rose-filled bubble bath that he tells her 93% of German women enjoy — and slight British accent, reflecting Dan Steven’s own nationality and adding to his uncanny strangeness.

While Stevens provides a masterclass that would slot in nicely in any episode of Black Mirror, the surrounding film also suggests creation by algorithm. The central question prevails regarding whether human emotion and difficulty can be simulated — with the spiky, semi-depressive Alma butting heads against a man that provides the right word and gesture for any occasion — yet lacks the kind of humanity, seen through the fascinating cultural dynamic in Unorthodox, to provide the kind of poetry than a robot cannot.

Made with a good heart and a strong eye for comedy, it falters when it comes to Alma’s tragic backstory and fractured relationship with her family and ex-boyfriend. This isn’t helped by the flat scene-development that barely simulates the gestures needed to sustain genuine character development. By the end, it’s all to easy to predict how the film will develop — taking the basic contours of a romantic comedy and refracting them through a science-fiction premise. One wonders the kind of oddball charm or philosophical inquiry that could’ve been developed with a more inquisitive eye.

Romantic comedies flourish by their location, almost doing as much heavy lifting as the characters, but I’m Your Man seems to have picked its locales via stock photo search. Real Berliners would never hang around Alexanderplatz, possibly the most soulless, police-heavy place you could find in the entire city. Coupled with a middle-section that plods around the same few themes with indeterminate indecision, I’m Your Man sadly fails as both science-fiction and romantic comedy. At least it stands as proof that Dan Stevens, working well in a second language, can make the leap to international film. He’s so compelling, he makes the rest of the film almost worthwhile.

I’m Your Man plays in Competition at the Berlin Film Festival, running digitally from 1st to 5th March.

Berlinale 2021: Mr. Bachmann and His Class is The Most Fun You’ll Ever Have at School

Biggie: I Got a Story to Tell Revisits the Familiar