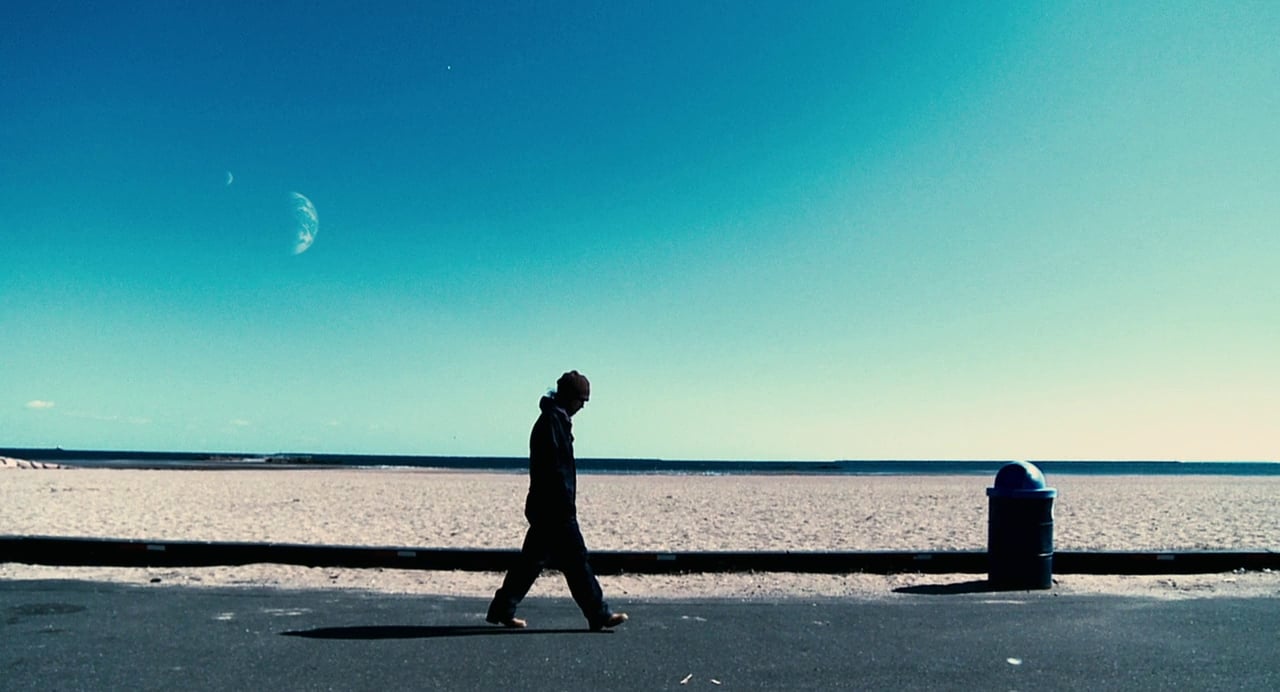 From the very outset, speculative fiction has been first and foremost a vehicle for probing resonant themes through outlandish concepts that bend the contours of everyday life. So it’s hardly unusual that Mike Cahill’s first feature, Another Earth, attempts to essay grief, personal responsibility, and the quiet agony of the path not taken through the metaphorical prism of a dual Earth’s sudden, plainly visible appearance not far from our own. What grates about the film are not its attempt to conflate high-concept sci-fi with quiet dramatics; it’s that only one half of that equation is fleshed out in a remotely interesting fashion.

Newcomer and co-screenwriter Brit Marling stars as Rhoda, who we first see in the film’s prologue as a reckless 17-year-old celebrating after her acceptance into MIT. She gets drunk behind the wheel, and – distracted by the aforementioned new planet’s blue glow in the night sky – she crashes into the minivan of local composer John (William Mapother), killing his family and placing him in a coma. Four years later, Rhoda leaves jail a shell of her former self. Depressed and shiftless, she takes a cleaning job at a local high school before ultimately deciding to find and apologize to John,  ultimately chickening out and offering to clean his house instead. All the while, “Earth-2” looms, and with it the promise of another chance in the form of a worldwide contest with the prize of a seat on the first shuttle to the new planet.

In one of the film’s rare lapses into self-awareness, Rhoda runs into a former friend, who remarks that her cleaning job must be “therapeutic.” It’s meant to be an insensitive remark, but it actually cuts to the heart of Another Earth‘s entirely superficial character studies. Anyone who has hurt someone else – which should extend to just about everyone – should immediately recognize that Rhoda’s actions are entirely self-serving, but it’s not until very late in the film, around her sixth or seventh boneheaded insinuation into John’s life, that she finally comes to the realization herself. (By the way: if she really intended to apologize on her second visit to John’s house, why arrive prepared to clean?) A clueless or hurtful protagonist is not in itself necessarily a fault, but the film frames her character so sympathetically that we never get the impression that Marling and Cahill sense just how counterproductive every one of her actions are – an impression that’s most strongly reinforced by Rhoda’s final act of “sacrifice,” which winds up as gratefully accepted.

Despite the lofty sci-fi concepts that pervade the movie, the concept most beloved by Cahill seems to be Iñárritu-ian cause and effect. Post-crash, both Rhoda and John emerge – after four full years –as grimy, identically dressed sad-sacks whose shared misery the film couldn’t possibly underline less delicately. The outrageous set of coincidences that require the John-and-Rhoda scenes to function are explained away in one convenient, graceless piece of dialogue late in the film. Actually, gracelessness might be the film’s main connecting thread – from a potentially riveting scene trampled on by a sentimental scoring choice (Rhoda’s story of the Russian cosmonaut), to the striking final shot, which briefly stuns until the realization sets in that the conclusion is incredibly improbable by the film’s own logic. The film’s most offensive lapse into wrongheaded concepts, though, is the character of Purdeep, played by Kumar Pallana. Rhoda’s deaf, elderly Indian co-worker at the high school, he reassures Rhoda through non-sequitur bouts of wisdom, and turns out to have his own elaborately tragic history, clunkily laid out by an ancillary character. Their last scene together is unintentionally hilarious in its hyper-clichéd evocation of shared trauma.

Despite the gorgeous, multi-faceted cinematography and the palpably atmospheric feel – with the alternate Earth casting an appropriately blue pall – Another Earth winds up as run-of-the-mill Sundance fare gussied up as a thinking man’s genre movie. That it proves to be almost totally incurious about the potentially fascinating issues it raises except as they relate to the inner lives of its tiresome characters is symptomatic of the film’s generally half-baked execution.

Underwater Love— a musical with heart, and other organs