Chicken Run, Aardman Animation’s 2000 classic, is the highest grossing stop-motion animated film ever. This is unsurprising given its genius: family friendly fun that’s subtly intertwined with the brutality of animal exploitation. The plot centres on a cast of chickens held captive on Mr. and Mrs. Tweedy’s farm, as they try to escape a hell where they fear for their lives. With metaphor mania, capitalistic moral bankruptcy, and an antagonist more repulsive than Katie Hopkins with a magic wand that gives people cancer, Chicken Run is a vegetarian/vegan gem that serves up subtle arguments to back animal liberation.

The story kicks off with protagonist hen Ginger attempting escape, only to be thwarted by Mr. Tweedy, the bumbling brute co-owner of Tweedy’s farm, and his guard dogs. But Mr. Tweedy’s unlikeability pales in comparison to his Satan spawn wife, Mrs. Tweedy. A bona-fide B to the I to the T C H, her disdain for chickens knows no bounds. 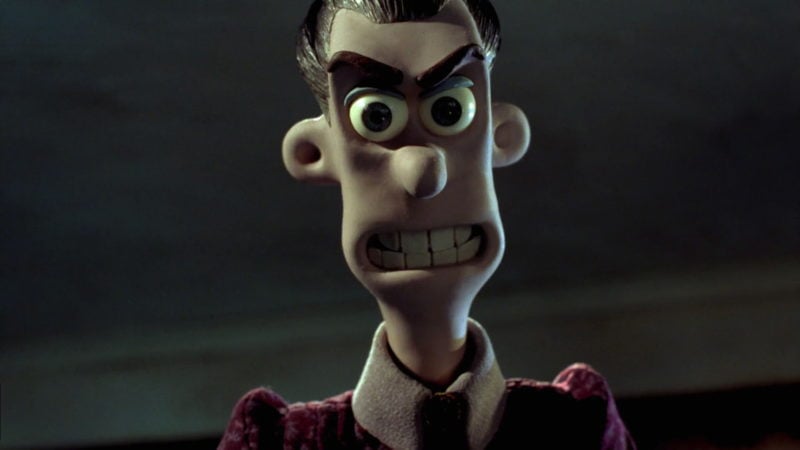 For example, an early scene in Chicken Run sees one unfortunate hen called Edwina fail to lay eggs, so Mrs. Tweedy takes the terrified soul to a room and decapitates her. Later inspecting her dwindling finances, she bellows in rage “Stupid worthless creatures. I’m sick and tired of making minuscule profits.” This encapsulates her perception of chickens: wretched animals only useful for monetary gain via vile exploitation. In actuality, Chicken Run shows them as living, breathing, thinking, feeling beings. 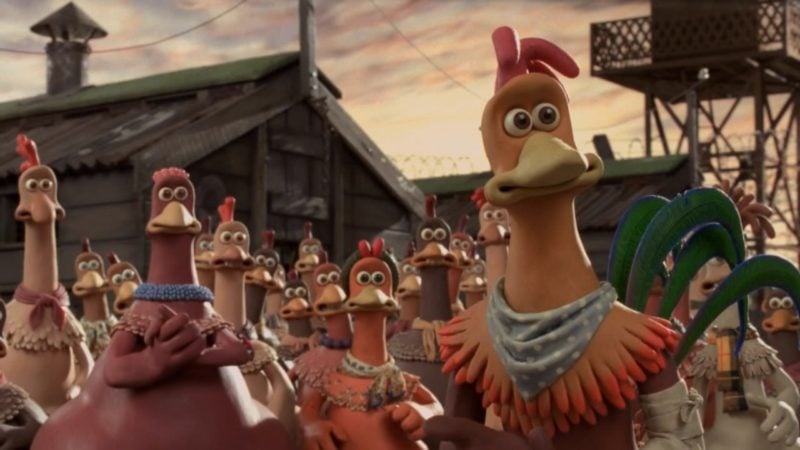 Later, there’s an advert for Mrs. Tweedy’s Homemade Chicken Pies; flaunting a sunshine smile, the woman herself holds aloft a pie with a cartoon chicken peeping out. Of course, Mrs. Tweedy’s public image is a sham, and the tag-line “It’s the WOMAN’S touch!” lulls consumers into a false sense of security. “I’m sure that quaint Mrs. Tweedy gal treats her chickens with love…” No, she’s bad to the bone, and you’ve been suckered! 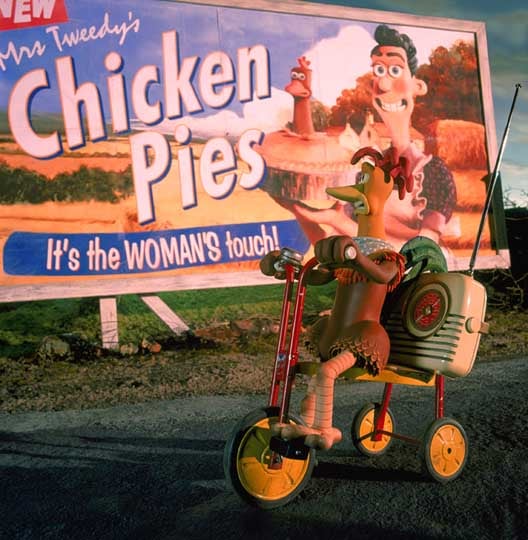 Just like how meat and dairy is advertised in real life — like milk marketed in a sparkling glass, its white milky milkiness against a cool blue background, or meat advertised using masculinity — Chicken Run‘s cute facade hides the gore behind the scenes. The film satirizes propaganda via Mrs. Tweedy’s malevolent marketing. Similar lies litter Rocky the Rooster’s circus poster. His ear-to-ear grin as he’s fired from a cannon is a far cry from the truth; Rocky hates the circus that makes him endure captivity and dangerous stunts for the entertainment of selfish consumers.

Beside Mrs. Tweedy stands her hopeless dope of a husband; Mr. Tweedy isn’t just a comical counter to his other half — he’s a metaphor for slaughterhouse workers. In Ozzy Osbourne’s 2010 autobiography, I Am Ozzy, he divulges his stint in a slaughterhouse. “The guys would f*** around with the pigs sometimes, commit all sorts of atrocities. It was like Auschwitz in that place on a bad day, the evil that went on. Sometimes the pigs would get dropped into a vat of boiling water before they’d even been knocked out. Or they’d still be awake when they were put through a furnace that burned all the hair off their backs. I regret a lot of that stuff now.” Low pay, low morale, and killing animals daily might lead slaughterhouse workers to crack and make their own entertainment. 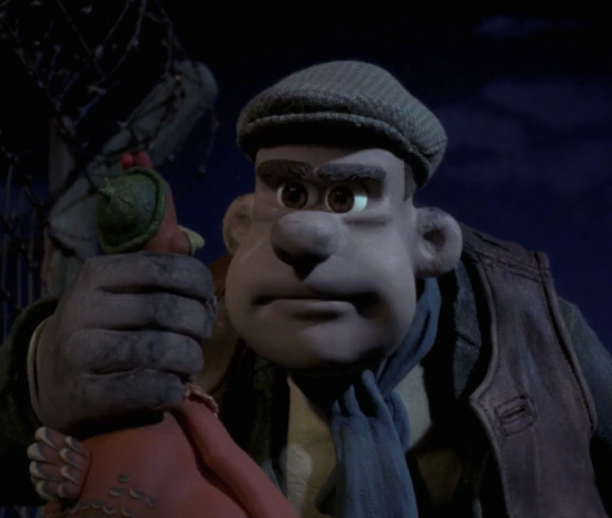 Mr. Tweedy bullying Ginger with solitary confinement shares principal to slaughterhouse workers torturing animals. Said torture is a result of boredom, a selfish disconnect from life other than one’s own, and most prevalent, a yearning for control. For Mr. Tweedy, the errand boy of his slave-driver wife, the control he has over his chickens is the only freedom he gets. Hence, he takes advantage of it.

Similarly, when slaughterhouse workers who scrape by on minimum wage as their optimism trudges the trenches of rock bottom are allowed to play God with animals, what do you think they’ll do? Chicken Run explores this metaphorically through Mr. Tweedy.

Speaking of metaphors, Chicken Run‘s most obvious example is Tweedy’s farm’s similarities to prisons, which take form in a blatant sendoff of 1963’s The Great Escape. From barbed wire lining the perimeter to the aforementioned solitary confinement, Ginger and friends are inmates walking on eggshells (pardon the pun). The grim truth is that Tweedy’s farm is better than most chicken farms. After all, Chicken Run wouldn’t be as entertaining if Ginger and pals lived in industry standard conditions, enduring their lives in mucky cages too tiny to move in, self harming by removing their feathers, and being maimed by debeaking (which is a bit like having your nose cut off without anaesthetic). 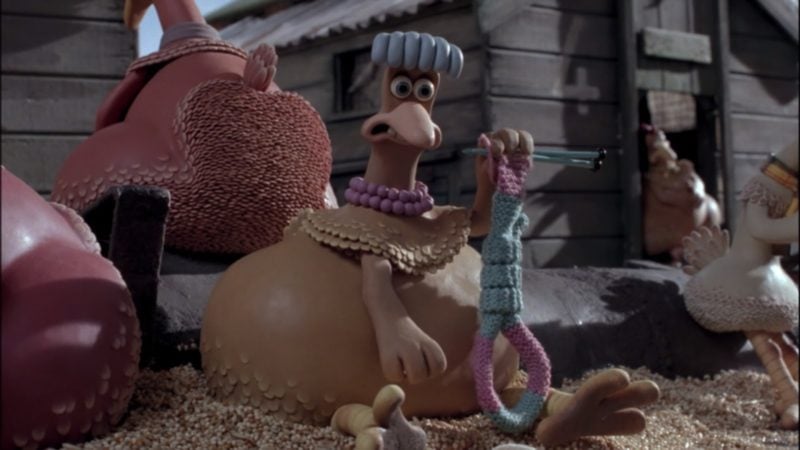 A funny joke, or commentary on real life chickens self harming due to depression?

One of the best vegetarian/vegan films ever, Chicken Run avoids lecturing like Carnage and Earthlings (both of which are awesome by the way), and instead bundles its message with wide-eyed entertainment, like Babe and Okja.

The rallying call for animal liberation these latter films make ignites a journey that begins, however, with wisecracking stop-motion chickens in Chicken Run.