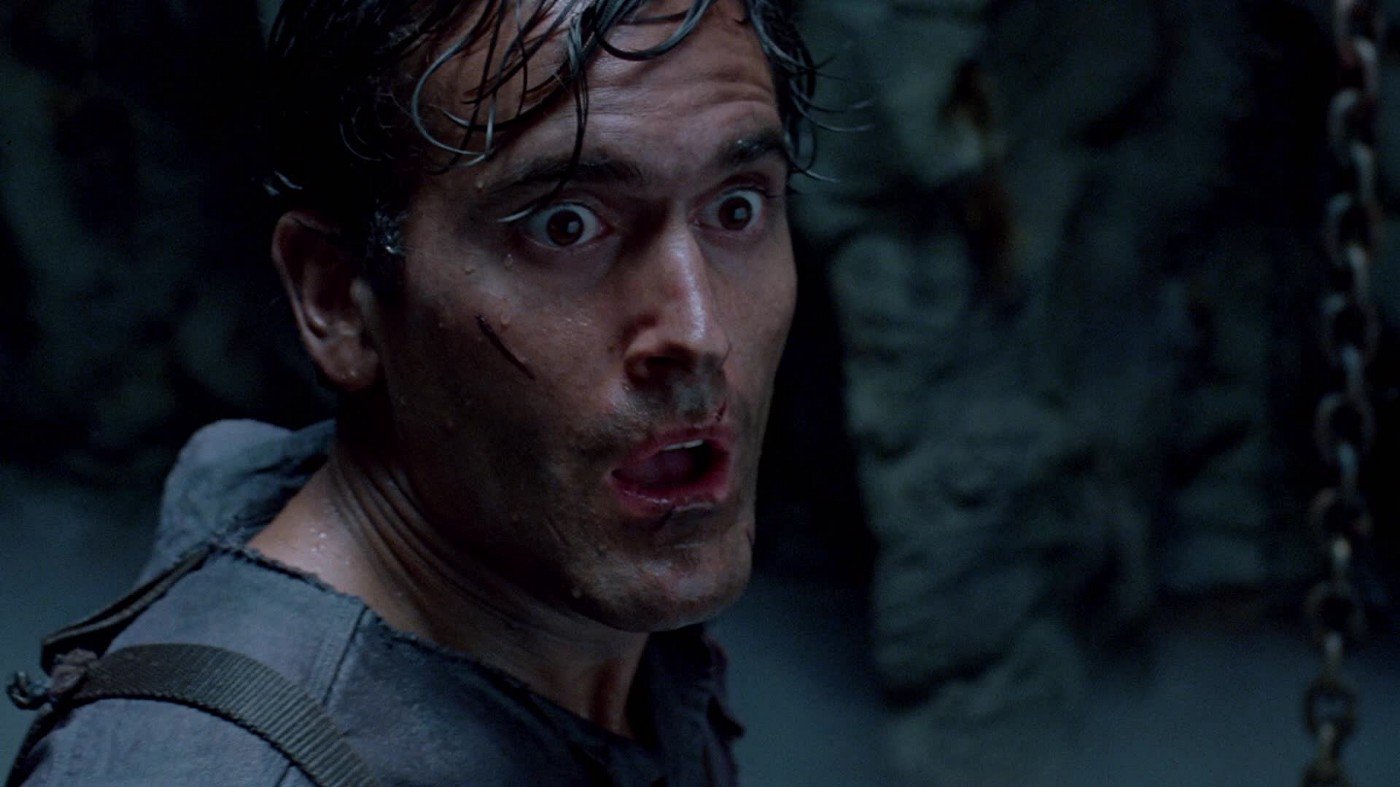 Alright, you primitive screwheads, listen up! It’s been twenty-five years since Bruce Campbell first showed the Army of Darkness his “boomstick,” and pop culture hasn’t been the same since. For anyone unfamiliar, Army of Darkness is the classic tale of a boy and his chainsaw being forced to fight the undead in medieval England. It’s a Sam Raimi-penned love letter to the Three Stooges and Ray Harryhausen, chock-full of stop-motion skeletons, eye gouges, and pratfalls. When it comes down to it, there’s only one word to describe Army of Darkness: groovy.

But that’s just what we call pillow talk, baby. The truth is that Army of Darkness is an underrated gem that often gets overshadowed by its gorier, creepier predecessors. While It’s true that this third entry in the Evil Dead series isn’t as scary as Raimi’s previous horror outings, it’s also not trying to be. Though often categorized as a horror-comedy by default, Army of Darkness is more of a comedy with some horror elements thrown in. Think of it as a modern-day Abbott and Costello Meet Frankenstein — just with more chainsaws and body horror.

The lack of actual horror in Army of Darkness has led some gorehounds to express disappointment with the film, feeling that Sam Raimi should have stuck with tree rape and exsanguination oversight gags and puns. Those people are wrong. In the six years between Evil Dead 2 and Army of Darkness, Peter Jackson released the definitive splatstick film with Dead Alive, taking the carnage of Evil Dead 2 and turning it up to eleven. Jackson’s tour de gore features grotesqueries such as a priest mowing down zombies with a lawnmower and oozing pustules of orange gunk bursting above bowls of custard before being consumed by oblivious dinner guests. Any effort by Raimi to outdo Jackson’s ode to evisceration would have fallen flat, and clearly, Raimi had no desire to do so anyway.

Instead, Raimi took the Evil Dead series in another direction. By trading the splatstick of Evil Dead 2 for plain old slapstick, Sam Raimi made a swashbuckling comedy that pays homage to all of his childhood influences while still maintaining the usual Raimi quirks. Army of Darkness might be the least gory of all the Dead films — even with a literal geyser of blood in one scene — but it more than makes up for that by being both the funniest entry in the series and the one that has had the biggest impact on pop-culture. Both of these things can be attributed to the film’s protagonist and the man who played him.

Bruce Campbell created a horror movie legend with the character of Ash, one that has influenced countless flawed protagonists over the last two-and-a-half decades, ranging from subtle homages (Shaun of the Dead) to blatant rip-offs (Duke Nukem). Ash might be a smarmy douche, but he’s a smarmy douche who’s always ready to spank evil with his chainsaw hand and a sawed-off shotgun.

Now, I can already picture some pedantic horror fan (not that there’s anything wrong with being a pedantic horror fan — ask me about my beef with brain-eating zombies sometime) rushing to be the first one in the comments to point out that the Ash in Army of Darkness is just the Ash from Evil Dead 1 & 2, but I’ve got some news. You ain’t pointing out, but two things right now: Jack and s**t, and Jack just left town.

While it’s true that Army of Darkness isn’t Ash’s first physical appearance on screen, it is the first time his character is defined as the Ash we all know and love. The Ash in Evil Dead isn’t so much a character as he is a punching bag for everything the Necronomicon (and Sam Raimi) can throw at him. By Evil Dead 2, he’s been reduced to a stark raving lunatic driven mad by the death and resurrection of his friends and his subsequent possession by an evil entity. It’s not until Army of Darkness that Ashley J. Williams becomes the archetype for a certain kind of protagonist — the inept jerk that gets yanked from their humdrum life into some manner of supernatural tomfoolery, going from jackass to badass in the process (all the while maintaining some if not all of their bad manners).

The list of movies featuring brash losers who appear to be either loosely or directly inspired by Ash is longer than you would think. Both the aforementioned Shaun of the Dead and its American counterpart Zombieland have Ash-like characters, as well as pretty much every other zombie movie that has come out since 1993. If a show or movie features an average Joe (or Josephine) suddenly thrown into a world of occult horrors, there’s a good chance the character will have at least a passing resemblance to Ash from housewares.

The long, chainsaw-equipped arm of the chosen one has also touched the medium of television. You can feel the spirit of Ash in shows like Reaper, Todd and the Book of Pure Evil, and Supernatural. Ash himself made the jump to television a few years ago, and even though the title of the series is Ash VS The Evil Dead, the show — or at least its characterization of Ash — owes more to Army of Darkness than anything else.

Who’s next, huh? You, Video Games? You want a little? HUH? Aside from the aforementioned Duke Nukem, Lollipop Chainsaw was also heavily influenced by Ash, along with practically every survival horror game and FPS in existence. You can’t throw a rock in GameStop without hitting a game where someone either spouts Ash-like one-liners, carries a shotgun, or wields a chainsaw — sometimes all three.

If all of that isn’t enough to convince you that Army of Darkness is a big deal, then your primitive intellect also probably wouldn’t understand alloys and compositions and things with molecular structures…

Look, all of the imitators and homages that Army of Darkness has spawned aren’t what makes the film great, but they are a testament to its greatness. Whether you watch the theatrical or director’s cut, Army of Darkness is pure fun and has only gotten better with age. In the two-and-a-half decades since its release, there hasn’t been another movie quite like it, and there probably never will be. Sure, there have been horror comedies since 1993, but none with the quotability of Army of Darkness, and certainly none that even begin to approach Sam Raimi’s gonzo visual style or penchant for vaudeville-style physical gags. And yeah, there have been plenty of Ash copycats over the years, lovable a-holes adept at dispatching demons and other nasties with a quip and a smirk, but none of them are as memorable as the Ashley J. Williams. In his own way he’s the king… Hail to the king baby!

‘Grass’ is Hangout Cinema at its Best