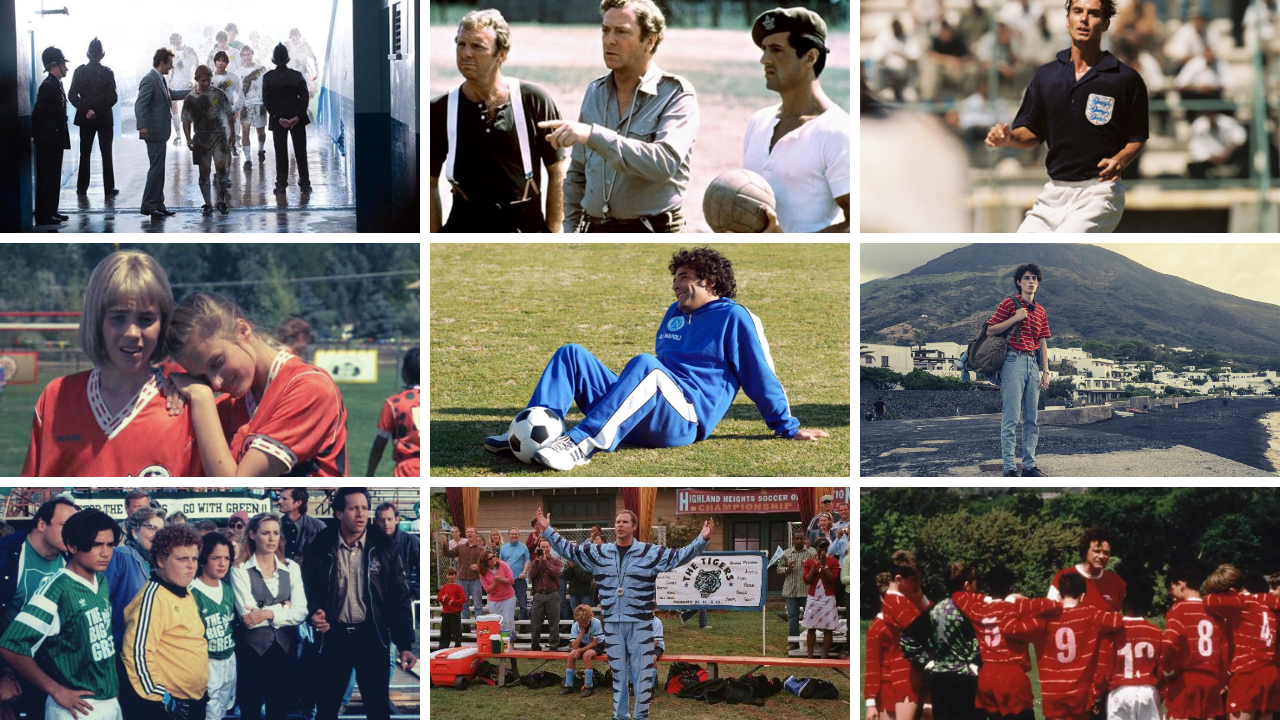 What are the best movies about soccer?

It’s FIFA World Cup time, and as is often the case with the World Cup, a lot of people will be discovering soccer for the first time. Like most sports, it’s been the topic of lots of movies, including many documentaries about the history of the sport.

But there have also been some notable feature films about the Beautiful Game as well. Here are some of them. (Note: I’ll be using “soccer” to describe the sport, even though many of these films are set in countries where the game is known as “football” or “futbol.”)

Gurinder Chadha’s film, which turned 20 years old this year, was The Jazz Singer, except set in the British Indian Sikh community in London. It starred Parminder Nagra as a soccer-mad teenager, obsessed with David Beckham, who is caught between the sport and the wishes of her traditional family. A very young Keira Knightley played her friend and teammate. It’s a crowd-pleasing story, one that found success on both sides of the Atlantic, and like most films of its kind, it found a happy ending.

Filmmakers are called daring for lots of reasons, but few are more daring than Iran’s Jafar Panahi, who has labored for more than 15 years under threat of arrest in his native country. Offside was about a girl who disguises herself as a boy to attend a World Cup qualifying soccer match in Iran, where women are not allowed to attend sporting events; Panahi filmed during the actual match.

Leeds United just returned to the English Premier League last year after a long absence, and many American fans have adopted them as their club since it has several American players. It turns out there’s a fantastic movie about Leeds’ history, and specifically manager Brian Clough’s brief, 44-day tenure as manager of the club in 1974. The film starred Michael Sheen and was written by The Crown‘s Peter Morgan.

No, not the Red Sox movie with Jimmy Fallon and Drew Barrymore, although it was derived from the same book by Nick Hornby. The first one, which starred a very young Colin Firth, was more of a direct adaptation, about a young man who’s an obsessed fan of Arsenal, and how it negatively affects his romantic life. This is, needless to say, a much better movie than the baseball version, although both ended with the team winning the championship.

Soccer hooliganism, at least in England, isn’t what it once was, but it got a cinematic examination in 2005, directed by Lexi Alexander and starring Charlie Hunnam and Elijah Wood as a couple of friends in West Ham’s hooligan firm. There’s never been a movie adaptation of the best book about hooliganism, Bill Buford’s “Among the Thugs,” so this will do.

The U.S. and England are set to play each other in group play in the World Cup this year, and there’s also a movie about another time that they played. In 1950, the U.S. also beat England in the World Cup, in Brazil. The film stars Gerard Butler, Wes Bentley and Gavin Rossdale.

Gerard Butler, a few years later, starred in another soccer film, this one a romantic comedy in which he played a Scottish ex-player. The film, something of a box office flop, features a perhaps overqualified supporting cast of Catherine Zeta-Jones, Uma Thurman, and Judy Greer.

Israel’s 1982 invasion of Lebanon happened to take place during the World Cup that year, and this fictional Israeli film tells the story of an Israeli soldier taken prisoner who actually bonds with his captors over their mutual love of the game. It’s not exactly the deep, soul-searching examination of that war that, say, Waltz With Bashir was, but still a testament to the power of the sport.

Paolo Sorrentino’s autobiographical epic wasn’t really about soccer, although it did touch on the young protagonist’s love for the Argentinian soccer superstar Diego Maradona, who famously scored the “hand of god” goal in the 1986 World Cup, and takes its name from that. This film is not to be confused with.

This one is a full-on biopic of Maradona, an Italian/Argentinian film that starred various actors as Maradona at different ages.

A very different kind of soccer film, this Hong Kong film starred Stephen Chow, who also directed, and featured the combination of Shaolin kung fu and the game of soccer.  It’s firmly, though, in the underdog sports tradition.

Soccer wasn’t as popular in the 1990s and early 2000s as it is today, but Hollywood for some reason couldn’t stop making soccer comedies, which weren’t that great. Ladybugs, in 1992, was a star vehicle for Rodney Dangerfield that won’t make anyone forget Caddyshack or Back to School. The Big Green was a culture clash comedy, something of a reverse Ted Lasso in which a British teacher coaches an American soccer team. And Kicking and Screaming, starring Will Ferrell as a soccer coach clashing with his father (Robert Duvall), isn’t even the best movie from that time period to be called Kicking and Screaming. But none of them is the worst soccer film ever- that title goes to…

FIFA, soccer’s world governing body, has a well-earned reputation as nothing less than one of the most corrupt organizations on Earth. United Passions arrived in 2014 as a propaganda film on behalf of FIFA, and especially its leader Sepp Blatter (played by Tim Roth) who was finally forced out of the organization in a scandal the following year. It retains, to this day, a zero percent rating on Rotten Tomatoes.