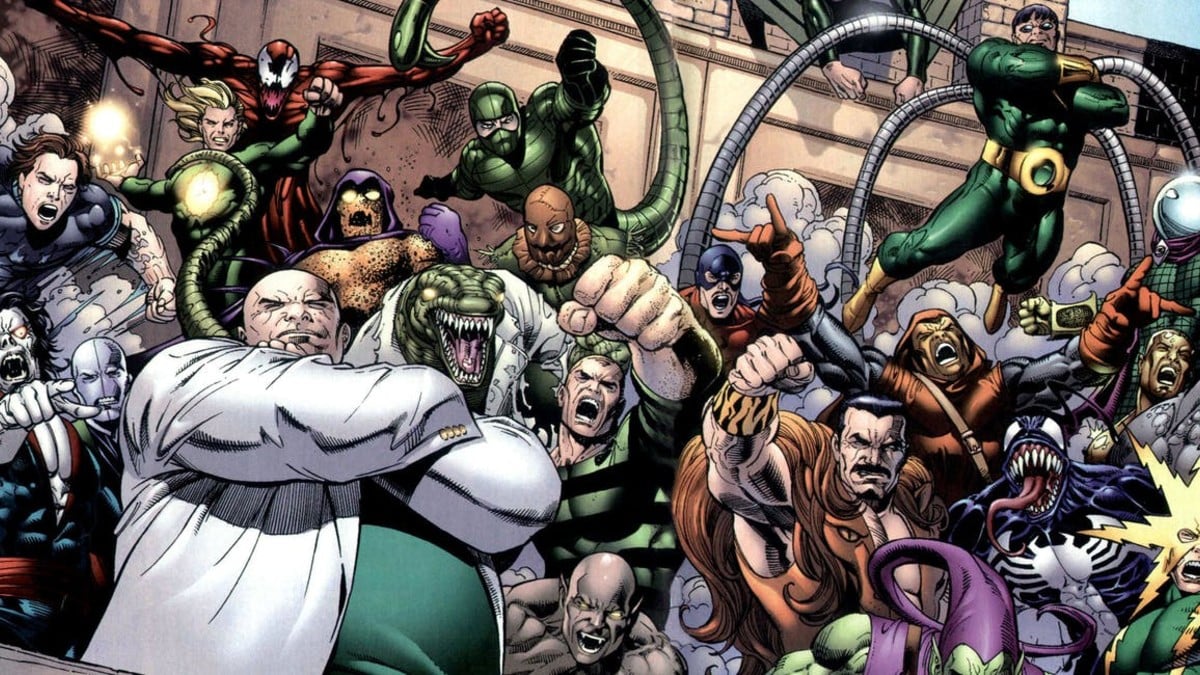 9 Spider-Man Villains We Want to See in the MCU

Spider-Man: No Way Home left us wondering what other Spider-Man villains audiences can hope to see in the MCU.

Spider-Man Villains We Want to See on the Big Screen

In the last twenty years, we’ve gotten eight Spider-Man movies and roughly a dozen villains to grace the big screen alongside these web-slinging heroes. To the delight of audiences, Spider-Man: No Way Home brought almost all of these villains and heroes together in one film. While the movie was good–okay, it was absolutely amazing and easily the best of the Spider-Man films to date—it did leave us wondering what other Spider-Man villains audiences can hope to see in the MCU.

Of all the villains that Spider-Man has faced the Shocker is, well, one of the funnier ones. From his name to his costume (which was originally composed of patches of yellow quilt designed to absorb vibrations), this character isn’t winning any contests when it comes to the most visually threatening enemies our favourite wall-crawler has squared off against. With that being said, the Shocker is a pretty formidable foe that’s gone toe-to-toe against the superhuman Spider-Man despite not having any powers of his own and relying entirely on his vibrational gauntlets. Although we saw both Logan Marshall-Green and Bokeem Woodbine portray the character briefly in Spider-Man: Homecoming (2017), they mostly functioned as henchmen for the Vulture (Michael Keaton) and not villains in their own right.

We take it back; compared to Paul Giamatti’s Rhino in The Amazing Spider-Man 2, the Shocker does seem pretty cool. Although the design for Aleksei Sytsevich was lacking anything in the way of substance in the movie, his comic book counterpart has a rich history when it comes to dealing with, and even helping out, Spider-Man. Originally a Russian mobster who undergoes radiation, chemical treatments, and genetic experimentation to get rhino-thick skin and unnatural super strength, this villain not only battles Spider-Man but even squares off against the Hulk (although it lands him in a coma, twice). He also sees massive character growth in the comics, going so far as to turn himself in and voluntarily serving jail time. He even refuses to join Doc Ock’s evil team and turns his back on being the Rhino ever again… or at least until his wife is murdered.

The Jackal has a long backstory in Spider-Man canon, but that’s because there’s been more than one to grace the pages of a comic book and even the original iteration of the character, Miles Warren, is a bit complicated. Originally, Warren is a professor who develops an unhealthy love for Gwen Stacy, his student. After her passing, he blames Spider-Man for her death and begins experimenting with cloning. He ends up killing his lab assistant and, unable to process that trauma, develops an alter-ego called the Jackal. He ends up learning to fight, acrobatics, and wears a green suit with clawed gauntlets. However, eventually, the Jackal would also experiment with jackal DNA, inheriting super strength and speed. He also uses his knowledge of cloning to make copies of himself and, yeah, it’s a lot.

We know, we know, Black Cat isn’t technically a supervillain but she was originally supposed to be one, although she eventually becomes an ally to Spider-Man, so we’re counting her. Felicia Hardy is the daughter of a world-famous cat burglar. A victim of sexual assault, she trains herself in fighting and acrobatics and seeks revenge on her assailant, only to find out he’d died in a drunk driving accident. She eventually turns to burglary herself. Felicia Hardy first meets Spider-Man while breaking her father out of prison and the two eventually fall in love and have a relationship together. Unfortunately, things go wrong for Black Cat when Kingpin uses a machine that gives her, and everyone she comes into contact with, bad luck. She keeps what’s happened to her a secret, which causes her and Spider-Man to break up, and she’s none too happy when she comes back years later to discover he’s married to Mary Jane.

Much like the history of, well, everyone on this list, the canonical history of the Hobgoblin is complicated, to say the least. In this case, it’s because there have been at least eight iterations of this Spider-Man villain. While we don’t have time to go through every version of this character, we do want to talk about one in particular: Ned Leeds. If you’ve seen Spider-Man: No Way Home (2021) then you know that Peter (Tom Holland) and Ned (Jacob Batalon) have a heartwarming moment where Ned tells him that he’ll never go evil and try to kill him like Harry Osborn tried with the other Spider-Men. Although it was meant to be funny, we can’t help but doubt the truth in those words. In the comics, Ned ends up being brainwashed into becoming a stand-in for the Hobgoblin and is eventually murdered. For a long time, the world believes that he’s the real Hobgoblin but thankfully Peter ends up clearing his name. Despite this, we can’t help but wonder what nefarious and heartbreaking plans the MCU has in store for Peter and Ned’s friendship down the line.

Believe it or not, we’ve actually seen the Chameleon in the MCU, albeit only for a brief moment as a Shield agent posing as a bus driver in Spider-Man: Far from Home (2019). Dmitri Smerdyakov (played by Numan Acar in the film) is the half-brother of Kraven the Hunter. Much like the name suggests, the Chameleon can change his appearance at will. Originally, this character had no superpowers and had to rely on costuming and a serum that made his face more malleable, and then eventually used technology and holographic imaging to project disguises. However, he eventually gets powers that allow him to change his physical form which allows him to make Spider-Man’s life hell (something that becomes all too easy after he learns Spider-Man’s secret identity is Peter Parker).

One of the scarier villains in the Spider-Man universe, this terrifying foe was created by—of all people—J. Jonah Jameson. Seriously. Mac Gargan (aka Scorpion) was originally a private detective that was hired by Jameson to figure out how Peter Parker was getting his pictures of Spider-Man. When Gargan can’t figure it out, Jameson hires him as a subject for an untested procedure to imbue Gargan with the instincts of a scorpion—a natural enemy to spiders—while also giving him body armour. Things, of course, go horribly wrong and Gargan discovers that his armour can’t be removed, which helps drive him mad. In addition to trying to kill Spider-Man (he actually beats Spider-Man more than once in the comics), he also becomes obsessed with trying to kill J. Jonah Jameson for what he did to him. And while we don’t condone murder, we kinda get why.

Sergei Kravinoff, also known as Kraven the Hunter, is the half-brother of the Chameleon and one of the founding members of the Sinister Six. Unlike other villains, Kraven’s ultimate goal is to be the world’s greatest hunter. To prove this to himself, and to the world, he wants to defeat Spider-Man (and has even gotten himself into battles with Black Panther, Black Cat, and Tigra). He also has a surprisingly strong sense of honour and treats all of his adversaries with respect and as equals. Unlike other big-game hunters, Kraven doesn’t like using guns or long-range weapons and prefers to do his hunting with his bare hands. Kraven’s Last Hunt (1978) is an especially compelling storyline that culminates in Kraven’s suicide after he’s able to prove himself despite his declining health. It’s a surprisingly heartbreaking story and one that we can’t help but feel would make an amazing movie in the MCU.

How could we not make Kingpin the top name in this list? Crime lord, entrepreneur, family man, and Spider-Man villain, Wilson Fisk has been a long-time thorn in the side of both Peter Parker and New York City itself. Although the Kingpin doesn’t technically have any superpowers, he does possess an unusual amount of strength (he can punch holes in concrete and throw grown men across rooms) and is incredibly skilled in hand-to-hand combat. Although he has access to advanced weaponry, Fisk prefers to use them only when necessary and, much like Kraven the Hunter, favours his fists over his obliterator cane (it shoots lasers) and wears kevlar under his suit to allow him to fight without the risk of serious injury. Although the Kingpin has recently become more of an adversary to Daredevil than he is to Spider-Man, he still plays a major role in Peter Parker’s life and frequently threatens everything Spider-Man loves and values. And while we’ve seen Wilson Fisk (Vincent D’Onofio) in MCU television shows like Daredevil and Hawkeye, we’ve yet to see him play the central villain in the new Marvel movies and can only hope he makes an appearance soon.