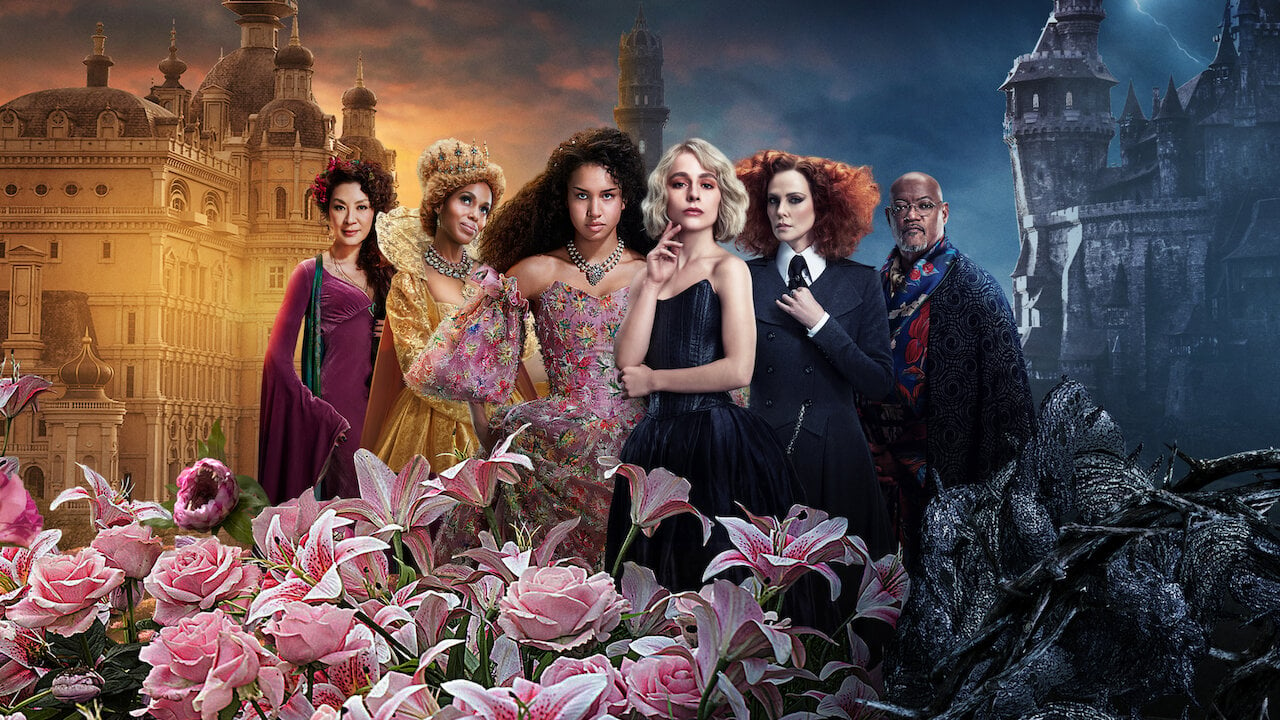 The School for Good and Evil Review

Within the first few minutes, it seems like The School for Good and Evil is going to be a delightful, whimsical, somewhat campy fantasy film with little substance but a lot of indulgent fun and over-the-top performances. It follows this path for at least 20 minutes, but around the beginning of the second act things start to get more interesting; the characters become more nuanced and the plot produces some compelling mysteries that are unexpectedly engaging. Unfortunately, the mystery and excitement set up during this time have a little payoff, and the final act of the film is disappointing enough to tarnish much of the experience, preventing The School for Good and Evil from living up to the promising potential of its middle section.

The premise is simple enough: twin brothers Rafal and Rhian (both played by Kit Young, with Laurence Fishburne playing an older Rhian) establish a school designed to train both fairy tale heroes and fairy tale villains, with the goal of striking a balance between good and evil. Sophie (Sophia Anne Caruso) and Agatha (Sofia Wylie), two best friends, are kidnapped from their hometown and forced to attend this school. Desperate to be a fairy tale princess, Sophie is miserable to learn that she has been sorted into the school for evil; she spends the film trying to convince everyone that she is really good and was placed in the wrong school. Agatha is placed in the school for good, but doesn’t really care which school she is in; what she truly wants is to leave the school altogether and return home to her mother. As both girls struggle to fit in at their new schools, they also begin to discover deeper mysteries and thicker plots that linger underneath the surface of the school for good and evil.

At the start, everything is formulaic but fun. The two girls are best friends despite being superficially very different from each other: one reads fairy tales while the other devours ghost stories, but both find common ground in their status as outcasts. Despite being sure of who they are, they are forced to challenge their preconceptions when the ghost story fan is dropped into a school filled with pretentious princesses and the budding princess is dropped into villain school. While not particularly original, this segment of the film is still fun: fans of campy, over-the-top performances, lighthearted fantasy adventures, or wizard school premises, will likely have a good time.

By the time Agatha starts noticing strange occurrences taking place around the school, the plot begins to promise something more enticing than it originally sets up. There seems to be something off underneath the surface of the school for good and evil; as Agatha learns more about the mysterious fate that seems to befall some of the less fortunate students and uncovers mysterious secrets embedded within the seemingly whimsical fairy tale elements of the school, the film begins to promise a much more thrilling mystery. Between Agatha’s discoveries and Sophie’s mysterious visits from a Phantom of the Opera-style mentor, there are enough breadcrumbs for the audience to follow to keep the film exciting and enticing.

Unfortunately, these breadcrumbs ultimately lead nowhere. The film’s rushed third act, full of odd pacing choices that prioritize awkward action scenes over narrative cohesion, resolves all of the plot threads with clumsy conclusions that are underwhelming at best. There is no payoff for any of the mystery or suspense since these elements don’t build up to anything more than an awkwardly-handled and often cringey climax. Thematically, the film also falls off of the rails, as its commentary about moral ambiguity and human duality gets lost in a conclusion that embraces many of the cliches that the rest of the film seems invested in breaking down. It almost feels as if the film bites off more than it can chew, and its conclusion doesn’t know how to live up to the loftier goals that earlier scenes set.

The climax also highlights one of the other major issues with this film, which is clumsy music direction. Inserting mainstream pop hits into fantasy or superhero battle sequences is not new, and it can often be great: Twilight (2008), for all of its flaws, had some stunning musical action sequences, and Guardians of the Galaxy (2014) stands out as a strong example of pop music in action sequences done well. While the song choices in The School for Good and Evil are solid, these songs are not incorporated into the action or the rest of the audio at all, leaving an awkward contrast between the song and everything else the viewer is hearing and seeing. This is an issue throughout the film but is most painfully obvious during the battle sequence at the climax.

Luckily, one thing that never falters is the cast. A film like The School for Good and Evil requires performers who are willing to embrace indulgence, excess, camp, and extravagance, and the cast manages these styles extremely well. It doesn’t hurt that the creators managed to recruit absolute legends like Kerry Washington, Charlize Theron, Michelle Yeoh, Laurence Fishburne, and even Patti LuPone and Rachel Bloom in small cameos. It’s becoming a strange trend lately for very bad fantasy movies to recruit performers whose fame and skill seem at odds with the low quality of the films; it probably speaks to the rarity of good quality fantasy films in Hollywood that so many performers are willing to settle for some of these projects.

Luckilly The School for Good and Evil is nowhere near as bad as bombs like Artemis Fowl, and the performers’ talents aren’t exactly wasted; the film doesn’t live up to its potential, but it is often very enjoyable. Theron and Washington are particularly fabulous as the deliciously evil Leonora Lesso and the angelic Clarissa Dovey, and their two performances alone make the entire film worthwhile. Sofia Wylie also grounds the film as a relatable and very likeable protagonist, and Kit Young is positively magnetic as the evil twin Rafal.

The film’s weak third act means that most audiences will likely finish the film feeling disappointed and let down. However, the film still deserves praise for what it does well and is worth a watch for fans of fantasy and fairy tales. The world-building is interesting, the locations and costume design are absolutely gorgeous, the performances are incredible, and the majority of the film is still intriguing and fun. Anyone who enjoys magic, adventure, mystery, and a bit of campy indulgence will likely have a solid time watching The School for Good and Evil.

Ticket to Paradise is Anything But