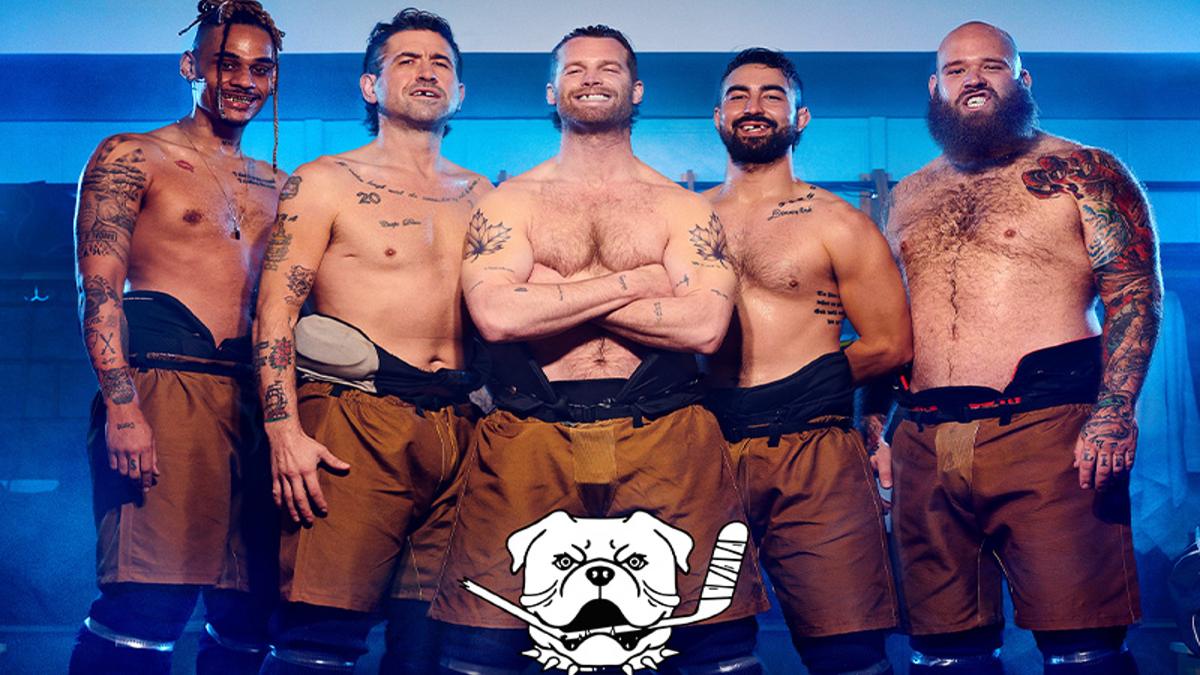 Jared Keeso is a big name in the Canadian television business. Anyone north of the 49th parallel unfamiliar with his name might recognize that of his most famous creation: Letterkenny. First a YouTube series, then a serialized comedy on the Crave streaming service as of 2016, it has been a rousing success. Its ten brief seasons are a testament to the appeal of its rambunctious sense of humour. Now comes Shoresy, the Letterkenny spinoff with just as much bark, if less bite. The 6-part mini serial debuted on Crave in Canada on May 13th and premiers on Hulu in the United States Friday May 27th.

Written by Keeso and directed by regular collaborator Jacob Tierney, the show leaves the fictional town of Letterkenny and heads to Sudbury, Ontario. Shoresy (Jared Keeso) is the fan favourite, vulgar and loquacious side character from the previous series, always heard but whose face has been hidden until now. Playing for the Sudbury Bulldogs ice hockey team, things are not looking good. The team is awful and its overly sensitive head coach Michaels (Ryan McDonnell) quits after the latest drubbing. Furthermore, he plans to fold the club. Not on the owner’s watch however! Nat (Tasya Teles) and her two younger cohorts Ziigwan (Blair Lamora) and Miigwan (Keilani Elizabeth Rose) desperately want to keep the team.

To that effect, Shoresy proposes that he recruit some hockey misfits and promises that “this team will never lose again!” Improve the show on the ice and get butts in seats. If they lose just one of their remaining games, then it will be akin to allowing a goal in sudden death overtime.

If the above synopsis reads a bit silly, well, welcome to Shoresy. Fans of Letterkenny should, theoretically, feel right at home with this new spinoff. The characters are new, but the same creative minds are behind the camera (and in front) and they don’t commit any dramatic changes to what already worked. Think Goon, but as a streaming series.

A Rough Brand of Hockey

What does that mean for newcomers to this…universe? The first thing that must be made abundantly clear is the show’s brand of comedy. The children need to be in bed when streaming Shoresy. Keeso and company keep the jokes coming fast and unapologetically crass. Bodily humour gags, hockey goon gags, intimidation gags, toilet gags, really nothing is left off the table. Nothing. Spoilers shall be avoided, but there are some jokes at the beginning of episode 4 that may surprise even liberally minded people. They are told between characters who deep down appreciate one another, but these are delicate socio-political times and comedy has been in the cross airs recently. Potential viewers with milder sensibilities have been warned.

With the brand of comedy on display in Shoresy, it can be challenging to develop worthwhile characters or a storyline. The writers and directors risk overlying on gags, firing them off like chain gun bullets. There is not much pathos to the show when all is said and done. But how emphatically is the barrage of roughshod humour masking any depth? This is where the performances and casting come into play.

For one, Jareed Keeso has a lot of fun playing this character, delivering lines with a perfect balance of deadpan and raw emotion. As Shoresy keeps stating to anyone who bothers listening, he hates losing and it is important that the team hate losing. The distaste of defeat must supersede the joy of winning. His tough love attitude, along with that of his new recruits, goes some distance to improving the Bulldogs’ lot. The same goes for the club’s owner Nat. Her disgust with being on the losing end of scoreboards and business ventures is keenly felt. Neither are especially pleasant individuals, yet they are trying to accomplish something worthy.

On the topic of the team’s management and supporting characters, Shoresy is filled with some refreshingly non-mainstream casting and writing decisions. Co-lead Tasya Teles is of Canadian-Brazilian descent but plays an Indigenous character. In fact, Blair Lamora and Keilani Elizabeth Rose (Ziigwan and Miigwan) are Indigenous. So is Harlan Blayne Kytwayhat, the soft-spoken Sanguinet who becomes the new Bulldogs coach despite himself. The efforts of co-producer Kaniehtiio Horn, of Mohawk decent, surely help in this respect.

The eclectic characters extend to Québécois personalities. Real life hockey player and hip-hop artist Jonathan-Ismaël Diaby is among the draftees and only speaks in French. Max Bouffard’s JJ Frankie JJ is another player from La Belle Province and his girlfriend tags along for the ride, played by nonother than starlet Laurence Leboeuf.

Is Shoresy worth the detour away from Letterkenny? That depends in large part on what viewers think of the latter. If the original series was their cup of tea, they should respond favourably to the spinoff. The story is more concentrated on a team’s survival rather than the town it represents, but tonally it echoes the original.

Call it a mixed bag. There are noteworthy casting decisions and no shortage of committed performances. On the flip side, this is as far as its gets from being the thinking person’s streaming show. Some subplots are also poorly handled. It also bears repeating that, with respect to comedy, Shoresy plays a variety of hockey worthy of a game misconduct.

Obi-Wan Kenobi Brings The Legend Back to Life