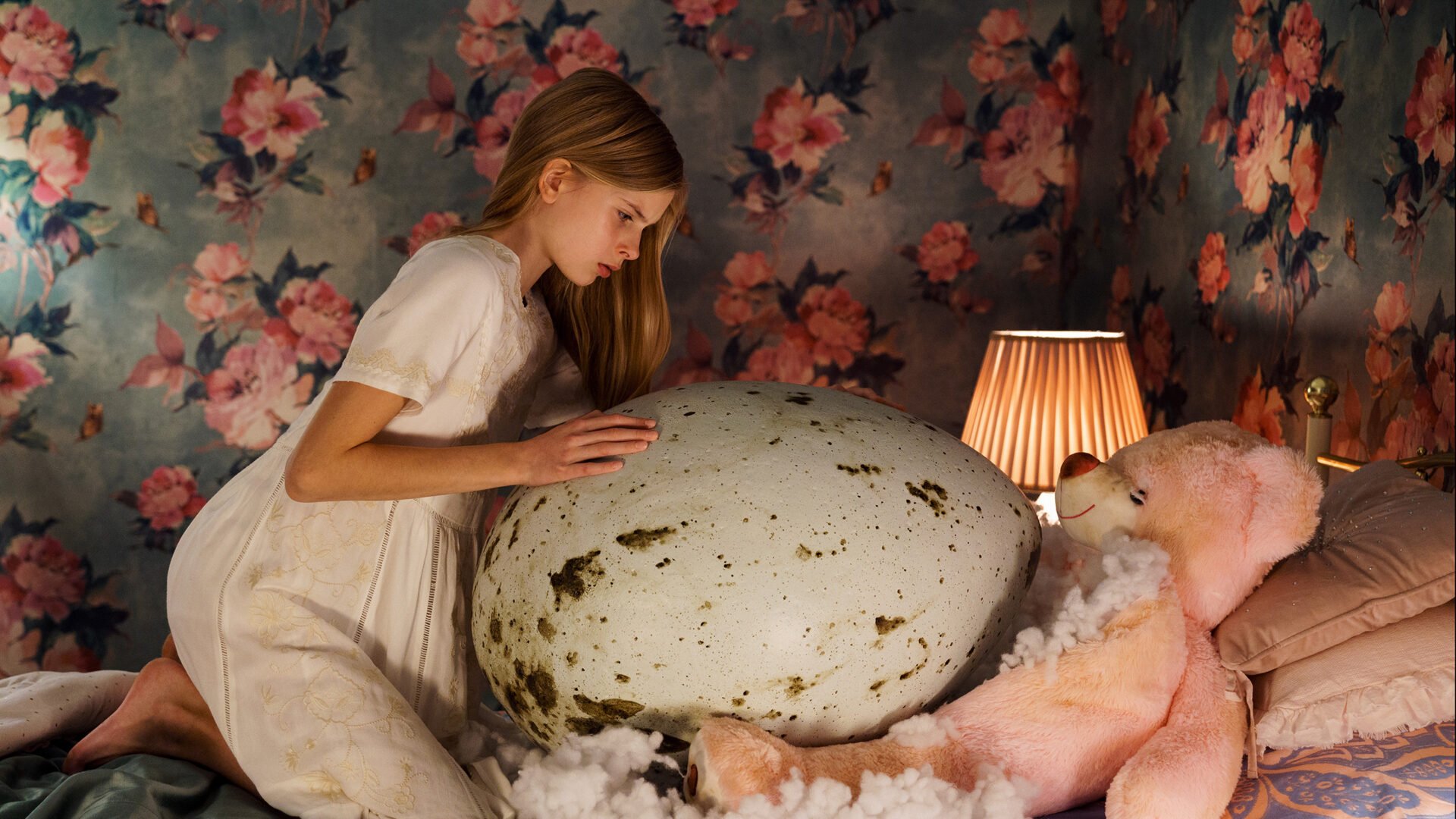 Mother knows best in Hanna Bergholm’s feature debut, Hatching – a grotesque satire of motherhood and parenting that doesn’t shy away from the blood and guts of the process. Written by Ilja Rautsi and directed by Berholm, Hatching is immediately impressive with some of its black comedy and disgusting special effects. However, as the facade of an idyllic life in the central family’s house fractures, so too does the film as its straightforward premise stretches itself thin and its momentum fails its increasingly hungry monster.

Hatching follows Tinja (Siiri Solalinna), a young girl who is expected to do great things by her mother (Sophia Heikkilä). After a bird gets into their picturesque house, Tinja becomes haunted by the bird’s death at the hands of her mother. When she stumbles upon a bird’s nest in the woods one night, she brings the egg home and takes care of it until finally it hatches. Frightened by what emerges, Tinja finds herself bonded to the animal in a unique way and her maternal instincts kick in as she struggles to keep it fed and teaches it to behave just the way she likes it.

It’s the nuclear family and picturesque life that fuels the satire of Hatching. Tinja’s mother is exact in how she wants her life to be, right down to trying to pick pieces of her family and transplant them to another life. She cheats on her husband and disregards her son, but sees the potential for Tinja to continue being a valuable part of her life due to her path being set to be a successful gymnast. The only problem is that the pressure from her mother leads Tinja to spiral and her mother’s rigid views on life bleed into how Tinja takes care of the new creature in her life.

Hatching is sharply written at points, especially with the way it portrays a mother who bluntly forces things into place. Her specific views on what a family should be like and how she wants her life isn’t unattainable, but discredits everyone else in the equation. That willingness to be cruel for a neater, more presentable endpoint is what keeps Tinja an interesting character as we see the effects of that form of parenting. However, it’s Tinja’s attempts to control something that deep down is not supposed to just be a blank canvas to shape creates the schism in the creature’s relationship with Tinja.

That’s what leads to Hatching’s gleefully gory presentation. Seeing the ramifications of not taking care of her newfound friend the way it needs to be, Tinja finds herself struggling to be a mother and a daughter at the same time. The fringes of her life are slowly teared at until she’s forced to face the impact of her parenting decisions. It’s insightful violence intended to illustrate the cruel way we force people to fit our expectations and while it sometimes leans more on shock value than purpose, Hatching is often straddling that line rather elegantly.

Bergholm’s film only truly falters by having a somewhat stop-and-start pacing to it and never really feeling focused on one storyline versus the other, or marrying the two narratively until too late for it to really leave an impact. Hatching does a fine enough job allowing the parenting of Tinja’s mom to trickle down into a nightmare scenario, but by frequently pulling back to spend more time with her mom, Tinja’s creature feels more like an afterthought. Despite its bumpiness, Hatching still delivers an insightful commentary and some bleak humor that pairs nicely with the occasional bout of blood and gore.

Resurrection is a Nightmarish Ride with a Committed Rebecca Hall Performance

Nanny is a Tense, Singular Vision