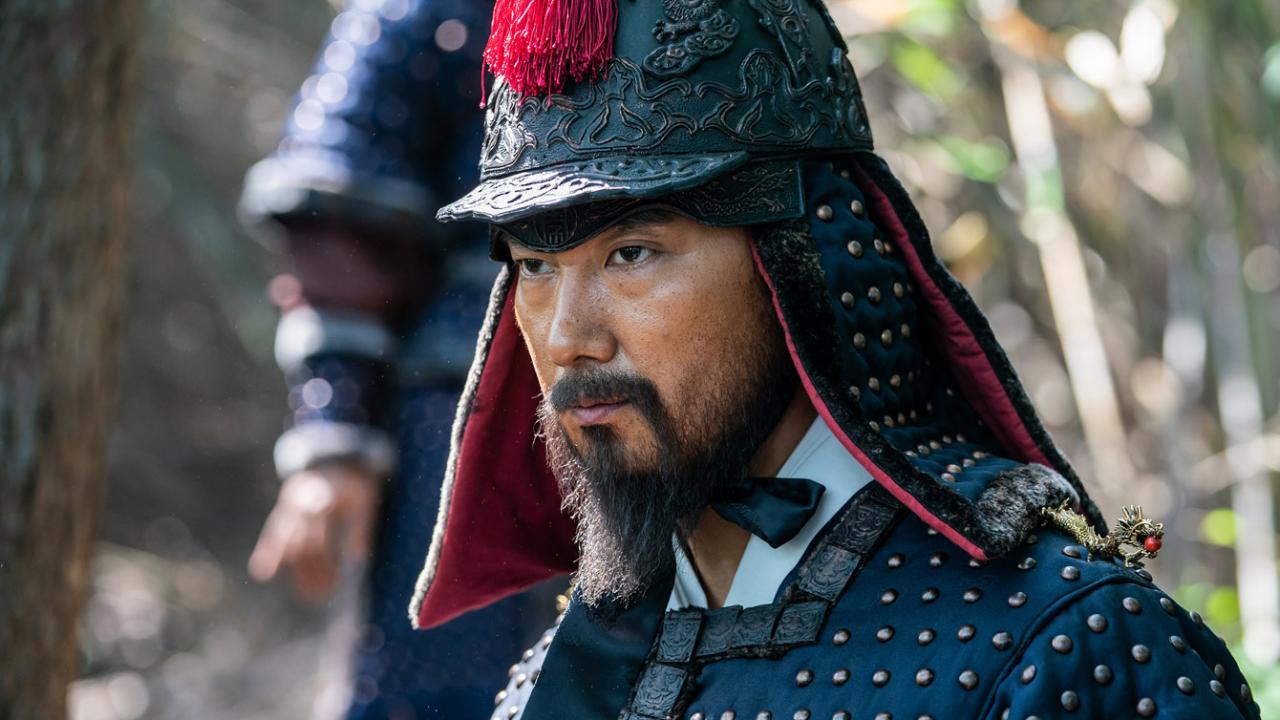 It has taken some time for South Korean director Kim Han-min to make the second entry in his trilogy of films about the legendary admiral Yi Sun-sin. The first film, The Admiral, was released back in 2014. Undeterred, the filmmaker adopts more modern moviemaking techniques this time around to deliver the middle chapter (loosely) of the story of the naval fleet Admiral who no less than three times engaged in epic warfare against the invading Japanese army in the late 16th century. Hansan: Rising Dragon continues his amazing career.

In July of 1592, the Joseon Dynasty (which lasted about 500 years from the 12th to the very end of the 19thcentury) is defending its shores and inland from powerful, terrain-hungry Japanese forces. The latter has recently struck a brilliant, unexpected victory under the command of Wakisaka Yasuharu (Byun Yo-han). Despite only 2,000 men against tens of thousands, their bold attacking style has shaken the Korean defense and morale. Determined, the Koreans have a surprise of their own. Admiral Yi Sun-sin’s (Park Hae-il) impressive fleet boasts a ship that few opponents can withstand, let alone fully comprehend. Their geobukseon, or “turtle ship”, lays waste to sea-bound threats. Covered by a resistant shell, armed with side cannons, and equipped with a protruding dragon head ram, the turtle is the ultimate weapon at sea. That is until it suffers a setback that the Japanese seek to exploit. As the enemy makes its way northward into the Korean peninsula, spies are everywhere and a tremendous battle in the waters around Hansan Island is foreseen.

Fans of historic military epics can flock to Hansan: Rising Dragon knowing that they will ostensibly get their money’s worth. The winning formula is well known by astute filmmakers and moviegoers at this point. Only the variables that make up the battle plan need updating. The movie needs to open with narration that sets the stage of why and where a given conflict is transpiring. Viewers are also informed what the scorecard reads at the time the film’s events begin. What follows are usually a decent battle sequence early in the picture to get the blood pumping, then military strategizing on both sides for the big finale, with intermittent skirmishes to make sure those easily bored by army speak don’t fall asleep.

For all intents and purposes, Hansan follows the template described above to a tee. A review for a brand new movie shan’t divulge major spoilers, but if one has seen a few military epics, there isn’t that much to spoil anyhow. There is also the fact that the naval contest fought around Hansan Island really happened. From what history informs, it mostly developed in a similar manner as in the movie, save of course for directorial flourishes in the midst of battle to make it feel cinematically epic.

And epic it is. Considering how the overwhelming majority of blockbuster movies are created in the 21st century, Kim Han-min delivers what is a “motion picture event.” While the previous entry in the trilogy was filmed with a respectable amount of on location shooting, the sequel takes advantage of digital enhancement. Lots of computer-generated water, backgrounds, cannon fire, explosions, etc. This is where the film may lose some people. To be perfectly fair, the digital effects teams do a handsome job recreating naval battles that erupted 430 years ago. Even in 2022, with movies so large in scale, digital enhancements still have their limitations. Not every single shot looks completely believable. Conversely, and this may be because the effects teams are working from historical documentation which serves as templates, it all looks pretty good. Nothing in the film is offensively artificial. Even the one scene in which it feels like director Kim Han-min is pushing the envelope too far features a trick up its sleeve.

The filmmakers straddle the line nicely between action and military planning. Hansan features one solid naval contest at the start, a humungous one in the final act that takes up at least half an hour, and a couple of fun on-foot battles in the middle. Between the bombastic moments are deliberate, detailed oriented conversations on both sides about what to do next. Who will attack, who will defend, how, why, and what formations to use? True enough, one needs to be mildly interested in the concept of military strategy to find these stretches engaging. For those that are, the discussions are thrilling. The palpable tension that hangs above planning what could be a decisive naval encounter when one’s trump card (the turtle ship) may be missing in action is clearly felt.

Both Yi Sun-sin and Wakisaka are experts in their fields. Great leaders with personal pride, national pride, and the future of their countries at stake. Even though they never see each other up close, when they talk to their advisors and captains, one gets the sense that they envision their rival at the same time. Everything they think and say takes into consideration what the other might do in retaliation. It’s handled convincingly given that the two never cross swords once throughout the entire picture.

Hansan : Rising Dragon is a summer blockbuster that mixes old school with the new. Superheroes and blue ray beams that fire from the clouds down to Earth are absent. Kim Han-min wants to wow audiences with a historical battle that decided the fate of an entire country. By the same token, there is a lot of CGI involved, although most of it is convincing and looks good. Water is notoriously difficult to reproduce in computer animation and there is a ton of it here! For movie lovers that enjoy a good military epic, Hansan emerges from battle with honour intact.

Not Okay is a Pitch-Black, Mostly Successful Social Media Satire