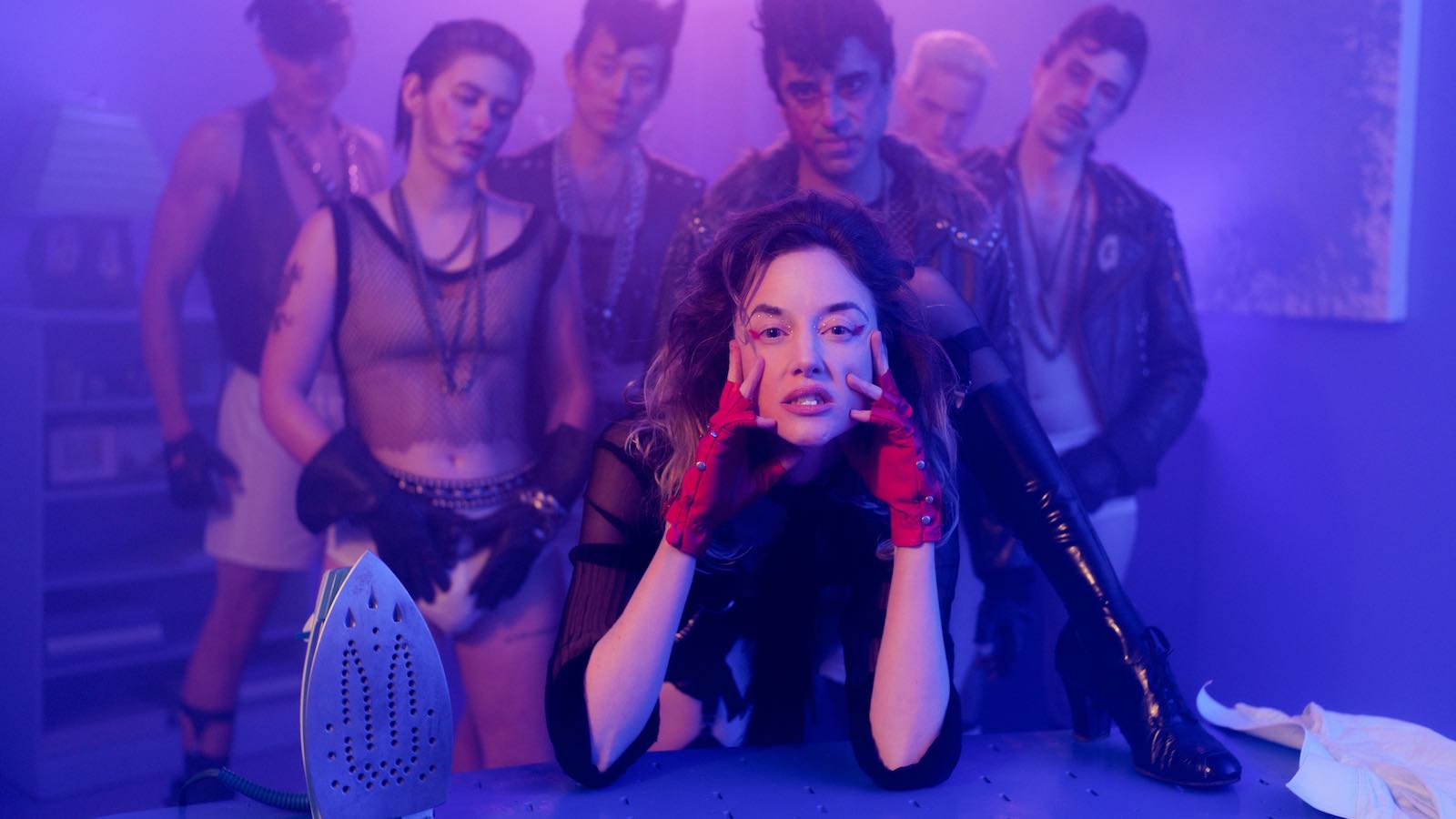 There is something extremely satisfying about seeing a film that knows exactly what it wants to be while using every element at its disposal to fully capture this vision. In Please, Baby, Please, Amanda Kramer expertly crafts a hazy, dreamy world that absolutely engulfs viewers in a fantasy of steam, sex, and just a touch of pulp. Every line and shot is designed to pull viewers more and more completely into the distinctive and enrapturing universe of Please, Baby, Please, and the result is an absolute thrill.

While Please, Baby, Please is more of a dreamscape than a linear narrative film, the plot is still well-established. Suze (Andrea Riseborough) and Arthur (Harry Melling) are a very trendy, popular bohemian couple who spend their days engaging in salons with their artistic beatnik friends. While the two look like a perfect couple, it is clear that they are deeply unsatisfied. A chance encounter with a greaser gang serves as a sort of sexual and emotional awakening as both begin to grow in their relationships to gender and sexuality while interacting more frequently with the gang and the city’s underworld.

It is interesting to see a film where urban-dwelling bohemian artists are depicted as living lives of repressed, quiet desperation. These stories are usually reserved for suburban and small-town characters, and they rarely feature artists as the main figures of repression. It is an interesting take on bohemian culture, and one that reframes common depictions of who is truly liberated; as the film suggests, even an avant-garde artist community can become as rigid, stifling and repressive as an idyllic suburb.

As Suze and Arthur spend more and more time with the greaser gang, they embark on a journey of sexual and gender expression that is brilliantly depicted through a series of steamy, sexy vignettes. The film follows the characters through a montage of porn theatres, bathroom hookups, kink-inspired dance numbers, extravagant fashion choices, mysterious wealthy women, sexually-charged dishwashers, and intensely raw encounters in bars, apartments, and city streets. As the characters struggle to reconcile their new developments and experiences with their old life, they’re forced to challenge everything they take for granted about what they are and are not supposed to do.

The writing is heavily stylized in a way that works perfectly for the film’s atmosphere. Every line of dialogue serves to further establish the extremely distinctive world into which Please, Baby, Please is designed to transport viewers. Mixing rebellious greaser dialogue with beat poetry, the film is equal parts James Dean and Jack Kerouac. However, the film is more than just the sum of its inspirations; it takes these styles and combines them to create something new and beautifully distinctive. Lines are both poetic and pulpy, channeling both the profundity of beat poetry and the indulgent stylization of a Raymond Chandler novel.

The design is stunning. The film’s hazy 1950s urban cityscape is stylized with a neon pink and blue color scheme and copious bisexual lighting. Hot pink trashcans line smoggy alleyways, taking something like West Side Story and giving it a more modern touch inspired by queer cinema history.

The performances are also stellar. Riseborough is absolutely electric: she brings wild and erratic, yet still emotionally-grounded energy to Suze which makes her an absolutely stunning character. Melling is absolutely adorable as the perpetually overwhelmed Arthur, and his dynamic with love interest Teddy (Karl Glusman) is both heartwarming and incredibly, incredibly sexy. Another phenomenal performance is given by Ryan Simpkins as Dickie, a greaser with anger issues who desperately wants to express a sensitivity that is constantly denied to him.

Something remarkable about Please, Baby, Please is that it maintains the tension and queer subtext of homoerotic 1950s films like Rebel Without a Cause without denying explicitly queer representation. Rather than choosing between text and subtext, Kramer manages to dabble in both, balancing the intensity and ambiguity of highly suggestive scenes with the catharsis of more explicitly sexual scenes. The film explores the excitement that comes from the implicit without sacrificing the explicit, and it is rare to find a film that navigates this delicate balance so well.

The one small flaw in an otherwise stellar film is that Please, Baby, Please sometimes drags a little bit, and it is occasionally repetitive. There are some parts that are drawn out just a little too long, some motifs that are repeated a bit too frequently without enough variation or development, and some scenes that feel unnecessary and could have been cut. A bit more time in the editing room could have helped to polish up the film a bit and avoid these too-draggy moments. That being said, the sometimes mismanaged pace is more than worth it for the rest of the stellar film.

Please, Baby, Please has a lot to say about gender, sexuality, and queer history, and it says it brilliantly through a beautiful and intense dreamscape of a film. The film is perfect for anyone who wants to spend some time being completely immersed in a sexy and stylized world. One of the highlights of Fantasia 2022, Kramer has absolutely hit a home run.