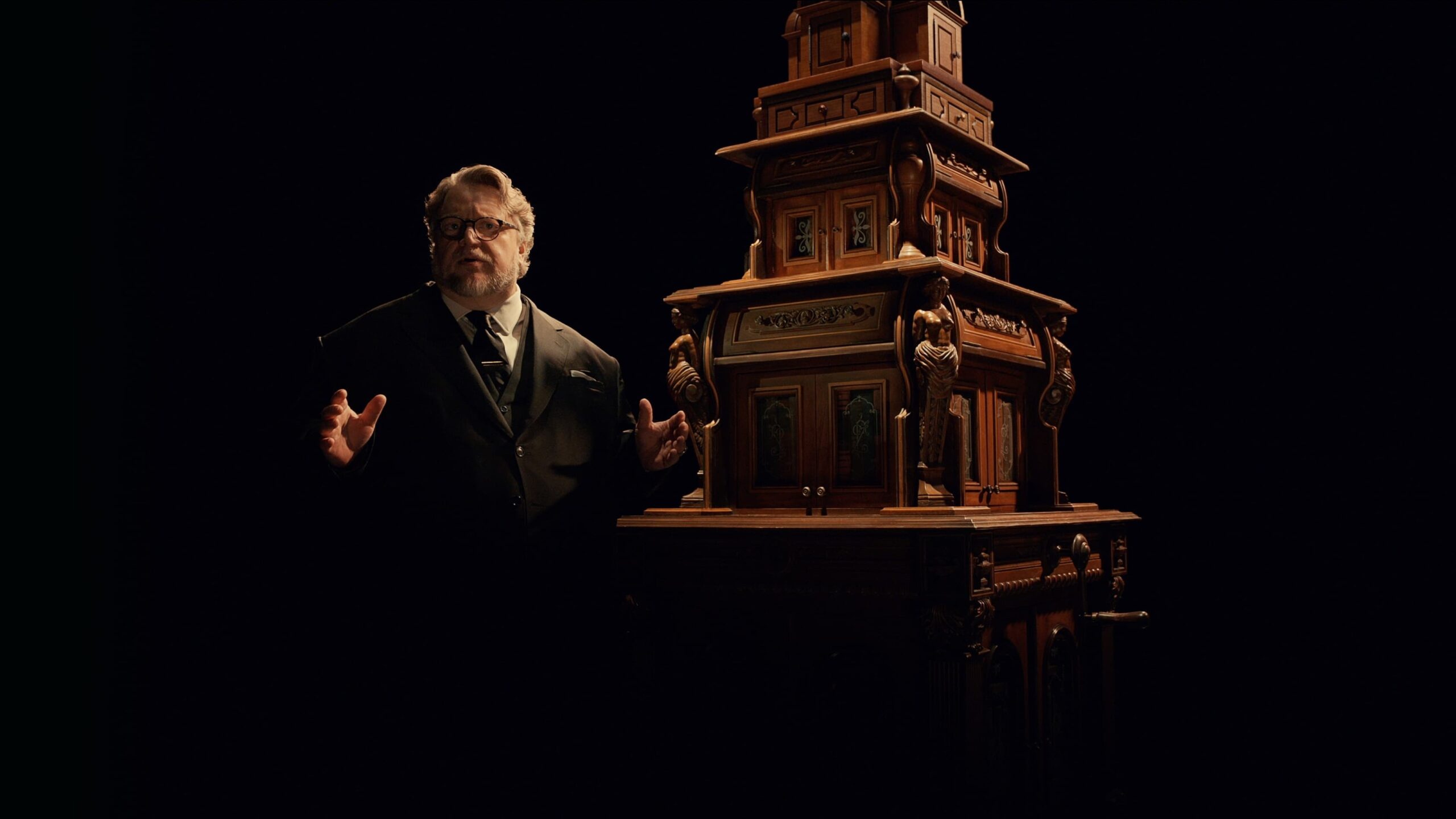 Just in time for Halloween, Netflix and executive producer Guillermo Del Toro deliver an octet of spooky stories in the anthology series, Del Toro’s Cabinet of Curiosities. Del Toro is a beloved voice in contemporary film. He’s made such memorable and lauded efforts as Cronos, Pan’s Labyrinth, Hellboy, and his Best Picture-winning The Shape of Water. His roles for Cabinet of Curiosities are limited to co-writer on a couple of the short films and producer. This, as comparable examples demonstrate, could be a cause for concern. Having a big name appear in the credits as a producer (Steven Spielberg for the Transformers series, John Carpenter for 2005’s The Fog) is not a guarantor of quality.

As previously exercised for the most recent season of the hit show Stranger Things, Netflix is not releasing all episodes simultaneously. 2 chapters see the light of day starting October 25th through the 28th. All are written by different scribes and helmed by a different director. A potpourri of eclectic talent flexing their muscles one more in the horror genre. Anyone who has seen even just a few anthology films or series knows that styles will vary, as will the tones, and, alas, the quality. Considering that Cabinet of Curiosities features 8 instalments, a veritable mini-Twilight Zone, one best arm themselves with patience in the worst case, and an open mind in the best.

A Who’s Who of Horror Fans

One imagines Del Toro’s involvement had the ears of talented people perk up with interest. Looking at the list of creatives involved, it’s a lineup of writers and directors who have all known varying degrees of success either on television, streaming, or theatrically. Sometimes it’s long-time Del Toro collaborators, like Guillermo Navarro, who has dabbled in tv over the past decade and handles duties on the first chiller, “Lot 36” (one of two Del Toro co-wrote). It shares the story of an angry, lonely man (Tim Blake Nelson) who circuitously “wins” a storage lot belonging to a deceased man with interests in the occult.

Vincenzo Natali guides the second creepy tale, “Graveyard Rats,” about a down-on-their-luck if impressively verbose grave robber (David Hewlett) who owes very bad people a lot of money. His efforts at nabbing golden teeth and jewelry from coffins are foiled by an unexpected foe: rats, who prove far more threatening than he could have ever bargained for.

Other creatives are relative newcomer David Prior, veteran Catherine Hardwick, gore-hound Panos Cosmatos, Keith Thomas, Jennifer Kent (The Babadook) and Ana Lily Amirpour, who made a big splash in 2014 with A Girl Walks Home Alone at Night. No one can accuse Guillermo Del Toro of not surrounding himself with capable storytellers. Not to be forgotten in the proceedings, the Mexican director introduces each chapter as he opens the drawers of his multi-levelled, eponymous filing unit.

A Little Too Much of Everything

The first two chapters described above, when viewed back-to-back, exemplify the roller-coaster ride that is this ambitious if uneven endeavour. Navarro’s effort is a slow burn up until the final few minutes, preferring to build mystery with the tiniest of clues dropped along the way. Conversely, Natali goes for broke with a lark of an episode, albeit one with a definitive creep factor for anyone who dislikes rodents (read: almost everyone).

Therein lies the critical, delineating factor about a show like Cabinet of Curiosities. Does one prefer a slow-burn mystery or a loud, loopy misadventure replete with jump scares? Some people like both, and good for them. Others do have a preference, thus making a sit-through of all 8 installments a challenge since they vary drastically in pace and attitude.

A story like “The Murmuring” (Jennifer Kent) is about the tragedy of a couple dealing with grief. Said yarn is wrapped in a ghost story, but is essentially a delicate, relatively meditative film about starting a new chapter in one’s life. A ghost appears now and then, but it also features more birdwatching than anyone is most likely to guess. Contrast that with “The Autopsy” (David Prior), which seems to revel in showing off the prosthetic effects of cadavers. It isn’t that they don’t look good, they certainly do. That said, anyone with a slightly weak stomach will never be able to digest it.

One supposes that is part of the fun, creative process of birthing Cabinet of Curiosities. The project offers 8 opportunities to do just about anything directly or tangentially related to horror. The risk run is that in trying to appeal to horror fans from all walks of life, the show as whole appeals to precious few. Individual episodes will, and that’s nice, but it’s difficult imagining most people finding the entire octet absolutely smashing. Unfortunately for its sake, this is a review of the whole package.

Beyond the wildly unpredictable styles that viewers will discover each time they press play on a new episode, a few words should be said about episode structure. After all, arguing that an anthology series or movie is “uneven” is not the most original criticism one can muster.

In a curious development, it just so happens that the first two episodes, “Lot 36” and “Graveyard Rats,” are the shortest of the bunch, both running well under 50 minutes. The second is under 40 minutes in fact. For whatever reason, virtually every subsequent installment hovers around the 60-minute mark. The point being made here isn’t that they are too long to be considered shorts (technically speaking, a “feature film” is 80 minutes in duration). Rather, the issue is that some drag despite being only 60 minutes. When a “short film” feels long, that’s not a great sign.

One reason for the run time’s heaviness is that certain episodes take the show’s title quite literally. They are “curiosities.” They don’t have much of a drive, a theme, or a throughline. Say what one will about the lack of scares in “The Murmuring” (although anyone can be frightened by anything, technically), it holds itself together with a theme. In contrast, there is “The Viewing” (Panos Cosmatos), which spends about 45 minutes doing one thing that has little to do with horror, then 15 minutes doing something radically different, and ends abruptly. What was the point? Presumably, director Cosmatos has the answer, but no one can be blamed for thinking it was no more than, well, a curiosity.

Then there is “Dreams in the Witch House” (Catherine Hardwicke) which goes off in so many directions, flip-flopping between many ideas. The intention might have been to deliver a thrill ride, and fair enough. The end result is more confusing than anything else. It’s based on an H. P. Lovecraft story and that author has ardent fans, so they may get something out of it. Who’s to say?

Ultimately, knowing that the show contains 8 episodes, most of which last about an hour, and that 2 are released over the course of 4 days, should one spend the week leading to Halloween watching Cabinet of Curiosities? Sadly, no. Read up on the plot synopses, check out who wrote and directed them, and, when applicable, what the episode is inspired by. With that information in mind, pick and choose what suits one’s fancy.

A more thematically and stylistically focused endeavour may have been a wiser plan of action. An anthology of gory shorts, ghost stories, or murder stories. The public would be able to discern “I like/love/loath that therefore I will/won’t watch it.” As it stands, the series is better broached by carefully by sifting through credits and non-spoiler plot information. Not every drawer conceals what could be considered a good scare.