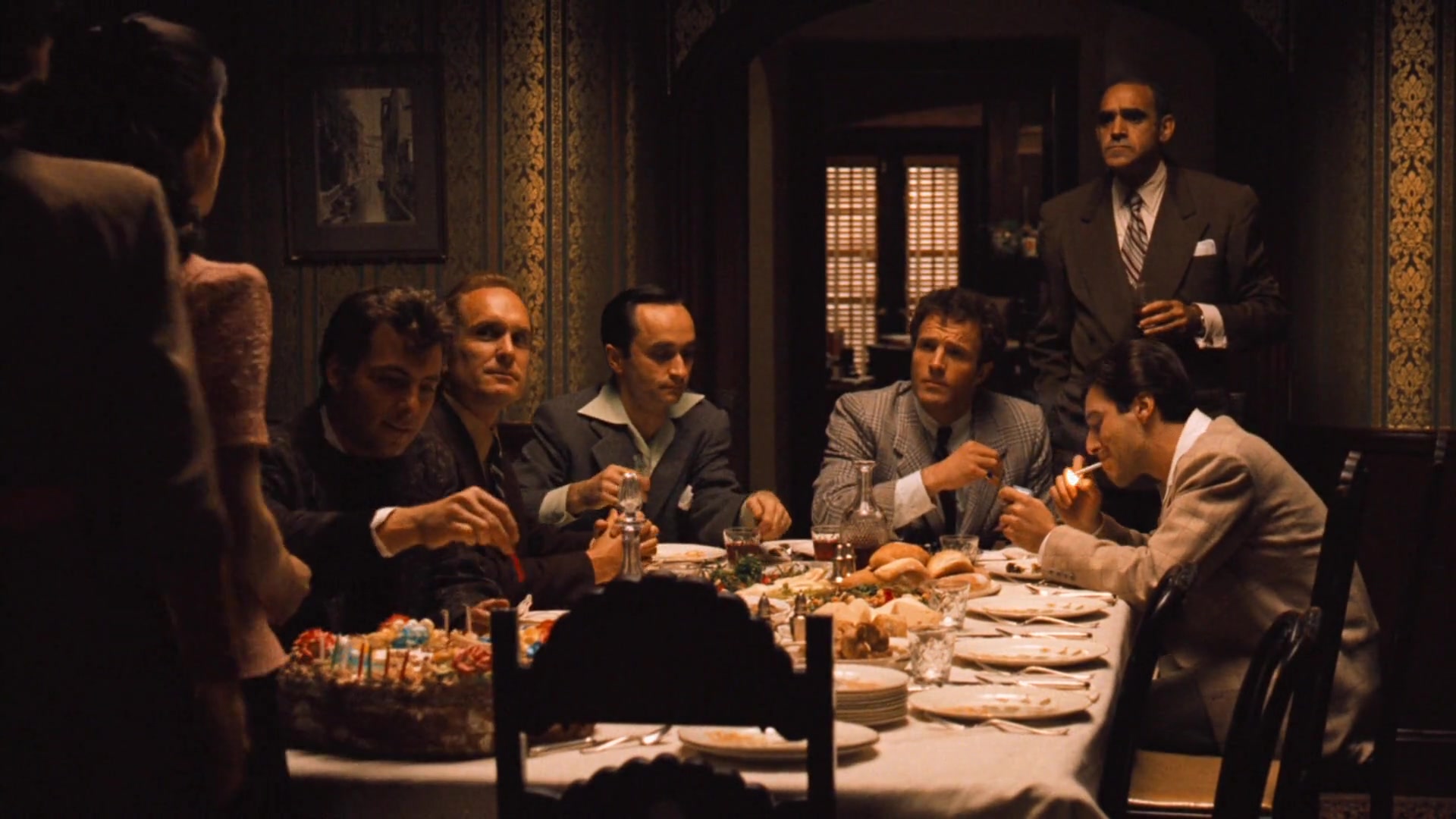 There has been no lack of superlatives used to describe Francis Ford Coppola’s The Godfather. So taken for granted is its greatness, one doesn’t even need to have seen it to know that, next to Citizen Kane, it remains the standard by which cinematic portraits of American striving are measured. Simply put, we can’t watch Goodfellas, The Sopranos, or even The Simpsons and Family Guy without being reminded of its influence. However, up until recently, my dark secret was that while I knew The Godfather was a great movie, I had never actually sat down and watched any part of the trilogy. Perhaps it was based on a reluctance to watch a nine-hour gangster saga, (the genre has admittedly never been my cup of tea), or maybe I was afraid to “gasp” dislike these canonical works and thus risk never having my opinions taken seriously again. Whatever the reason, after briefly putting aside my neuroses and finally watching the three films, I felt relieved at being drawn into the violent, criminal, yet somehow romantic and morally informed world of the Corleone family. It’s not uncommon for The Godfather saga to be compared to Shakespearean tragedy, and it’s fascinating just how accurate this connection is. Of course, even Shakespeare has his problem plays, and each of the three Godfather films is not without structural imperfections. At the same time, just like the Bard’s weaker works are nonetheless considered worthy of study, many of the trilogy’s “flaws” are what contribute to its enduring impact.

Out of all three films, the experience of watching the first installment is the most akin to finally visiting a famous art museum when you’ve only just browsed through coffee-table books: “Leave the gun. Take the cannoli,” “Make him an offer he can’t refuse,” “He sleeps with the fishes,” are just some of lines that have been part of pop culture for as long as I can remember. (Heck, the scene with the horse’s head was brought up in an episode of 2 Broke Girls just a few weeks ago.) Even Marlon Brando’s brilliant performance as Don Vito Corleone, with his distinctive mannerisms and speech patterns, seems to ring a bell from the moment he appears. Yet, more than just a trigger of déjà vu, the first Godfather is also the chapter that comes closest to perfection. While I admit that there were times where I had the audacity to question the director’s genius (“Did Coppola really need to wait a good 45 minutes before setting up the main conflict?” “Isn’t it a tad wasteful to have that gruesome horse’s head sequence involve such tertiary characters?”), you can rest assured that these observations seemed rather petty when the film reached its brilliant conclusion. A consistent element of the three films is Coppola’s demonstration that he knows exactly how to put together a final act, and every moment in the first Godfather’s closing half-hour perfectly encapsulates the raison d’être of everything that’s come before. The film is ultimately about the reluctant transfer of power from one Don Corleone to the other. When Michael Corleone (Al Pacino) both literally and figuratively closes the door on his wife Kay (Diane Keaton), the unsettled look on her face in the final shot can stand in for the audience’s own unease: We realize that not only has Michael fully crossed over to the life of crime he tried to separate himself from, but his colder, more ruthless approach to business suggests that he’ll be a more dangerous and somehow lesser Godfather than the family-oriented Don Vito was.

Just as Michael does in fact turn out to be a more ambitious, but less graceful Don than his father, it almost seems appropriate that The Godfather Part II aims higher than its predecessor and occasionally produces messy results. As far as the original film is concerned, it is Brando’s sublime performance, even more so than Pacino’s magnificently subtle one, that is the most crucial to establishing the film’s tone of operatic realism. So it’s quite remarkable that not only does Part II work without Brando, but that Coppola takes Don Vito’s ghost, and the void left by his absence, and has it permeate through every scene. Coppola does so by shifting between two narratives. One follows Michael at the peak of his power as he tries to figure out who ordered an assassination attempt on him, while the other focuses on a younger Vito Corleone (played by Robert De Niro) gradually laying the foundation of his empire. In themselves, the two storylines are compelling examples of masterful storytelling that also highlight the contrast between the two Dons. (Even the cinematography of each narrative seems to be at odds with that of the other. The Don Vito scenes have a nostalgic, romantic look and feel to them, while the Michael-oriented segments seem cold, seedy, and predominantly blacker.) Unfortunately, each story loses a little something from having to coexist in the same movie. For instance, much of the Michael plotline involves Pacino probing several new characters while the audience tries to determine just how much of what he says is actually false. This is not a problem in itself, but in continuously going back to scenes involving De Niro (and a whole other set of supporting characters to keep track of), a viewer is at risk of losing his or her bearings, which can prevent complete immersion in one (or even both) narratives. And while Part II’s overcrowding can obviously be more effectively dealt with in subsequent viewings, the mere fact that, as I write this, I can’t distinguish, for example, Tessio from Clemenza without turning to the Internet makes me wonder if Coppola’s 200-minute opus asks for too much from the viewer.

However, none of this takes away from Part II’s most satisfying aspect, which is that it accomplishes what so few sequels do in having its key players transform in ways that are plausible and consistent with our memory of the original. In Part II, we meet altered versions of Michael, Kay, Fredo and Connie, but their changes in characterization seem perfectly logical and even enrich our understanding of the first Godfather’s themes and dynamics. In the great debate as to which film is superior, The Godfather tends to gain a few points above the sequel due to its streamlined and more balanced narrative. But while the original Godfather may technically be able to exist as a stand-alone film, it’s doubtful that anyone who’s seen Part II would actually want it to.

Unfortunately, this is not the case with The Godfather Part III, which is widely considered to be the weak link in the trilogy. It’s certainly never wise to have high hopes when a sequel is released sixteen years after the last installment (on the audio commentary Coppola even admits to financial woes as a deciding factor in making the film). Yet while I can go so far as to quote fellow cinephiles who insisted that I didn’t need to even bother watching Part III, I can’t bring myself to denounce it as “the bad Godfather.” If the film is less involving than the first two, this is partly because it relies too heavily on new characters that never quite hook us. Before she redeemed herself by switching to directing, non-actor Sofia Coppola had the infamy of supposedly ruining the film with her wobbly turn in the role of Michael Corleone’s daughter, Mary. (Yet while there’s no denying Ms. Coppola’s distracting greenness, I would agree with Roger Ebert’s defense that her awkwardness and out-of-place nature are rather appropriate to the character.) On the other hand, acting is certainly not an issue for Andy Garcia, who brings a reckless intensity to the role of Sonny Corleone’s illegitimate son, Vincent, but he often seems to be little more than a clone of James Caan’s character in the original. And while the corrupt Vatican plotline admirably plays around with real-life events, its execution is slower and talkier than anything in the first two films. (Although to be fair, after the intricacies of Part II, my relative disengagement may have stemmed from an unwillingness to keep up with yet another convoluted plot.)

At the end of the day, however, it’s hard not to be impressed with the way Coppola demonstrated in Part III that he didn’t lose touch with the world he had created over ten years earlier. The third installment can even be seen as Coppola’s attempt to address the role of women in the trilogy as a whole. In the original Godfather, Coppola makes it clear that women have zero access to the men’s business affairs and seemingly leave minimal impact on their hearts. For instance, when Michael escapes to Sicily and marries the beautiful Apollonia, so one-dimensional is the character, that Michael doesn’t seem to be falling in love with a person, but rather with the Old World romanticism and simplicity she represents. Later on in the first film, Connie and Kay instinctually know that Michael is turning into a monster, but seem to accept how little they can do about it. In Part II, Connie and Kay seem bolder; they may not be able to stop/save Michael, but they are at least able to get his attention. However, in Part III, the female characters are more powerful than ever: Connie no longer sits on the sidelines, and helps Michael run the business in a manner worthy of Lady Macbeth. Meanwhile, it dawns upon us that it is Kay who knows Michael better than anyone else, and despite her claim that she “dreads” him, she is fearless in his presence. Indeed, it is only when Pacino and Keaton are onscreen together that we get a glimpse of the fresh-faced young man we met way back in the first film.

And then, of course, there’s the tragic figure of Michael himself, who at this point in the story has become a tired, haunted and remorseful figure. The final two minutes, complete with flashbacks, Lear-like howling and jarring makeup, are just this side of corny (and make for a less effective conclusion than Part II’s perfect final moments), but are also an appropriately melodramatic and heartbreaking farewell to the world of the Corleones.

And what a distinctive world it is! With his brilliant cast, superb cinematography, and haunting score by Nino Rota (which ensures that the audience stands no chance at feeling anything other than sadness for events that, in a more conventional crime story, would not evoke such an emotion), Coppola created a set of films that neither have a “70s aesthetic” to them, nor feel like “period pieces” as the story spans from 1901 to 1979. Indeed, whether you’re meeting the Corleones for the first time, or know the film so well that you can anticipate every character nuance, what ultimately makes The Godfather saga so indelible is its peerless mix of grandeur and intimacy, violence and regality, and populism and artistry.

Tim Burton or Christopher Nolan, Who Did Batman Better?

All the Texas Chainsaw Massacre Movies Ranked Worst to Best