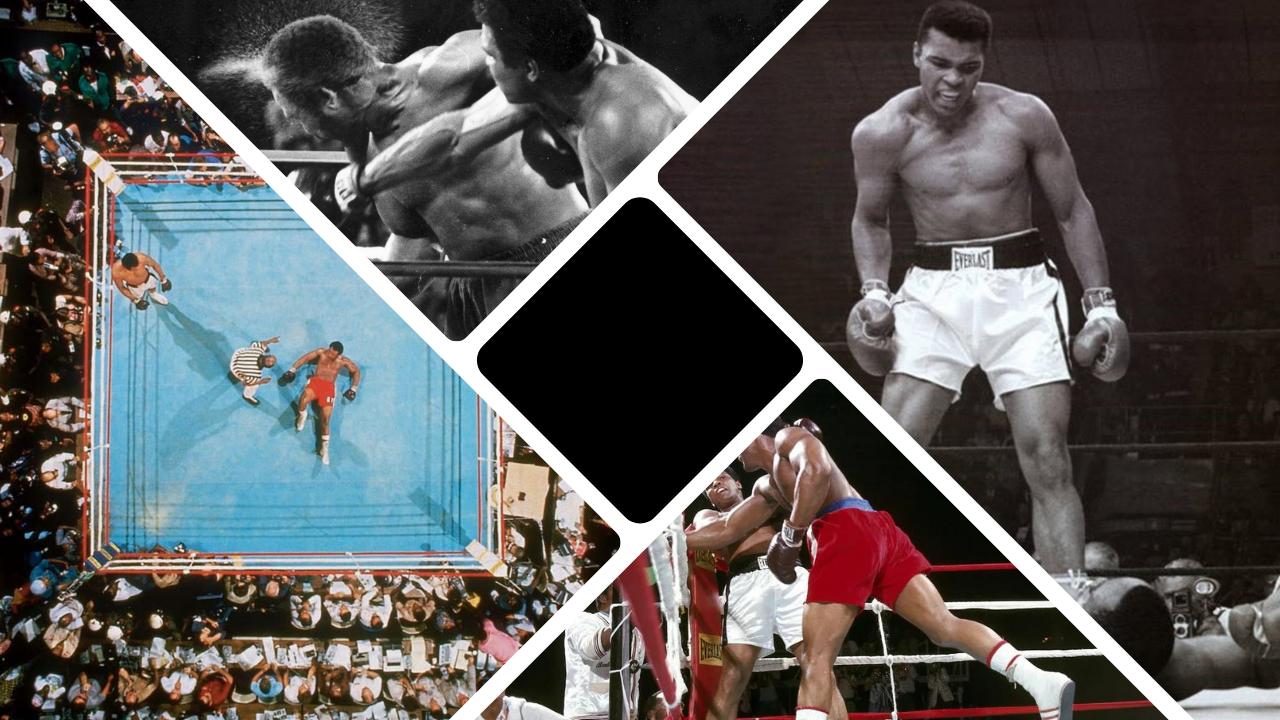 The Rumble in the Jungle
Muhammad Ali vs. George Foreman

The Rumble in the Jungle, the first and only fight between Muhammad Ali and George Foreman, was not only the biggest fight of the 20th century but possibly the most memorably documented.

The fight between Ali and Foreman took place in Kinshasa, Zaire, on October 30, 1974, 48 years ago today. Foreman entered the fight as the world heavyweight champion, but Ali took the title back from him, to reign as heavyweight champion for the first time since he was exiled from the sport over his refusal to be inducted into the Army during the Vietnam War.

Ali was stripped of the heavyweight title in 1967 and did not fight for nearly four years, before returning in 1971 only to lose to heavyweight champion Joe Frazier. Frazier would lose his title to Foreman in 1973. After Ali won a rematch with Frazier, he challenged Foreman in 1974. When the two fought, Foreman was 25 and Ali was 32; Foreman had also defeated both Frazier and Ken Norton, the only two fighters who had beaten Ali up to that point.

In a series of events that very much anticipated Saudi Arabia’s modern-day forays into golf and pro wrestling, Zaire’s director Mobutu Sese Seko teamed up with Don King to persuade the two fighters to fight in his country. It took place on the 20th of May Stadium; if a stadium in a foreign country is named after a date, it’s usually the date of a coup.

The fight itself is legendary for many reasons. It had a months-long buildup, including both fighters training in Africa and even a massive music festival. The fight was delayed more than a month from its original September date to the end of October. And it was attended by around 60,000 people.

As for the fight itself, Ali introduced what’s known as the rope-a-dope strategy, in which Ali would rest and lean on the ropes and let Foreman punch him, before eventually going on offense. The strategy succeeded, as Foreman was quickly tired out. Ultimately, Ali knocked out Foreman at the end of the eighth round.

The Rumble in the Jungle was shown on TV regularly for much of the late 1970s and the early 1980s. But its legend was specially made by two different of the many Muhammad Ali movies.

The first was 1996’s When We Were Kings, by documentarian Leon Gast. It was mostly built from footage shot before, during, and after the fight, but it took more than two decades to reach the screen. But once it did, the film received massive acclaim and won that year’s Oscar for Best Documentary. Following Gast’s grateful acceptance speech that night, Ali and Foreman came to the stage together.

That award was presented by Will Smith (along with his Men in Black co-star Tommy Lee Jones.) It was uneventful, by since-established Smith Oscar appearance standards, but it led, five years later, to Smith playing The Greatest in Michael Mann’s 2001 film Ali.

That film’s entire third act consisted of the lead-up to the Rumble in the Jungle, leading into the fight itself, as Mann and his collaborators clearly saw that as a natural climactic point.

There’s never been a fight quite like the Rumble in the Jungle, and while it wasn’t Ali’s last great fight, it was certainly his most significant.