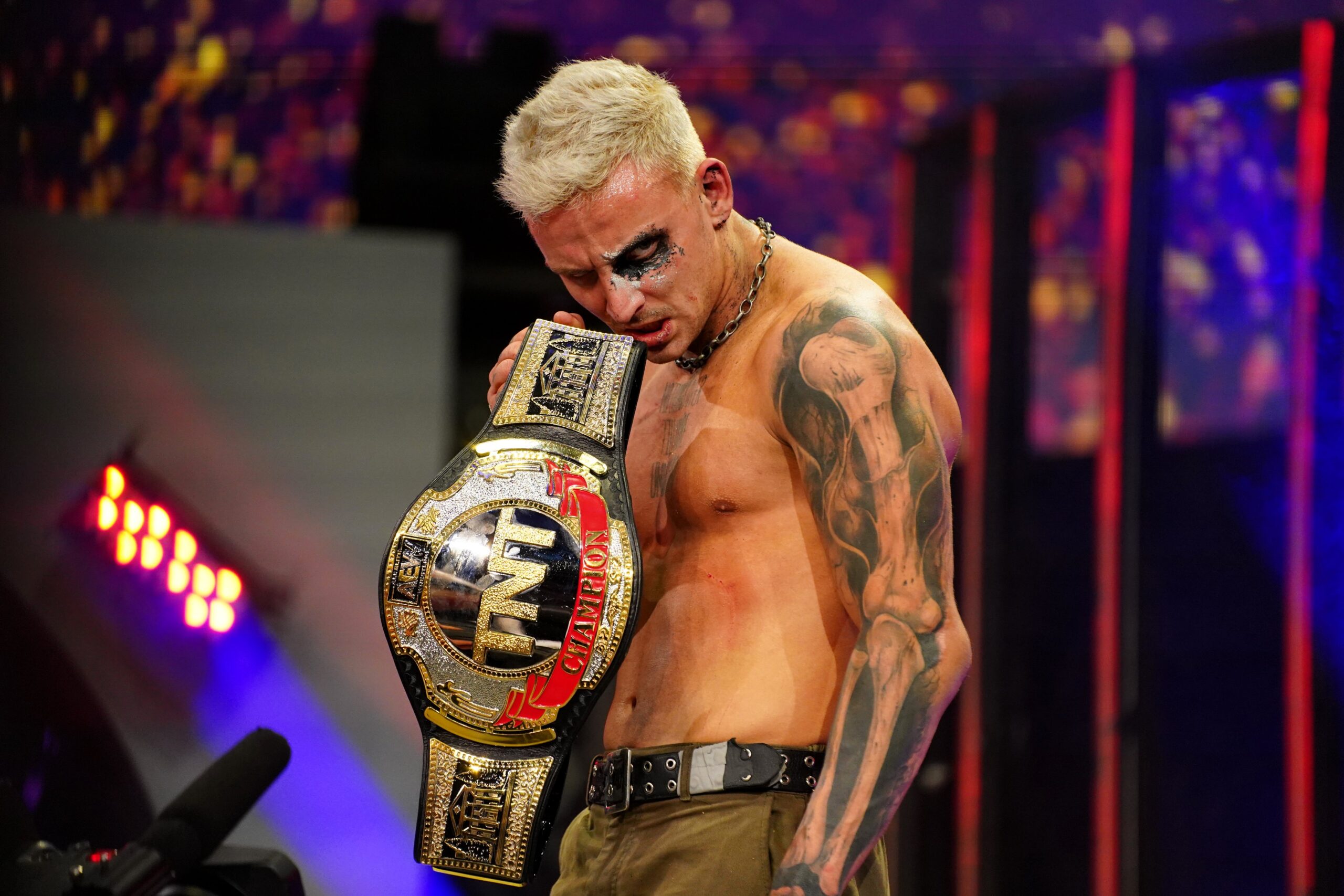 Darby Allin’s run with the AEW TNT Championship came to a predictable end at the hands of Miro on the recent episode of AEW Dynamite -May 12th, 2021. While, admittedly, AEW hasn’t been around for the longest time, they have at least had a good selection of prestigious champions in that time.

Even with the likes of Jericho’s inaugural World Championship run, Page and Omega’s fan-favourite Tag-Title reign, and Shida’s record-holding rule over the Women’s belts, it can’t be understated how good Darby Allin’s turn with the gold really was. So let’s look at why.

After taking the title from Cody in November of 2020, Darby’s reign got off to a slow start. He spent the first couple of months in a tag-team feud against Team Taz alongside the aforementioned Cody, which was fine. It was after his first title defense against Brian Cage of Team Taz that things started to get interesting -and by interesting, I mean something actually happened. So not the best start, but it really kicked up a gear after that defense.

Ok, so on the face of it, Darby Allin’s title matches haven’t exactly been against AEW’s best and brightest. While there’s nothing inherently wrong with the likes of Joey Janela, Scorpio Sky, John Silver, JD Drake, and Ten, they aren’t exactly the pinnacle of AEW -pun definitely intended. Though, to be fair, Darby has also defended against more credible threats like Matt Hardy and Jungle Boy, which definitely boosts his credibility somewhat. The thing is, that doesn’t matter. The caliber of competition isn’t why Darby Allin’s reign has been so good.

Why Was It Good?

This is going to sound silly at first, but let’s compare Darby Allin to Brock Lesnar’s Royal Rumble 2020 appearance -bet you didn’t expect to be reading that now, did you? It was the match where Lesnar entered at number one and spent a good long while dominating every other entrant. In doing so, every wrestler who entered the match -regardless of who it was- made you interested to see what was going to happen to them. You wanted to know what was going to happen to John Morrison, Erick Rowan, Robert Roode. Darby does exactly that, but in the complete opposite way, if that makes sense.

As he’s quite small and incredible at taking bumps, everyone who he comes up against ends up looking like they just might do it, like they’re a threat. Darby manages to make any wrestler seem more important than they actually are, he’s just that good.

While Jon Moxley’s world title reign was fun, it was rare to believe he’d lose the thing during his numerous defenses. That’s why Darby works well, because he always makes it look like he could really lose it. It’s not even like Darby has been booked to look weak, quite the opposite in fact. Rather it’s down to his character trait of always getting back up no matter what that makes him believable and, in turn, makes his opponents more interesting. The embodiment of the phrase ‘Never Give Up!’ -though a certain neon-shirt-wearing wrestler may have got to that moniker first.

Long story short my shoulder is fucked but If I got till Wednesday to get my shit together I’ll do just that. pic.twitter.com/sA40OAu3c8

Where Do Darby & The Title Go From Here?

Now that the belt has been pried away from ‘Sting Junior’ and into the hands of Miro, it’s just a question of how long he’s going to hold it. You’ve got to think that now Miro is being booked as a dominant force that it’s going to continue as such. It’s all down to how much investment they’re wanting to put into the guy. Though it seemed like it’d be that way with Lance Archer when he got to AEW, but that hasn’t really worked out too well, has it?

The TNT Title has been at its best when used to elevate mid-card talent. Cody did it well with the open challenge and Darby was excellent at it by just being Darby. Here lies the problem though for Miro. A long reign as a dominant champion doing squash matches isn’t going to be very fun. So, as both a prediction and a bit of fantasy booking, let’s say Miro loses the strap after a couple of months to someone who’ll be able to make up-and-comers look good. Maybe Christian Cage? He’s quite good at eking out a win in a good match.

As for Darby? The time may not be right for him to enter the World Championship picture. So, why not make use of Sting and have them go for the tag belts? After all, all he’s doing at the minute is standing around looking a bit menacing. It’s not like he’d have to do anything either. Just let Darby take all the punishment early on and have Sting as the hot tag. Having a pair that’s so over with the AEW faithful beating the unbearable Young Bucks would make for a memorable pop when the crowds come back properly. Also, if you had it on the same pay-per-view as Hangman Page pinning Omega for the title it’d likely be one of the most loved events in wrestling history. Screw it, while we’re at it let’s give Orange Cassidy the TNT Championship and Kris Statlander the Women’s belt. Now that’s fantasy booking.

Is AEW Dynamite Too Stacked Lately?