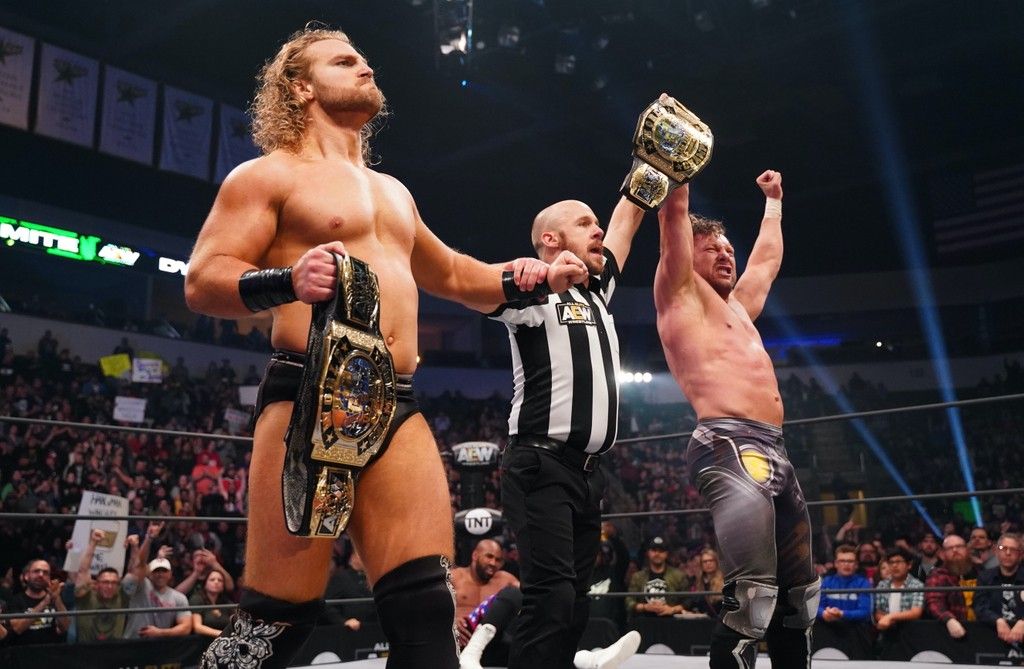 2020 was a difficult year, to say the least. The COVID-19 pandemic robbed the world of any semblance of normalcy and because of this, wrestling shows were void of an audience for most of the year. Yet despite the many problems that arose in 2020, AEW managed to string together four successful pay-per-view events— including two of the company’s best yet— and thanks to the dedication and hard work of AEW, there has been no shortage of entertainment for its fans. What follows is a list of my five favourite pay-per-view matches of 2020 along with one special mention.

Editor’s Note: This is the second half of an article listing the 20 best AEW matches of 2020.

The two young stars I’ve praised the most since AEW debuted in 2019 is Malcolm Jacob Friedman and Jack Perry. For a company bursting with young talent, MJG and Jungle boy are the two men I believe the company can center its future around. Every time they step into the ring, it feels like the early work of a future world title feud.

This marked the second time both wrestlers faced off, and it was a vast improvement from their previous bout in February with both men showcasing their talent in and out of the ring. There is no denying these two have great chemistry, but it’s especially impressive considering how young they are.

This match is well-paced and features plenty of highlights including a killer Canadian Destroyer, a scary Reverse Rana on the apron, a surprising Powerbomb from the second rope, and plenty of near falls. This is a prime example of great booking, with Jungle Boy nearly winning several times until MJF found a way to get it done via a series of reverse pins. A great match with amazing psychology and storytelling, and a showcase for the future!

5. Orange Cassidy vs PAC
How Fun Was This Match?

Love him or hate him, Orange Cassidy is one of the most popular wrestlers in AEW and his match at Revolution proved just how popular he really is.

His match with PAC arguably got the loudest and best a reaction from the crowd that night, thanks to Cassidy’s hilarious antics and the genius booking.

This might not have been the best match from Revolution, but it was hands-down my favourite for how entertaining it was from start to finish. Obviously, nobody was expecting Cassidy to win but it showed he’s indeed a quality competitor with a fresh gimmick— and sometimes, that’s all you need.

Yes, he’s skinny, and sure he won’t ever likely compete for the top title but I can easily see him being a future TNT champ. As it stands, it was a coming-out match for the young star who put to rest any doubts about his in-ring abilities as a wrestler.

Full Gear gave Darby Allin the biggest match of his career when he challenged Cody Rhodes for the TNT Championship. Rhodes may have been in full control, dominating most of the match with both power and technique, but it was Allin who stole the show, taking advantage of his speed and eventually stealing the win with an unexpected quick roll-up. The two biggest highlights here was watching Cody Rhodes hit a Cross Rhodes from the top rope and watching Darby Allin hold back the tears as Cody handed over the title.

3. The Inner Circle Vs. The Elite
Stadium Stampede

I’m not usually a fan of cinematic wrestling matches but the Stadium Stampede is without a doubt the highlight of Double or Nothing and a fantastic way to end the show.

On paper, this match shouldn’t work but thankfully it does. Every gag perfectly plays into the gimmick and every set-piece raises the bar. There’s action. There’s suspense. There’s slapstick comedy, and there’s drama. This match is ludicrous, to say the least – a completely ridiculous brawl that features plenty of highlights such as Matt Jackson suplexing Sammy Guevara 100 yards and Hangman Adam Page chasing Sammy while riding on a horse. I love every second of it, especially Chris Jericho challenging a pinfall and asking for a replay and Hangman using the line marker over Jericho to determine a first down. There are plenty of other memorable moments such as Hangman sharing a drink with Hager before brawling, a Shooting Star Press off the goal post, and Kenny Omega spiking Guevara with the One-Winged Angel for the win.

At Full Gear, fans were finally treated to a dream match between The Young Bucks and FTR. It was a match that had been in the making for years and it was no doubt, the most anticipated match of 2020. The hype was almost insurmountable as both teams were determined to exceed the expectations of fans. Thankfully, they succeeded and delivered one of the greatest performances of their respective careers.

This entire match feels like a love letter to the history of tag team wrestling, with both teams using signature moves from other popular tag teams from the past such as the Steiner Brothers, the Hardy Boyz, the Dudley Boyz, the Hart Foundation, D.I.Y., and so much more. From the moment it starts to the final bell, this match is packed with non-stop action, clever spots, high flying maneuvers, and some really good storytelling.

The climax is also very impressive, as an injured Matt Jackson finds himself at the mercy of Cash Wheeler who could have and should have pinned the young buck, only he felt the need to attempt a 450 Splash which Jackson was able to counter before landing a Superkick that won the Young Bucks their coveted AEW Tag Team Titles. It wasn’t the best match of the year, but it sure was close.

Straight off the heels of his outstanding iron man match with Pac, Kenny Omega once again proved why so many fans consider him one of the best wrestlers working today. He might not have had the biggest moments in this match, but because he was torn between his three friends, I’d argue he was the maestro and mastermind behind almost every decision, spot and action happening in the ring.

This match is nothing short of astounding with way too many highlights to list, but I should quickly mention a few:

Despite his injured back, Matt Jackson landed a double northern lights suplex on Omega and Adam Page. Not too long after, Nick Jackson pretty much stole the show with a series of high-flying offensive attacks, culminating with him placing Hangman Page in a Sharpshooter. In my favourite spot, Hangman Page transformed into a one-man wrecking crew; climbed the top ropes, performed a somersault and came crashing down on the Young Bucks outside the ring. At one point, Matt Jackson hit three straight bridge suplexes on Adam Page and shortly after, Page powerbombed Nick through the table. And let’s not forgot the moment when Adam Page locked the chicken wing on Matt Jackson who then reversed and moved out of the way just in time for his brother Nick to land a 450 splash on The Hangman.

Sure, there were plenty of big moves and maybe one too many near-falls after a finisher (I really hated watching Kenny Omega kick out after three superkicks)— but a big reason for its success is the storytelling these four men were able to implement into the match thanks to Adam Page being gradually more irritated with the cocky attitude of the Young Bucks and Kenny Omega desperately trying to play the voice of reason. After seeing Adam Page spit in Matt Jackson’s face, I was convinced right then and there that all Hell would break loose and these men would become the worst of enemies before they left— but as per usual, AEW pulled the rug from under our feet and gave us a completely different finish.

That aside, I think it’s safe to say that this is one of the five best matches in AEW history so far.

The Best AEW Matches Part One: Best Dynamite Matches of 2020