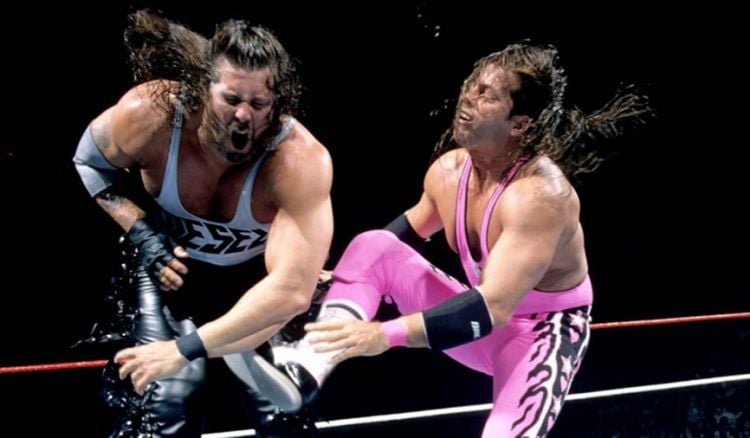 Bret Hart and Diesel’s match at Survivor Series 1995 is notable for many reasons. Hart had his hands full battling the 6 ft 10, 328-pound Kevin Nash and doing everything in his power to win the WWE Championship in a No Disqualification match. About halfway through the intense battle, Brett found himself on the outside of the ring, holding onto the top rope when Kevin Nash slammed into Hart full-force and sent him flying through the Spanish announce table. It wasn’t the first time a Superstar busted through a table in WWE (that honor goes to Harley Race), but it was the first time the Spanish announce table was destroyed and the first time a wrestler went through a table during a pay per view live event.

There have been countless times since that the Spanish announce table has broken under the weight of a WWE wrestler, but this was the first and fans at the time had no idea how to react. In fact, if you watch the match, you’ll notice dozens of terrified kids running towards the barriers to see if Bret Hart was still alive. Nowadays, it’s expected that at one point during a pay per view, someone will crash into the announce table(s) but back in 1995, it was all everyone spoke about the following day.

The match itself was a huge hit thanks to Brett’s ability to grapple with the big man and wear him down by attacking his knee and Diesel’s cool-as-fuck attitude that made it seem as if he was always in control, even when he was limping. Bret Hart called himself the best there is, the best there was and the best there ever will be, because he believed it and more importantly, he made fans believe it as well. Diesel was bigger and stronger, but Bret Hart was so skillful in the ring, it seemed like he could beat everyone. The mix of brawling and technical wrestling between the two superstars produced one of Bret’s self-proclaimed favorite matches of his career. In the end, Diesel attempted a jackknife before Hart countered and pulled him in for a small package to win the WWE Championship.

Big Daddy Cool’s nearly year-long reign came to an end, and he wasn’t happy with the results. After his loss, the big man proceeded to jackknife Bret Hart, not once but twice and continued to attack The Hitman until several referees were called out to break up the fight. When it was all said and done, Diesel turned heel and remained the villain for the next few months—facing off against The Undertaker at WrestleMania XII before jumping ship to WCW.