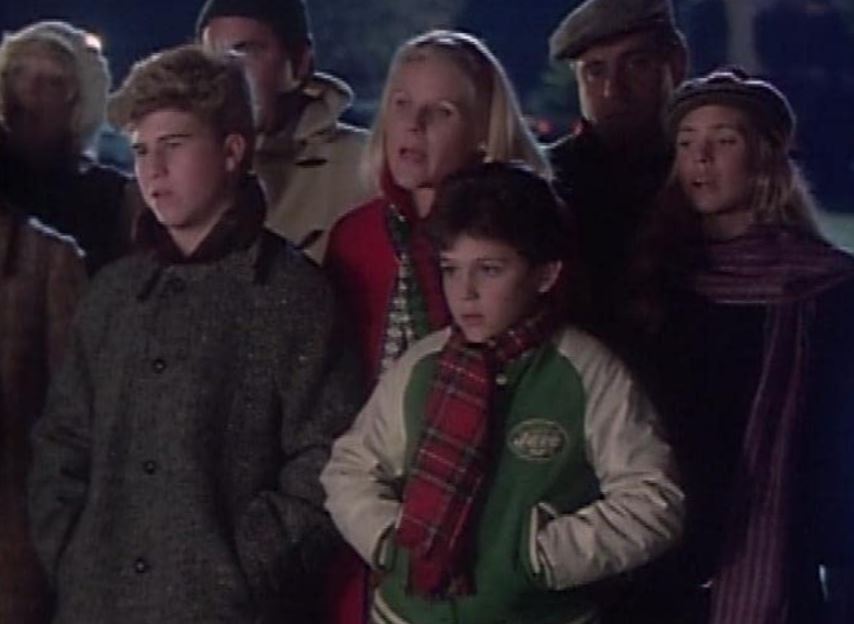 Join us as we spend the next 25 days writing about some of our favourite Holiday TV specials! Today, we look back at The Wonder Years.

It was Christmas in 1968, and Kevin and his brother Wayne fell in love… with colour TV. It was more than love, it was lust. They were witnessing it as a modern miracle, and it was the first time the two boys agreed on liking the same thing. As they set out and try to convince their dad Jack to buy a new idiot box for the family on Christmas, Kevin tries to find the perfect present for his dream girl Winnie after she unexpectedly gives him a present at school. In the end, the family doesn’t get the TV, but Kevin does learn the valuable lesson that Christmas is about more than just presents. It is about family and friends, memories, and those very special moments you share.

For the unfamiliar, The Wonder Years is often cited as one of the greatest half-hour American drama series ever produced. Created by husband-and-wife producers Carol Black and Neal Marlens, The Wonder Years ran for six seasons on ABC from 1988 through 1993, and ranked as one of the most-watched shows on television during that time. After only six episodes aired, The Wonder Years won an Emmy for best comedy series, Fred Savage became the youngest actor ever nominated as a lead, and the series also grabbed a Peabody Award for achieving two seemingly contradictory effects: “evoking a traditional family sitcom while pushing boundaries and using new modes of storytelling”.

While the Christmas episode titled “Christmas” pales in comparison to some of the series’ best (such as “My Father’s Office”), this episode runs with the charm that made the show a success in the first place: it takes everyday slice-of-life incidents and brings it to the small screen with warmth and sincerity. Everything rings true to reality and nothing is ever exaggerated for a quick, cheap laugh. Not much happens in “Christmas” outside of the family’s desperate attempt to convince their father to buy them a colour TV, but as with most episodes of the Wonder Years, a significant part of the episode’s appeal emanates from Kevin’s infatuation with Winnie Cooper. Seeing him so desperately trying to find her the perfect perfume as a gift and in the end, settling for a snowglobe is utterly adorable.

As great as Kevin is, the standout moments in “Christmas” all come from Jack, a tough-as-nails dad, who every once in a while opens up to reveal his love for his kids. The holidays can be an especially tough time for any parent, particularly those who try their hardest to make their children happy. Not everyone is blessed with the finances to go out and purchase a television priced at $469. In a way, Jack is the complete opposite of Scrooge, as pointed out by Kevin. We see him grumble about and bargain with the cost of just about everything, but it’s not that Jack cares about money, he just can’t afford to be irresponsible with what he does with that money.

David Stern’s narration gave The Wonder Years a unique feel and rhythm and a clearer look at life through the eyes of a 12-year-old boy. His narration usually offers the biggest laugh, but the funniest moment in this episode actually comes from Karen, Kevin’s sister, who tells him: “You’re backing dad in to a corner. He wants to buy a TV, but he wants to surprise us. It’s complicated.”

Few series have been able to capture the pain and triumphs of adolescence as The Wonder Years. Their first Christmas special pulls off the neat trick of affirming that money can’t buy happiness while serving up enough tender moments to recommend it highly. It’s expertly directed, emotionally engaging, warm, funny and manages to be sweet without getting sticky. As the family gathers in the final scene to sing Christmas carols, we are teased with a glimpse of the first snowfall. Thankfully for the Arnolds, it started to pour instead, and somehow under the rain, the Arnold family rediscovered the true spirit of Christmas. And as we learn before the credit roll, Jack does buy the family a television set, after all, only it came two years later.

100 % – The entire episode takes place during the Christmas holiday and features the following songs:

Anyone who likes comedy-dramas and good TV writing.

The final narration of the series beautifully summed up the experience that was The Wonder Years: