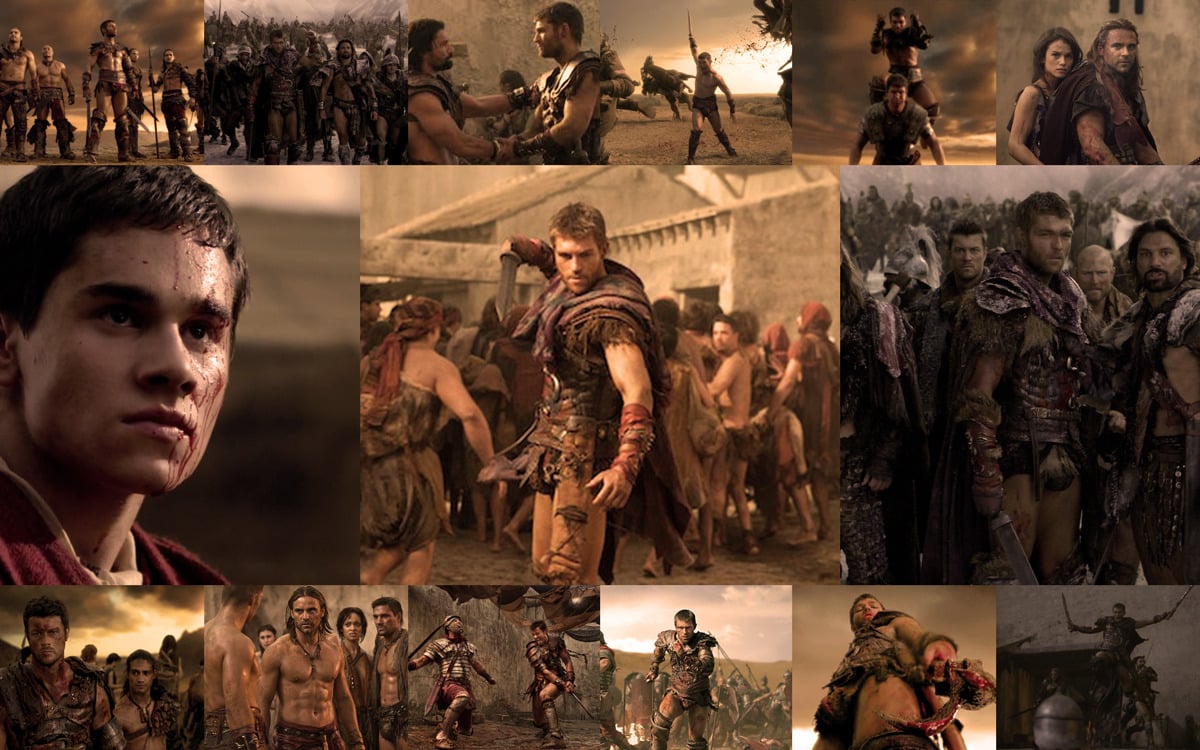 In 2013 Spartacus: War of the Damned ended its run on Starz, concluding the overall series run for good after only 39 episodes, a decision made deliberately by showrunner Steven S. DeKnight and company. The finale, “Victory,” concluded a series that overcame unbelievable obstacles only to become one of the best TV shows of the decade, and one of the most purely entertaining ever made – a journey worthy of a gladiator. Yet few dare to utter its name in the hallowed company of the likes of Breaking Bad, Justified, Mad Men, etc. And it’s a damned shame.

When Spartacus premiered (with its first-season subheading  Blood and Sand; its graphic-novel style structure points to a clear way forward for the creatively embattled likes of The Walking Dead), hardly a soul took it seriously. The first sentence of Todd VanDerWerff’s review of the series premiere over at The Onion AV Club: “[It] feels like it was committee designed by a large group of 14-year-old boys with one gay friend.” It’s hard to blame VanDerWerff and most of his colleagues. Filled to the brim with blood, gore and equal-opportunity nudity and sex scenes, Spartacus might well have ended up as a shallow exercise in excess and nothing more, fit for VanDerWerff’s dismissal. It didn’t help that it was airing on Starz, whose track record for original series was (and remains) less than spotless. But over its four seasons (including the truncated prequel season, Gods of the Arena), Spartacus has merged spectacle with emotional resonance and even political import to a degree that perhaps nothing else in present existence can match. And it’s all due to the tenacity, persistence and creativity of DeKnight and his collaborators, who have proven once again that sometimes the greatest art is produced under intense restriction.

In March of 2010, star Andy Whitfield, who played the titular hero, was diagnosed with non-Hodgkin lymphoma. (Pause for a moment and wonder what Mad Men, Breaking Bad or Justified might look like now, had one of their principals suffered the same fate.) When it became clear that Whitfield would, at the very least, be unable to participate for a significant period of time (having already delayed the filming of the second season), DeKnight and company conceived and wrote Gods of the Arena, a prequel series focusing on some of the supporting players surrounding Spartacus (Gannicus, Onoemaus, Crixus, Batiatus) as a sort of stopgap while they waited to see if Whitfield’s condition might improve. In retrospect, it was a stroke of genius. Where more timid showrunners might simply have taken the year off (or recast at their nearest convenience), DeKnight forged a solution that managed to enrich his series’ universe while honouring his leading man. (Whitfield beat the initial diagnosis, but quickly relapsed and ultimately died in September of 2011. Whitfield was 39 and the image of health; a stern reminder that cancer does not discriminate.)

With what must have been heavy hearts, DeKnight and his team recast Aussie Liam McIntyre as Spartacus. Looking back on the history of Spartacus, the recasting of the central role is strangely appropriate. McIntyre couldn’t hope to match Whitfield’s physical presence, which crowded the frame in a physically imposing fashion. Comparatively, he’s a literal lightweight, yet there’s an underdog quality to McIntyre that suits the very nature of the Spartacus story. After all, Spartacus has come to embody the very notion of taking arms against an unbeatable foe, an empire too strong and too vast to be truly vanquished at once. While he may have strained credibility as a warrior fit enough to take down the legions of Rome, McIntyre has brought a quiet gravitas to the role suited to a figure the powers-that-be would underestimate.

Some Legends are Written in Blood

On the broader point of what separates Spartacus from other series: shows like Mad Men find acclaim (and rightfully so) in submerging pet themes in allusion, cloaked exchanges of dialogue, nuanced performances, and retrospective insight. Spartacus takes a more direct route, one we’re unaccustomed to seeing in truly great television. The universally-accepted “great series” – think The Sopranos, The Wire, Deadwood – have cerebral forms and dialogue to match their thematically rich content. In a way, Spartacus has accomplished something much trickier. With its elongated scenes of sexual congress and bloody battle, not to mention its syntactically precise dialogue, Spartacus has carefully developed a televisual universe that allows viewers to enjoy the thoroughly debased content while subtly insinuating much more insidious themes and ideas under the guise of base entertainment. It’s a perfect melding of “low” and “high” television, one that doesn’t stop to care if you fully appreciate what it’s up to or not.

A perfect example has recently arisen in the form of the series’ penultimate episode, “The Dead and the Dying.” (From here on in, I will divulge details that are technically “spoilers,” but those don’t really exist in the context of a series wherein most, if not all, of its outcomes have already been written by history.) In this episode, Spartacus stages a recreation of the Roman gladiatorial arenas in which he and many of his most hallowed allies honed their skills as peerless warriors. Where they once toiled for subjugated glory while under Roman heel, they know slaughter clearly inferior Roman foes while a crowd of former slaves cheers on. Absolutely no one within the context of the show points it out, but there’s a clear dramatic irony at work here: so near the end of their journey, the rebel slaves have literally become what they railed against in hopes of freedom. It’s a testament to the intelligence of DeKnight and his writing team that not a single one of these former slaves – who would naturally thirst for vengeance against their former captors – ever raises voice against these makeshift contests. Why would they? They’ve spent entire lives as Roman subjects, deemed less than fully human. Yet it provokes in the viewer a clear sense of profound cognitive dissonance. That, in a nutshell, is the image of the storyteller who has faith in their viewers.

The biggest obstacle keeping Spartacus from mainstream respectability, even more than its hyper-stylized, comic-book-style violence, has always been its depiction of sex. On Spartacus, the ultimate act of intimacy is not something to be cloaked in innuendo, or to be cut away from at the moment before its subjects discard their pesky garments, but instead something to be reveled in, with slo-mo and careful lighting to boot. Without exception (or at least none that spring to mind), every single episode of Spartacus prominently showcases at least one sex scene, featuring full-frontal nudity from particularly sculpted members of one or both sexes. I would maintain that with the exception of a few superfluous such sequences (such as the one that graces “The Dead and the Dying,” featuring Caesar and one of his favourite prostitutes), the depictions of sexual congress on Spartacus are appropriate and contextually cohesive with the excesses of the rest of the series. They serve to underline the more, shall we say, naturalistic measures and methods of trade and inspiration relative to the time period, not to mention acting as a reflection of the invariably liberal sexual mores. (Witness the love shared by Agron and Nasir, and note with admiration how none within their hallowed company rings out a single note of displeasure, or even notice. That’s period-appropriate, sure, but it also signals us towards a more accepting moment in our shared future.) On the other, they serve to unite the characters of Spartacus, be they Roman top brass, slavers, slaves, or rebels.

After all, when the long-departed Batiatus (the fantastic John Hannah) joins in carefully choreographed sex with his wife Lucretia (Lucy Lawless), they see their slaves only as pawns towards their own future gain; they couldn’t possibly anticipate that these self-same slaves will be directly responsible for their ultimate demise, thanks to their careful nurturing of the same. It’s easy to imagine the rulers of second-century Rome being similarly complacent. But by offering Batiatus a showcase in the form of Gods of the Arena – whether accidentally or otherwise – DeKnight formed a radically humanist framework that Spartacus has followed ever since. We know from history (which Spartacus has followed closely, if not always with total precision) that Crassus (the natural antagonist of War of the Damned, played by Simon Merrells) will ultimately defeat Spartacus’s rebel army and end the Third Servile War decisively. Yet, with rare exception, Spartacus doesn’t treat him as an inhuman monster, but instead a shrewd tactician who is able to match and ultimately best Spartacus by respecting his foe and recognizing that the traditionally accepted notions of Roman superiority over their subjects may no longer apply. It’s the most beautiful dramatic irony of War of the Damned: it’s only by accepting the central tenets of Spartacus’s rebellion that Crassus is able to quell the insurgency at all. Even in victory, Crassus has, in an important sense, already lost.

None of these thematic undercurrents fully explain what makes Spartacus such bloody entertaining television. A huge part of the fun to be had is in the dialogue. Frequent viewers of Spartacus will be able to parrot lines and mimic the mannered syntax with glee, but what DeKnight has accomplished is deceptively difficult to pull off. The very nature of Spartacus implies artifice – after all, we’re watching Roman characters speaking English in mostly-British accents – so DeKnight and company took the boldest course possible and invented their own dialogue rhythms out of whole cloth. The resulting, carefully calculated blend of vulgarity, flowery phrasings, and broad use of allusion and metaphor makes for the most distinctive dialogue patterns since Deadwood.

And then there’s the action. Spartacus owes much, visually, to Zach Snyder’s 300, which made similarly liberal use of ultraviolence, slo-mo, and green-screen expanses. Thankfully, Spartacus retains none of that film’s implicit sense of homo- or xenophobia, instead choosing to respect its characters’ emotional realities and never judge them for their decisions or appetites. In the context of Spartacus, there is no such thing as a “guilty pleasure.” Thus, the aesthetic indulgences just seem part and parcel. It can be aesthetically disorienting at first, but given a bit of time (and perhaps the aid of marathon viewing), the style actually becomes totally immersive.

But even if all that excess, those gallons of digital bodily fluid, those vulgar/poetic blasts of exhortation, leave you entirely cold, there’s one level on which DeKnight and company are to be unequivocally celebrated. “Victory,” which aired April 12, 2013, marked the unambiguous end of War of the Damned, and Spartacus in general. Each season – or series – has served a specific purpose in the greater narrative of Spartacus and his allies (and enemies), and now the story meets its natural end. In forcing a relatively early end-date, DeKnight honours the natural contours of his story, rather than trying to milk it for as much content as possible. How many showrunners have let their series run a season, or two, or more, too long, just to drag too-willing viewers through substandard storylines?

There’s ample reason to believe that DeKnight, at this point a television veteran, is one of the shrewdest and most canny showrunners around, and deserving of viewers’ trust in delivering an appropriate capper to one of the most epic journeys ever portrayed on television.

Classic TV Crossovers That Could Have Been Amazing