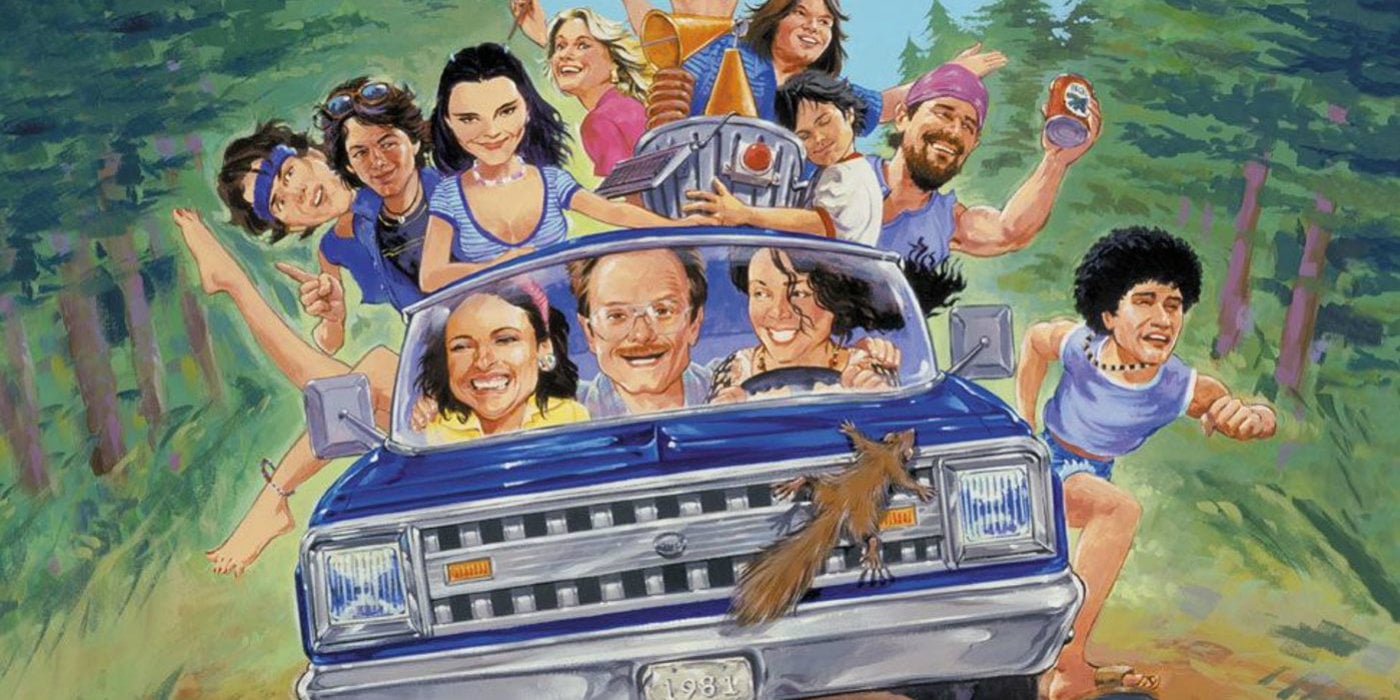 When Wet Hot American Summer was released in 2001, it was poorly received by critics and flopped at the box office, but thanks to DVD rentals it garnered a huge cult following in the wake of its failure. The affectionate send-up of ’80s summer camp romps like Meatballs and Porky’s was the brainchild of David Wain, who first cut his teeth on The State, a scattershot mid-90’s sketch show that lasted 26 episodes on MTV. It was Wain’s first film, and it featured an excellent cast of relatively unknown actors at the time, which included Molly Shannon, Paul Rudd, Bradley Cooper, and Amy Poehler, to name a few. Considered by many to be the first “great” American comedy of the 21st century, it’s hard to understand why it wasn’t well received at the time. Wet Hot American Summer may be idiotic and ridiculous, but it’s also completely brilliant in how it deconstructs popular storytelling in Hollywood teen movies while embracing the stereotypical atmosphere and daily routines of sleep-away summer camps.

Wet Hot American Summer: First Day of Camp is the prequel to Wain’s cult classic, and like the movie, the show has a similarly loose, improvisational air that draws heavily on sketch comedy. The series of eight episodes (which together make for just four hours of television) takes us back to the first day of camp. Kicking off at 7:45 a.m. on June 21, 1981, the first season takes place over the course of one day. The overall plot hinges on the financial ruin of Camp Firewood thanks to the camp’s director, who makes a deal with a toxic waste company. But the vast majority of storylines primarily focus on the minutiae of summer work, and the awkwardness of new friendships and fresh romances: Heartthrob Andy (Paul Rudd) is trying to win over Katie (Marguerite Moreau) from her current undeserving, uptight, yuppie boyfriend Blake (Josh Charles). Meanwhile, Kevin (David Bloom) is having trouble with his first summer romance with Amy (Hailey Sole), and counselor Alan (Showalter) is having trouble with his girlfriend Donna (Lake Bell). Elsewhere, Susie and Ben (Amy Poehler and Bradley Cooper) are producing a stage play (Electro City) with help from pompous stage director Claude Dumet (John Slattery) who has a thing for Susie, while Ben comes to terms with his sexuality. You see where this is going? It’s the first morning at Camp Firewood, and the horny counselors are already making their moves. 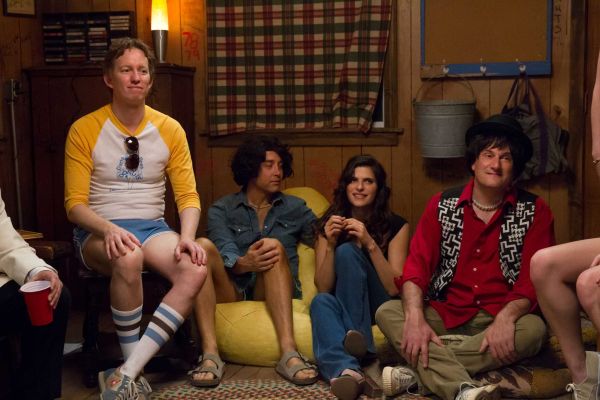 Where the series differentiates itself from its predecessor is in its additional intersecting plots, which have been carefully crafted to tie into the events of the film. With more real estate to tell their story, Showalter and Wain spoof almost every sub-genre imaginable. Elizabeth Banks plays an investigative journalist with a hot scoop, taking notes on a manual typewriter and stumbling upon a dark secret residing somewhere in the woods. The most hilarious of plot threads involves the Vietnam-scarred Gene (Christopher Meloni), who’s getting ready for his wedding day, and Jon Hamm as a government assassin (yes, there are three Mad Men alums in this show, with Rich Sommer playing one of Blake’s friends). There’s just so much going on and too much to mention, including government conspiracies, secret identities, a professional production of a Broadway musical, and even a nod to cross-dressing comedies (arguably the funniest scene in the season). First Day of Camp isn’t just a parody of the ’70s and ’80s teen sex movies—it’s conspiracy thriller, romantic comedy, courtroom procedural, and Toxic Avenger rolled into one. The additional subplots inevitably sway the series away from the overall tone of the movie, but First Day of Camp is without question just as fun and imaginative, if not more.

Anyone who hasn’t seen the film (what are you waiting for?) won’t get the inside jokes and added fan service, but there are enough cameos, gags, and hilarious setups that anyone can enjoy, regardless of your familiarity with the motion picture. The material, however, is clearly much funnier within the context of how it relates to the movie, which is set on the last day of camp, just a few weeks after the events of the series. For those of you familiar with the original source material, the rewards are plentiful: First Day of Camp explains many of the unexplained weird subplots in the film: fans, for instance, will get to see how the talking can of vegetables (H. Jon Benjamin) came alive. First Day of Camp is crammed with so many Easter eggs that the series takes the jokes of the original film and twists them upside down in its own weird, hacky, awkward way to create a new joke. Imagine that: jokes giving birth to gags poking fun at the buffoonery made two decades earlier but taking place 8 weeks in the past of the show’s universe. Does that make any sense? It’s funny because it’s funny, but since comedy is mostly a subjective art form, I can’t guarantee you’ll laugh. But consider this your encouragement to watch the movie immediately before starting the series, because the more knowledge you have of the film, the more resonant the material will be. 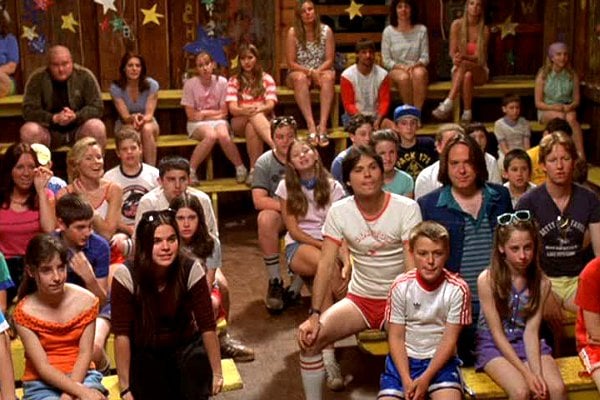 With every line and every gag, First Day of Camp is a brilliant attempt to pick away at the absurdities and inaccuracies of Hollywood’s depictions of sexual relationships, friendships, and dating, while at the same time highlighting the gauche realism of teenage social interactions. The show never shies away from throwing absolute nonsense in whenever it can. And where Wet Hot American Summer asked its viewers to accept that a bunch of 20- and 30-somethings were playing teenagers, First Day Of Camp stretches the metaphoric skin even further by reuniting the original cast of the 2001 cult classic to play even younger versions of these characters. It’s complete madness, but did I mention it is also really funny?

It’s always hard to do a follow up on a cult classic. Remakes, reboots, and re-imaginations are nothing new to Hollywood, but we are living in a time that is arguably giving birth to a record number of decade-old franchises that are dug up and shamelessly reanimated, not to mention numerous other productions trying desperately to cash in on nostalgia while attempting to stand out as original. Wet Hot American Summer: First Day of Camp is arguably no different, but there is something about the series, and its passionate nostalgia for our collective childhood summers, that helps us enjoy it for what it is.

WHAS isn’t afraid to address nostalgic summer camp memories that are, in truth, not always as awesome as we’d like to remember. After all, summer camps are—let’s be honest—strange institutions where parents get a break from caring for their angsty children. In exchange, their offspring are sent to a place with communal sleeping, shared showers, and minimal supervision, often at the hands of slightly older and even hornier youths. This, of course, all adds up to a pressure cooker of hormones, humiliation, awkward fumbling, and humiliating discoveries. Wet Hot American Summer takes the most vivid memories of summer camp and lovingly pokes fun at it in the most outrageous ways possible because summer camp is also pretty absurd. Even if scattershot, the brand of comedy works well in picking apart these absurdities, while at the same time highlighting the bumbling realism of male-female social interactions. In many ways, First Day of Camp actually improves on the movie. Dare I say the show is consistently funnier, weirder and more inventive than the film? Regardless of whether you agree or not, I think it’s safe to say that the material, if anything, seems far better suited to the Netflix TV formula. 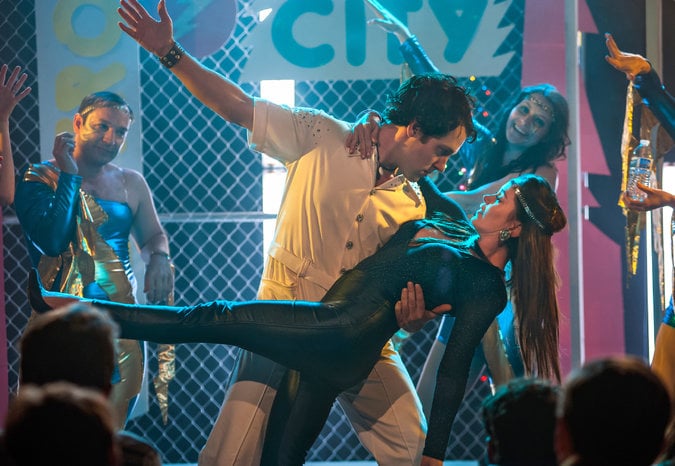 BoJack Horseman’s Child Stars: Where Are They Now?