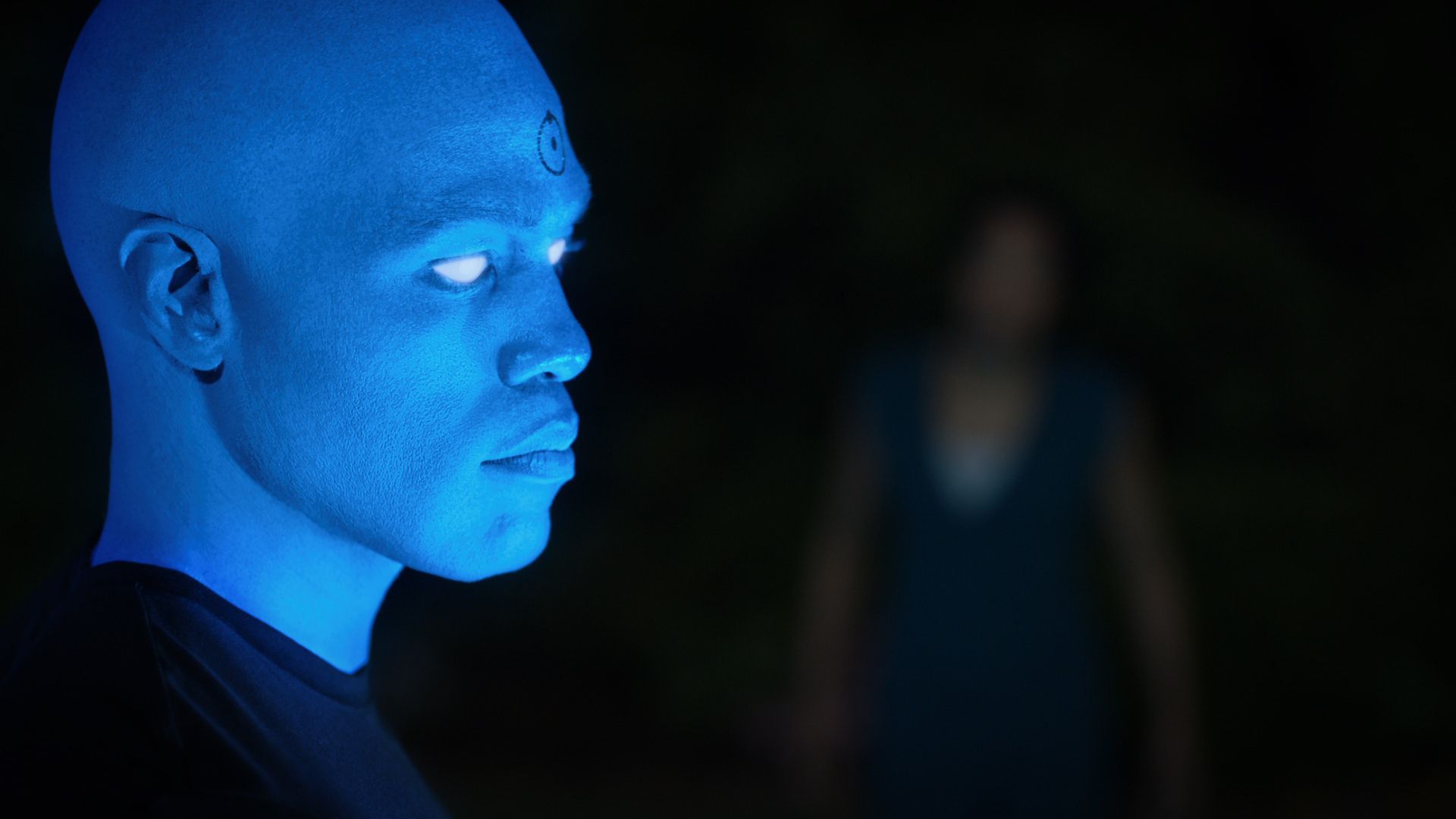 It would be easy to dismiss “See How They Fly,” Watchmen‘s momentous, overstuffed finale, as a rather predictable affair: there’s not much about it all that feels very surprising, a deliberately straightforward march to (mostly) predictable conclusions. But the more I sit with the events surrounding the end of Tulsa’s squid-tastic adventures, the more I appreciate the watch-like construction of the episode: “See How They Fly” is deliberately designed to be predictable, forcing audiences to contend with the thematic and emotional component of the hour, rather than rely on surprise moments to make its Big, Final Proclamations.

Like Trieu examining the legacy of Dr. Manhattan, “See How They Fly” certainly leaves one begging for more.

Instead, “See How They Fly” religiously adheres to its title; every element, from Veidt and his squids, to Dr. Manhattan and even Senator Keene Sr., end up in the same location, and this final hour is more than preoccupied in watching them cross-pollinate, if only for a few moments. Immediately, the earlier pieces of Watchmen‘s narrative construction become clear; from Trieu and the Kavalry’s ironically shared sense of destiny, to Veidt’s escape and Dr. Manhattan’s death, “See How They Fly” doesn’t try to play coy with the path to its final showdown.

Where the joy comes is in the smaller moments: Laurie reacting to seeing Dr. Manhattan, Angela sharing moments with her husband and father, and watching Trieu and Keene both fail miserably in their vein attempts to become gods (Trieu’s sheepish joy at unleashing the Keene-goo pairs beautifully with her “motherfucker” of a final line).

Though it all does feel… a bit too tidy at times, doesn’t it? Considering how often Watchmen shifted tones and perspective through its brief run, it makes sense the finale might be the most direct episode of the series. But there’s still an underwhelming element to how it all plays out in such perfunctory fashion: at its most critical storytelling juncture, Watchmen suddenly backs away from asking questions it doesn’t have explicit answers to. Obliterating the Kavalry’s leadership is a simple answer to a number of questions; but thematically, it feels like it undercuts its own point about how nakedly entrenched white supremacy is, and how little the impact of vaporizing a few dozen supremacists would be on the world.

Another example of this to point to is Lady Trieu, a character who is sketched out, but mostly rests on the fringes until she explodes in exposition during the final 90 minutes of the series: to think we never got a flashback bringing true layers to her unique brand of intelligence, perseverance, and capitalistic drive: instead, she becomes a cipher of science fiction mumbo jumbo, a woman whose ideas work in concept, but don’t feel fully formed in practice.

What we get of Lady Trieu on screen feels like two-thirds of a character; it just so happens that final third, the part watching her unknowingly grow up as the hidden offspring of humanity’s demented savior, is mostly left to the audience’s imagination, and it is the one insistence where Watchmen would’ve benefited from not adopting that approach.

But the strangest of all these is the final moment: Angela’s absorption of her husband’s powers is a decidedly unambiguous final scene, and “See How They Fly” strangely leans into what is a pretty telegraphed conclusion. By focusing on that, however, it ignores some of the more pressing questions about Angela’s arc through the series: if Dr. Manhattan couldn’t put his powers to good use, who says Angela will? Seeing her, Dr. M, and Will contend with that possibility more is a moment I dearly wish “See How They Fly” had; would Will really support the idea of passing down omnipotence to a woman whose lived through so much pain (and in taking Nostalgia, literally inherited his)?

More importantly – would Angela be able to do any more than Dr. Manhattan, once liberated from the mental constraints of her human condition? Or would she just float away to wander in space, selfishly experimenting with the powers of creation, rather than trying to fix the broken world of hate, anger, and love he briefly left behind. Is anyone with power able to create true good in the world, or are the fundamental truths about obtaining power irreversibly corruptible?

It’s not a question of whether Angela deserves the powers or not: it is whether they should exist at all, and what Watchmen is trying to say about Dr. Manhattan, and the transfer of his powers to Angela. Succession and Watchmen both agree that you can’t make an omelette without cracking a few eggs (or Gregs); Watchmen‘s interpretation of that idea by passing Dr. M’s powers to Angela sends a mixed signal about what it wants to say about the ability of endless power, and the near zero-sum game of social progress.

By cutting to black just as those many ideas are crashing together, Watchmen absolves itself of having to provide an answer: but in a series that is so hyper-focused on the relationship between power and morality (and, at the beginning, Angela’s deep-seeded anger), it seems strange Watchmen didn’t even offer a glimpse of how it felt about its final twist.

Oddly enough, “See How They Fly” almost ends up feeling like Veidt’s hour, vanquishing his foes and leaving Mars, finally freed from the prison on Europa by the daughter he’d pledged to never acknowledge. Seeing Veidt come back to a world that had utterly forgotten him finally gave scope to his character’s arc, even if it felt like a bit too little, a bit too late: the second coming of his hubris is a fun journey for him through this episode, but like Lady Trieu’s underdeveloped aura, it felt like this story needed a bit more room.

Despite all these narrative nit pickings, “See How They Fly” is an emotionally powerful series (season?) finale: the heart of its story, the tale of Dr. Manattan and the Abar family, is more than strong enough to conceal some of the blemishes in the hour’s many plot machinations. Dr. Manhattan choosing to exist in every moment he spent with Angela right before his death is the unexpected emotional poignancy, the kind that drove the heart of Watchmen all season.

Even though he was as fucked up a narcissist as Veidt (as Trieu points out, Dr. Manhattan could’ve done so much more for humanity, instead choosing to cower under a psychopath’s murderous conspiracy), watching Dr. M reach the unhappy ending he knew awaited him was powerful. Yahya Abdul-Mateen II and Regina King are absolutely heartbreaking as “See How They Fly” fades away in the background to focus on them, one trying to peacefully let go, while the other begs to fight against the dying of the light.

Like Trieu examining the legacy of Dr. Manhattan, “See How They Fly” certainly leaves one begging for more: more time spent with Trieu developing her plan to save humanity, more time observing Joe Keene Jr.’s machinations to subvert social progress, more time with Laurie, and Looking Glass, and any other half-dozen characters we could’ve spent more quality time with.

However, I view that as a job well done, rather than a completely missed opportunity: no matter what character Watchmen was shining their light on, it always felt like their respective emotional journeys took precedent over what they were literally doing in any given moment (in the ultimate nod to The Leftovers, I suppose). They were written and performed with such depth, such gusto, that I can’t help but want more – and at the same time, I really hope there isn’t an announcement of a season two waiting around the corner.

Ultimately, what makes Watchmen work as a limited series is how open and shut it is: for a story that spans decades of time and stretches halfway across the galaxy, Watchmen‘s story felt contained in a supremely satisfying way. Outside of Trieu and maybe Laurie, there really isn’t a lot more time we’d need to spend with these characters: Angela stepping out into her pool is the perfect final image, because it is the only image of this world we need to see, in order to understand the broad strokes of what happens next. Quite frankly, that story doesn’t seem anywhere as interesting as what happened in these nine hours; I’d rather spend years postulating about what Angela’s tenure as a god meant for her world, than have to sit through an entire series experiencing it.

It all comes back to the idea of a watch, the career Dr. Manhattan’s father chose for his life’s work: it is not in seeing the various pieces of a watch that make it a wondrous marvel of mechanics and technology. Rather, it is seeing all those pieces work in concert, seeing how each cog is neatly placed in its pre-determined position to serve its intended function, where the watch becomes a fascinating piece of equipment; a deserving legacy for one of the era’s most daring, ambitious adaptations, a truly subversive reinterpretation of Watchmen‘s core ideas about America (and its relationship to its own history), superhero media, and the unattainable dream of a true utopia. What a series.

Turns out Red Scare was a big nothing burger of a character, which was a bummer.

Trieu inseminates herself with Veidt’s hidden collection of semen (which… not surprised Veidt would do that, but still weird?), and Angela inherits Dr. M’s powers by drinking the contents of a very special egg. NOTHING TO UNPACK HERE, FOLKS

This episode’s meta-conversation focuses on the idea of “reruns,” embodied by Trieu’s dismissal of Veidt’s auto-programmed attacks as lazy, limited rehashes of his original great idea.

Dr. Manhattan telling Angela he “didn’t want to die alone” was such a touching final moment for him, even if it continues his habit of doing whatever he wants, regardless of the potential human cost (after all, since he couldn’t see after his death, there was no telling his death wouldn’t have led to Angela’s soon after).

Always nice to see a few podcast predictions come true: turns out we were right about Veidt’s letter, and Trieu’s parental lineage, for nobody who is keeping score.

“You can’t heal under a mask,” Will tells Angela. “Wounds need air.”

Keene’s Undies of Supremacy is easily my favorite bit of costuming in the series… well, that and Lube Man (which… if you haven’t read the last Peteypedia entry, you probably should).

Laurie reminds Veidt that people can change… by arresting his ass for the crime she let him get away with 34 years ago. Laurie doesn’t get much to do but react to what’s happening in the finale; seeing her embrace who she’s become is a fun little final moment, though.

Very interesting to see the finale of a comic book series have little to no action in it. Sure, there are a few explosions and a few dozen people vaporized, but there’s a distinct lack of movement occurring in the episode’s many big scenes.

Those poor orphaned kids Angela was taking care of; boy, are they screwed with their adopted father dead, and their adopted mother now a god indifferent to the everyday plight of humanity.

My So-Called Life: “So-Called Angels” is a Timeless Classic