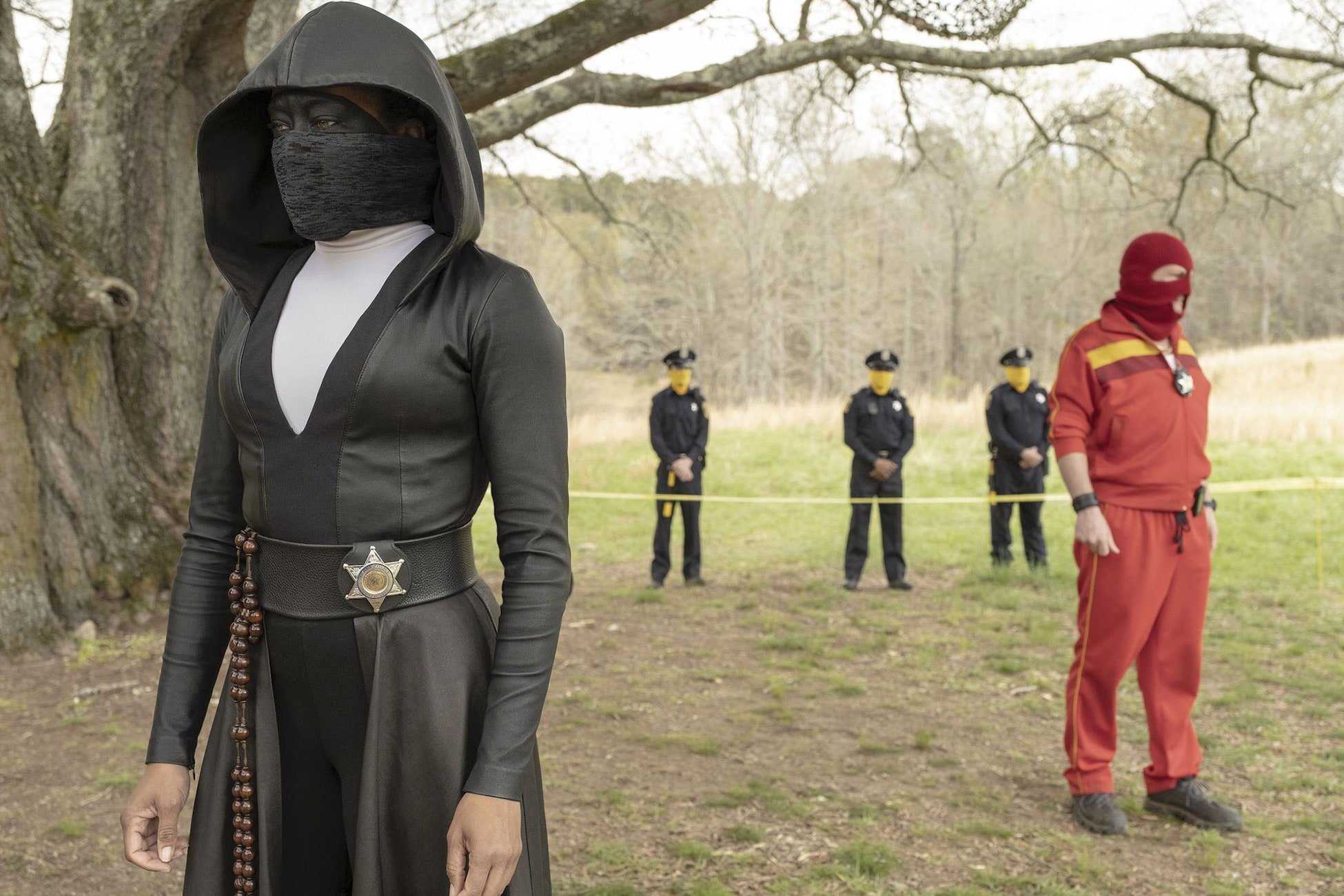 Near the end of “If You Don’t Like My Story, Write Your Own,” trillionaire Lady Trieu accuses Will Reeves of employing “passive-aggressive exposition” and tells him he’s being “too cute by a half-measure” teasing out his identity to his granddaughter. It is one of many meta moments in a Watchmen episode where Damon Lindelof’s anxieties and fears constantly bleed through the text of dystopian superheroes; and while that certainly makes for fascinating television to dissect and theorize about, it doesn’t exactly make for a neat, satisfying hour of television. In fact, much of it feels like its explicitly doubling down on its most esoteric qualities, drowning out much of its interesting character work and world-building, with an ungodly amount of narrative winking and hand gesturing in the place of a coherent, driven plot.

Watchmen‘s density appears to be coming into conflict with its narrative momentum more often than it should, which could prove troublesome in its climactic moments.

It’s not necessarily bad television; but many of the bread crumbs it drops throughout the hour make “If You Don’t Like My Story, Write Your Own” feel both bloated and empty through most of the episode. Even Lady Trieu, whose introduction is unsurprisingly strange and intriguing, falls victim to this by the end of the hour, becoming the author’s overt mouthpiece in perhaps the most strained exchange of the young series. After a fascinating introduction, where she convinces a couple to sell their house and land by bringing them a test tube baby (one she had made from their DNA), Trieu’s later scenes are a bit more grating, the farther they move away from defining her character, and closer to becoming a sounding board for self-critique.

Lady Trieu’s arc through “If You Don’t Like My Story, Write Your Own” is emblematic of the entire hour: rich subtext obfuscated by an unwieldy amount of foreshadowing and stalling. This is obviously by design – Will establishes we’re three days away from whatever event is coming, and Veidt’s timeline reveals his scenes are three years from the present – but instead of leaning on character and theme to pass the time, the fourth episode of Watchmen doubles down on objects nodding towards what’s to come. An object falling from the sky, a mention of a horseshow Veidt “doesn’t need yet,” the direct mention of nothing being able to take down the Milennium Clock, “save for a direct hit from a nuclear blast”; every object and line in “If You Don’t Like My Story, Write Your Own” is a nod towards what’s to come – which, in retrospect, may make this the most important episode of the series.

But in the present, it just makes the whole affair feel a bit clumsy in its deliberate, straightforward delivery; to borrow from the episode’s symbolism, we never see any of the acorns grow into trees in this hour. We learn facts like Looking Glass is a conspiracy theorist, and Trieu’s daughter is probably some kind of lab creation who has her mother’s memories of Vietnam, and Veidt pull babies out of the water to make his clone servants in a steampunk machine; all enthralling imagery, all stepped in some of the show’s deeper thematic material about identity and purpose – but it feels laborious, and hollow, in the isolated context of “If You Don’t Like My Story, Write Your Own.”

At some point, all of this will mean something; even the vigilante who lubes himself up to slide through sewer grates will hold some significance in this world, even if it’s only a cheeky side note across this hour. I just wish I felt more emotional purpose to this episode: in those terms, most of “If You Don’t Like My Story, Write Your Own” is just inert, a middle-chapter episode that makes no qualms about its position as the episode positioned between the series’ beginning, and the start of its climb to the season’s dramatic apex; but that honesty comes at the cost of everything feeling just a bit trite.

The most interesting parts of “If You Don’t Like My Story” end up being in the margins; details like Angela and Lady’s shared Vietnamese heritage (and language), Will’s fears about what’s to come, and Looking Glass’s questionable living quarters stand out among the episode’s always-lush aesthetics. Even more interesting are the metatextual connotations; Lindelof as “master and not the maker,” the cheeky episode titles and closing conversations, and the synchronicity between timelines, as the episode ends three days from whatever is about to happen on Earth, while Ozymandias’ escape is clearly nearing its own apex (and with each episode suggesting another year interned, suggests he’s three years away from his own release).

It all amounts to a collection of interesting moments, stranded in a forgettable episode unable to mark any important narrative shifts; it’s all intrigue and ominous language, muting the impact of Lady Trieu’s showy introduction. Piles of bloody clone bodies and Will’s pointed disappointment in “betraying” Angela makes for fascinating images and moments, but as a part of Watchmen‘s whole, feels a lot more weightless than what came before it, and what appears to be coming on the horizon.

It’s a small misstep, but an important one: Watchmen‘s density appears to be coming into conflict with its narrative momentum more often than it should, which could prove troublesome in its climactic moments. Tick tock, tick tock, I suppose – hopefully next week’s episode offers a bit more clarity and cohesion than what “If You Don’t Like My Story, Write Your Own” has to offer.

Who would’ve thought Watchmen would challenge Mom for the title of “most engaging, mature female lead characters on the same show”?

A lot to pull from the meaning of the episode’s title: it could hint to characters taking control of their own narratives (Ozymandias reframing his imprisonment as a challenge, Angela learning about her family’s history and grandfather’s mission, Laurie’s legacy running around “yahoos”in her past), or it is a middle finger to Lindelof’s critics. Or it is what Lindelof probably told himself every day that Alan Moore would tell him if they ever got to speak to each other.

Few scenes on TV are more disturbing than watching Veidt casually discarding infants around in the open water. Or making them into very nude adults in his steampunk magic machine.

Senator Keane clearly knows he shouldn’t be naming Angela while she’s in her Sister Night uniform… and yet he keeps doing it. Almost like he’s making a point about it… it is most certainly too clever, by at least a half-measure.

So if Ances-Tree was able to trace the “unknown” Will to his parents, why would the program think the whole family died in the fire? If Will died, he wouldn’t be a grandfather – and since her family tree shows no siblings for him, it would seem natural that he, in fact, did not die in the fire. Not a big thing, but it’s a point of logic that stuck out in the moment.

So either Lady Trieu is trying to kill Dr. Manhattan or create time travel? Those are my best two guesses, as if I have any clue what the fuck is actually going on here.

The Mandalorian “Chapter One” is an Impressively Lush, Spaghetti Western-inspired Introduction to its World

Sesame Street at 50: A One-of-a-Kind Tradition