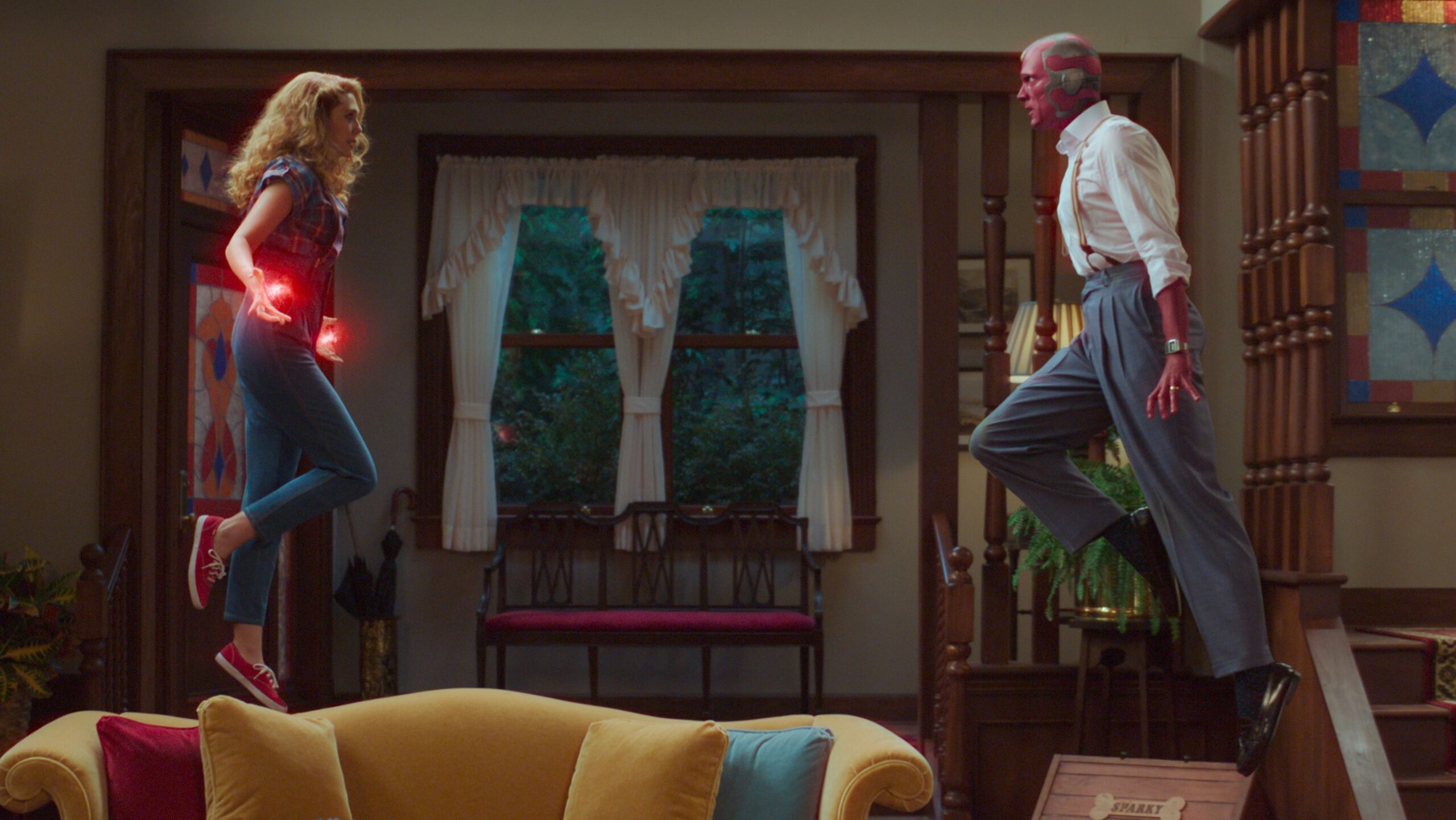 If there is one thing “On a Very Special Episode…” makes very clear, it is that WandaVision is not only an inflection point for the Avengers movie-verse, but for the entirety of Marvel Entertainment as a whole, an episode defined by the moment a 20th Century Fox Marvel character makes its way into Disney’s world (setting off an avalanche of memes throughout the weekend on Twitter, of course).

It’s a strange thing to consider, that a franchise of 30+ plus movies would fulcrum their dozens-of-billions-of-dollars/shared existence as a tag to an episode of a streaming mini-series: and yet, as Fox’s Peter Maximoff crosses the threshold – not only into Wanda and Vision’s home, but into a much larger, more complicated cinematic universe – the strange marriage of blockbuster tentpoles sets the stage for WandaVision to do exactly that.

It’s a massive inflection point; not only in repositioning the Phase 4 as Marvel embracing the “multiverse” of it all (and embracing the legacy of actors from Fox franchises, save for Chris Evans’ Fantastic 4 stint), but in how it is positioning its storytelling around Scarlet Witch’s mental state. And ultimately, that’s what makes the whole exercise of WandaVision grow a bit more tired week after week; while Bettany gives himself the sendoff performance of a lifetime, Olson’s Wanda is stuck once again as a narrative device for the larger machinations of Marvel – something that was a problem in the comics long before Avengers: Age of Ultron brought us Olson and Taylor-Johnston’s equally terrible knockoff accents.

“On a Very Special Episode…” is certainly an improvement over the last two episodes (kids creepily inhabiting two different genres of terrible child actor… genius); there’s even a sense, as Wanda brazenly exerts pressure on the internal and external forces challenging her constructed reality, that WandaVision is going to re-center itself on Wanda, and the pain of her lost dreams tearing apart the very fabric of reality. But “On a Very Special Episode…” takes a very strange approach to framing that conflict, both inside Westview and out; for Wanda, these emotions only manifest themselves as aggressive, in dissonance with the emotional desperation we see when Vision begins to become cognizant to what’s going on around him.

In those moments, WandaVision utilizes the accentuations of 80’s sitcoms to elevate its emotional material: the overused laugh track, the blocking of characters centrally in a large space, and the intercutting with close ups as Wanda struggles to control the growing number of variables around her. The adaptation of form has remained the most fascinating part of the series, and it perhaps gets its best use since the opening episode here: it even makes sense Wanda would be starting to let her guard down, embracing the open excess and plasticity of the 80’s, and strangely enough, how it would later give way to the existential doldrums and grunge (and heroin)-fueled depression of Generation X in the decade-plus to follow.

But the design of “On a Very Special Episode…” (outside of the still very boring “real world” segments and their ill-timed series of Dennings punchlines… no, we will not be talking about that boring nonsense here, life is too damn short) explicitly places the importance of Peter Maximoff’s arrival at the climax of the half-hour, dampening the exploration of Wanda’s mental space in favor of a moment far flashier than the emotional tenor of the episode needed. Rather than being left to consider the impacts of what Wanda’s doing to herself and the people she loves, WandaVision, feeding Marvel’s speculative addiction, wants audiences to be left wondering the why, how, and what of Peter’s arrival.

Which… though it makes sense in this context, it is such an odd thing to consider that this, the character who has mostly been left to the background since his scene-grabbing moment in X-Men: Days of Future Past, would be the big mashing together of Marvel’s massive, billion-dollar properties (if I remember correctly, he appears in about three scenes during the mess of Dark Phoenix). I mean, hell – I’m glad Evan Peters has been freed from the American Horror Story machine, but it’s not like he’s getting much better treatment here – outside of the initial Wow factor of “oh my god that actor from that one franchise at a studio, is now in a TV show from another company!” which… kind of speaks to the state of big-budget film production, no?

Regardless of the metatextual curiosities, Peter’s appearance seems to crystallize a lot of what’s forming on the fringes of Marvel’s Phase 4 (which again… ostensibly has nothing to do with WandaVision, which is quickly turning thinking about this series into a bummer). Peter’s arrival certainly signifies Something Is Up with the reality of the MCU – and all we have to do to wonder where this is leading to, are the impending Dr. Strange cameos, and the flurry of casting news recently around the next Spider-Man film.

(In short: Wanda’s fracturing of reality will lead us to the multiverse, where Marvel will essentially do Crisis on Infinite Earths on a much larger, more expensive scale).

It’s all just so weird, and not in the ways WandaVision is fun: this review’s basically turned into speculation based on casting news for future tv series and films, which means we’ve really lost the thread on its merit as a contained narrative and/or an effective vehicle for character development or thoughtful storytelling. I’m sure Peter’s appearance is an exciting moment for many, and yes, there is a bit of pleasure to seeing all the pretty people get smashed together incoherently into different movies (it reminds me of when my New Kids on the Block figures would save the day with my Batman action figure and TMNT toys)… but as a device to explore Wanda’s life, goals, and her place in the MCU, each episode seems increasingly less interested in that, as anything beyond a piece of the pseudo-scientific puzzle I don’t believe most audiences care about.

There are certainly compelling stories to be told about characters like Scarlet Witch, and how the events of their lives can exist on this maximal scale, given the intensity of their powers. But whether House of M or the Dark Phoenix Saga or Black Widow’s various back stories, Marvel’s struggled mightily to ground these stories in three-dimensional characters, especially as the allusion of cog-like worldbuilding and narrative carrot-chasing took over the comic book industry.

There’s a lot of fascinating things going on in WandaVision, from the immaculate imitation of iconic performances, to the creative decisions driving the combination of science fiction and sitcom in the show’s premise (plus, Kathryn Hahn makes a big comeback this week… never, ever going to complain about that). But every time WandaVision shoves the MCU in our face, it threatens losing the very thing making this show a special oddity; like Bettany’s Vision, the stark differences between fantasy and inevitable reality are a dissonance that cannot last forever – and when it does end, it may not be pretty.

(Also, it seems like this show is setting us up for a Michael Fassbender cameo, doesn’t it? If we’re going all the way down the rabbit hole, an appearance by Grumpy Magneto would certainly be welcome.)

Al Davis vs. the NFL is a Lively but Flawed 30 for 30 Installment