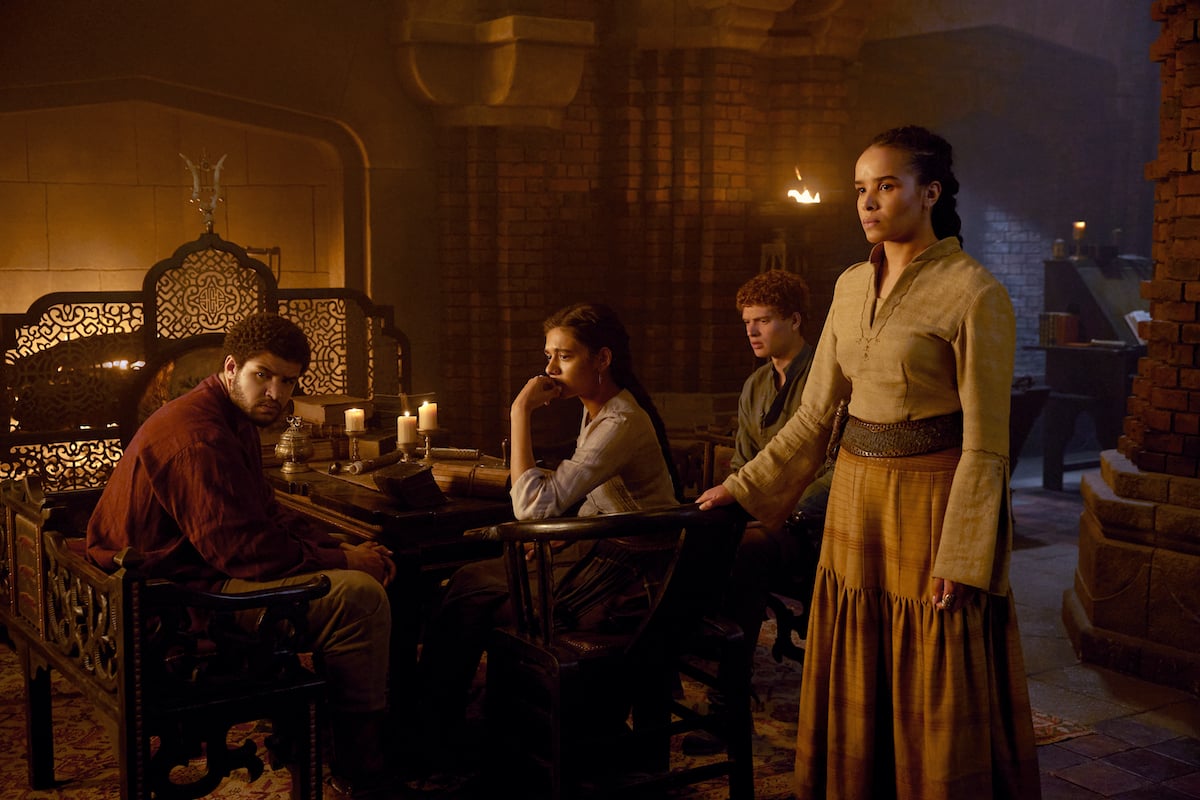 If you’d asked us a year ago whether we thought Amazon Prime would be able to do Robert Jordan and Brandon Sanderson’s The Wheel of Time justice as a show, we would have been hesitant to say yes. Although the streaming giant has proven themselves more than capable of producing quality content, thanks to shows like Upload and The Boys and Invincible, we’d have been worried that a fantasy series of this magnitude would have been too much for them to handle. However, Amazon Studios and Sony Pictures Television are proving that they’re industry giants when it comes to high fantasy and epic adventure.

What Our Villagers Are Up to This Episode

Episode seven, “The Dark Along the Ways,” opens with a pregnant Aiel woman fighting soldiers while going into labour. She manages to kill all of them but is severely wounded in the process. She takes refuge behind a rock and begins to give birth, only to find herself with a sword blade pointed at the chest.

We then cut to the present and see the group in the Ways, panicking that Mat (Barney Harris) has been left behind. Rand (Josha Stradowski) and Nynaeve (Zoë Robins) insist that Moiraine (Rosamund Pike) intentionally left him behind, while Egwene (Madeleine Madden) and Perrin (Marcus Rutherford) believe that Mat chose to abandon them. Moiraine asks the group if they really thought that Mat was really ready to face the Dark One before leading through the blackened passages of the ways with the help of Lan (Daniel Henney) and their Ogier guide and ally, Loial (Hammed Animashaun).

As they navigate through the darkness, they come upon a Guiding Stone that’s been defaced. They decide to rest there until Loial can decode the directions that lead them to safety. Unfortunately, the group is attacked by a Trolloc while in the Ways—something that should be impossible—and Egwene channels power to defend her friends before the group flees to the nearest Waygate. While they approach the exit, they’re attacked by the Black Wind, a voice that tells them their worst fears are going to come true. The voice overwhelms them until Nynaeve casts a protective sphere around them so Moiraine can open the passage out of the Ways for the group.

The group venture to the city of Fal Dara, where they warn Lord Algemar (Thomas Chaanhing) that Trollocs have been using the Ways, which is why their army’s movements and attacks have been unpredictable. The group is then welcomed to the city and given rooms for the night. Moiraine secretly sends a message to the Aes Sedai that they need to look for Mat, as she’s convinced that if he is the Dragon, he will join the Dark One, not defeat him. They then travel to a tavern so that Moiraine can meet up with an old friend, Min (Kae Alexander) who just so happens to be a seer undercover. She tells Moiraine that she can see a gold halo around Nynaeve, white light surrounding Egwene, blood dripping down Perrin’s lips, and a baby in Rand’s arms. She also warns her that the Amyrlin Seat will be Moiraine’s downfall.

The quartet then heads back to their rooms, but before the night is over they fight amongst themselves. Moiraine tells them that whoever is not the Dragon Reborn will die during their confrontation with the Dark One. Rand, still convinced that Moiraine means them ill, isn’t keen on joining her to the Eye of the World the following morning, Perrin worries they’re throwing away their lives for nothing, and Nynaeve doesn’t want to help the Aes Sedai. However, Egwene tells them that if there’s a chance of saving their loved ones back home, even if it’s just the smallest of chances, then they need to trust Moiraine regardless of what it might cost them.

Rand and Egwene rekindle their love for each other. Egwene tells him that she regrets not choosing him, and he tells her that she needs to follow her dreams of becoming an Aes Sedai, acknowledging that his fears of her abandoning him have been keeping them apart all this time. When she says that she doesn’t want to leave him again, he tells her that he’ll go to the White Tower with her—once they’ve defeated the Dark One—and train to be her Warder so they’ll never have to be apart again. They sleep together, but Rand leaves before Egwene can wake up.

Lan and Nynaeve also explore their feelings for each other after she follows him to a secret family dinner with his loved ones in town. The two of them sleep together and it’s revealed that Lan was supposed to be the next ruler of Fal Dara, but his family was slaughtered when the Blight came. Nynaeve expresses concern that because Lan is bonded to Moiraine that he’ll never really be with her, to which he tells her that while he’s bonded to Moiraine, she doesn’t own him. They spend the night together.

Rand, meanwhile, makes his way to the tavern to speak with Min. She was expecting him and it’s revealed that the baby Aiel had at the beginning of the episode was him. His father was the soldier, but instead of killing her, he helped her through her labour and kept the baby after she died of her wounds. We also learn that it wasn’t Egwene who channelled in the Ways, but rather it was Rand. We learn that he’s been able to channel for a while and is the child that was prophesied some twenty years ago.

The episode ends Rand seeking Moiraine out to tell her that he’s who she’s been searching for: he’s the Dragon Reborn. The two of them sneak out to travel through the Blight alone, something the group only discovers when they wake up the next morning.

This second-to-last episode of the season is one of the strongest yet. Not only does it firmly the ever-changing relationships we’ve explored all show, but it helps us understand the motivations behind the actions of our group of heroes. Rand, a frequently frustrating character, is finally given more of a story than just that of a dejected boyfriend missing his ex. Nynaeve and Lan’s relationship, which has been building for most of the season, finally comes to a head and it’s beautiful to watch these reluctant allies become lovers.

The show also continues to demonstrate that it knows how to write women better than most programs out there. Fantasy media frequently lacks female representation and when it does have it, women are usually restricted to supporting roles or objects of male affection. However, The Wheel of Time does an amazing job exploring the many facets of womanhood. It shows women as complete characters in their own right and complex in their lived experiences. It shows women as queer, as witches, as warriors, as healers, as mothers, as sisters, and—most importantly—in charge of their own fates.

If you’ve been hesitant to get into this series, we can’t urge you enough to binge this phenomenal show in time for next week’s series finale, available to stream exclusively on Amazon Prime.