Nothing is more important than “The Party.” Whether were talking about the original Star Wars trilogy, your favorite Final Fantasy, the Friends sitcom, Persona, or a group of crime-fighting teenagers. Ensemble casts thrive on the audience’s ability to identify with characters beyond a surface level quirk, archetype, or running gag; real people are complex enough to mold the frames which confine them. Teen Titans is a rare example of American cartoon television that understood this and more, but like with most beautiful things in this world, was taken away too soon.

For starters, there is no interchanging these characters with Justice Leaguers: each team member stands on their own and exists within no one’s shadow. You’ve got one sidekick on this team and he is the best interpretation of Dick Grayson yet in a cartoon series. Robin leads with charisma, consoles with compassion, falls prey to his faults, and always has a good one-liner ready. What easily could have been an adolescent Batman steals the show time and again while continually reminding us of his inexperience. That is to say nothing of the complexities facing the other members as seen in the show. 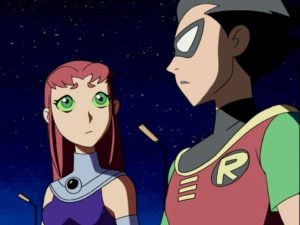 The Teen Titans are each given episodes to focus on and explore their characters through topics surprisingly adult for a kids’ show, yet somehow it works. Racism casting its shadow over Starfire, the changing times leaving behind Beast Boy, Raven struggling to escape fate, and the list goes on. Teen Titans’ tempo wanders throughout the series, exploring ragtime highs of absurdity and floundering low blues of nuanced conflict. Like a mirror room full of interpretive faces belonging to each individual character; various enough to know the person, the many people behind the mask. Conflicts that test characters in unseen ways that aren’t all about showing the good; truth doesn’t always triumph, justice can be bittersweet, and at the end of the day, these heroes are just people. Crime-fighting people trying to get it right, and that simple human fact is what makes them the most heroic, the trying, the journey. Not some ideal or absolute principal of justice, but confused and mistake-ridden endurance towards living nobly day by day. And isn’t that the best example we can set for our kids?

Not every day do heroes get this level of quality

Important lessons tend to get exhaustedly regurgitated, thus when it’s time for a refresher, things need to be kept fresh. And episodic series like this one keeps things fresh by experimenting with genres. Whether it’s the horror-themed episode “Fear Itself” that shows the supernatural aftermath of the Titans watching a scary movie, or the Rom-Com antics of Robin making a deal with villain Killer Moth that involves taking Moth’s daughter Kitten to a dance. In “Revolution” Starfire reminds her feuding teammates to uphold the founding democratic principles of America in the face of the exaggeratedly British villain Mad Mod. And Fan-favorite episode “How Long is Forever?” showcases the importance of friendship with a time-traveling storyline. Themes evolving with excitements making viewers ecstatic to watch every adventure and take notes from the themes expounded. With concurrency between themes and actions even when episodes dive into what can be considered clique (for example martial arts-themed “The Quest”), the series still has a good message to deliver with nuanced storytelling. Each portion of an episode amalgamates together into a neatly packaged classical throwback, making the familiar avoid the clique. 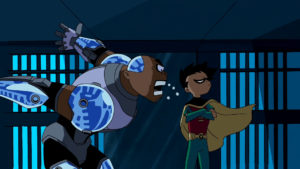 Teen Titans, Young Justice, or Justice League/Unlimited may all be action-oriented cartoons with ensemble casts, but their fundamental structure differs greatly. The underlying reverence for classical writing techniques puts Teen Titans above the rest. With most cartoon series, story leads to action (with character moments/development thrown in). In Teen Titans case, action leads to story/character development.  It uses character moments to relieve tension, but also in ways that simultaneously underline that season’s main arc.  “How does this contribute to the narrative?” seems to be what the creators are asking, and it’s one of the most basic tenets of writing that is often the first thing to go in action-focused narratives. It automatically becomes more appealing to adult sensibilities as what we have with Teen Titans is actual story versus the surface-level fun of action sequences. Action isn’t the end-point, it’s not the goal of the series, and I believe the best that superheroes have to offer isn’t their fancy moves but the characters themselves.

The main arcs of every season are where all the build-up concludes with epic payoff. The series is episodic, but certain episodes continue a main arc that focuses on individual characters. Season one is Robin, two is Terra, three is Cyborg, four is Raven, five is Beast Boy, and Starfire didn’t get her own season (another reason to bring the show back). These arcs attempt to explore an intimate aspect of the character focused on, whilst we see the flaws of them personified and the ensuing struggle for them to overcome it. This is where the different sides of characters become apparent, this is where the humanity is most present. These aren’t just big battles on the outside, but a confrontation with the most fundamental aspect of these characters. Season four is an exemplary example of this with Raven’s season being the most consistent in quality and having the largest build-up that spans across previous seasons. Raven’s arc deals with inescapable fate and her heritage as a daughter to the demon conqueror Trigon. Apocalyptic scenes, heart-warming moments, grand stakes, all mixed-in as we see Raven overcome prophecy with the help of her friends. Season four’s arc is American cartoons at their best and it should not be missed. 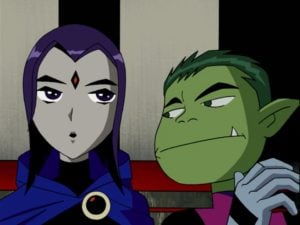 Not every day do heroes get this level of quality. Progressing through life, much to learn, and differences combating: heir to the Dark Knight, dark beauty, space princess, man and machine, and a green dork. No one is interchangeable or forgettable, like a good party, the Teen Titans need each other. It’s of the best American cartoons have to offer, moving the medium forward with intimate portrayals of comic-book characters in an experimental fashion. Teen Titans should be brought back; Teen Titans needs to be brought back.

It’s All With Good Intentions on An Undercooked BoJack Horseman

Diane Takes a Trip on an Emotional BoJack Horseman