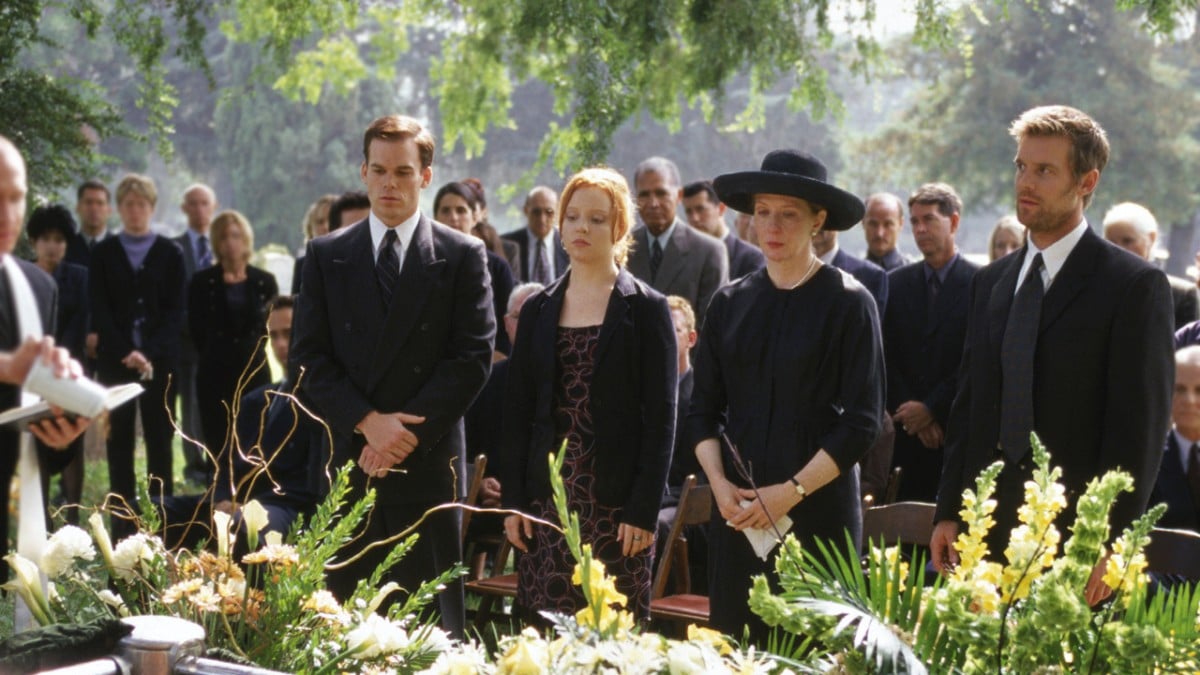 Everything. Everyone. Everywhere. Ends.

There’s a moment in the pilot episode of HBO’s Six Feet Under which perfectly captures the tone of the show. On his way to pick up his son from the airport, Nathaniel Fisher ends a phone call to his wife Ruth by promising he’ll give up smoking. He stubs out his cigarette. Then he smiles a little private smile to himself and flips another smoke into his mouth. It’s only when he bends to light it, that the bus bearing down on him at the intersection is revealed.

Death is everywhere: the loose stair tread, the drunk driver heading the other way as we drive home, the coughing fit which pops that weak artery, the poorly ventilated space heater. As Nathaniel’s demise demonstrates, if one thing (smoking) doesn’t get you, another thing (the bus) will, and, because Death has a sense of humor, it will usually be the last thing you expect that does you in.

Every Day Above Ground Is A Good One.

And no death happens in a vacuum. The pilot sets the structure for every episode which followed in the show’s five seasons: a death, closely followed by its repercussions. The Fishers run a funeral parlor and are used to both the death and the repercussions, usually in the form of grieving relatives. What they are less used to is being the grieving relatives. The death of Nathaniel means we get to know the characters at their darkest hour. And what we see isn’t pretty. The briefest of introductions are swept through before the blade falls: dowdy Ruth snipes at her husband, prissy middle son David raises an eyebrow as he listens to his parents bicker, prodigal son, Nate boffs his fellow passenger Brenda Chenowith in a supply cupboard in Arrivals and youngest of the family Claire smokes meth with her charmingly unstable boyfriend Gabriel.

That is, of course, the Fishers Before. Bereavement rarely brings out the best in people and the Fishers are no exception. The Fishers After do not improve. Nate and Claire slump on a couch together during the service, both bitching about how bad they feel. ‘This isn’t all about you!’ roars Nate at one point, the unsaid thought ringing clear as a bell: ‘It’s about ME!’ David, a gay of the so-far-into-the-closet-he-is-in-Narnia type, hisses at boyfriend Keith to leave before you embarrass me when he turns up to offer his condolences. Ruth swipes crockery from her kitchen counters when she hears the news, then later confesses an affair to her horrified children, the way that you do when their father has just died.

Dysfunction is always entertaining and the Fishers are riddled with it, but the tricky part is also making the characters likable. Six Feet Under pulls this off with the choice of actors. All of them are standouts – especially Michael C Hall as David and the superb Frances Conroy as Ruth – and the quality of the leads is matched by the supports: Freddie Rodriguez twinkling as the mortuary assistant Federico, luminous Joanna Cassidy as Brenda’s psychiatrist mother Margaret and the gravel-voiced Richard Jenkins playing the dead Nathaniel Sr. with a somber glint of madness in his eye.

The return of Nathaniel and the rest of the dead as the series continues is the final and strongest card in Six Feet Under’s hand. We’re treated to touches of the surreal at earlier points in this first show – David’s silent internal scream as he offers condolences to a family while digesting his own news is a perfect example – but the arrival of Nathaniel while David repairs the scratches on his father’s corpse lifts the drama to a new level of twistedness. Oh no tuts Nathaniel as David applies filling compound to the gouges, you’re doing me? You’re the worst one we’ve got.

Death is everywhere and the dead are always with us. Our parents may depart, but they still ask us why we can’t be more like our brother. The Fishers, more than any other family in any other drama, have to deal with an issue that is going to affect us all: our life, everyone’s life, is finite. Watching them cope, fail to cope, fumble, and recover gives us this one important hope: that one day when the inevitable arrives, we’ll have the grace to face it with some dignity.

The Pilot Episode of Roseanne Stands the Test of Time