Crazy Ex-Girlfriend is one of the most fiercely original shows currently on television as it enters its third season. But Friday’s season premiere finds the show operating in strange territory. The show has become the TV equivalent of Schrödinger’s cat — if the show’s writers follow one path, it will lead to another richly humorous and occasionally poignant season, and if they follow another it will lead only to ruin. As it stands, either outcome is equally possible.

The show barely has a moment to catch its breath after the tumult of season two, in which Rebecca Bunch (co-creator Rachel Bloom) reached the precipice of marrying Josh Chan (Vincent Rodriguez III), before he ran away to become a priest. If the season lacked some of the invention of the excellent first season, it made up for it by expanding its universe and moving away from the sometimes-toxic love triangle storyline. There was also a chance to reset Rebecca’s relationship with Josh’s mostly sane ex-girlfriend, Valencia (Gabrielle Ruiz), who became one of the show’s strongest supporting characters. The show got as close to all out mania as it could without imploding.

Season three opens with Rebecca in hiding while everyone at the law firm wonders what has become of her. Paula (Donna Lynne Champlin) even has to put a sign on her desk to remind people to stop asking about Rebecca’s whereabouts. Unlike her season one trip to Hawaii, Rebecca is actually just locked away in her house, spending her days in bed, stewing in a toxic mixture of rage and sorrow. The first of the episode’s two songs is a Beauty and the Beast homage in which Rebecca’s friends muse about her absence and get #wheresrebeccabunch trending on Twitter. 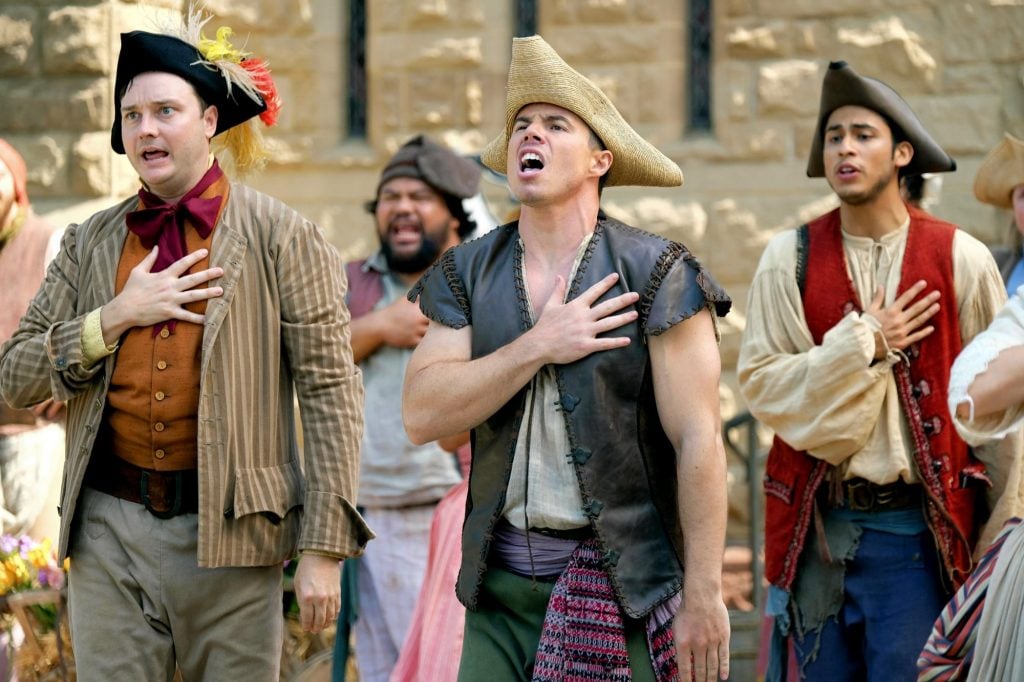 The songs on Crazy Ex-Girlfriend usually get credit for how funny they are (justly), but they’re also surprisingly clever. The music is similar to “I’m the Villain in My Own Story” from season one, which fits perfectly with Rebecca’s anger at Josh (an instrumental version of that earlier song is played over the end credits).

Rebecca’s strategy for revenge involves screening Fatal Attraction and Basic Instinct and dyeing her hair a darker brown. Her first plan involves coprophagia (“Poop stuff!”), before she switches to filming a fake sex tape in which a Josh Chan stand-in will renounce Jesus mid-coitus. After giving up on the sex tape, Rebecca and friends break into “Let’s Generalize About Men,” an ‘80s-style pop song about female empowerment, and one of the show’s catchiest numbers.

Valencia’s solution for Rebecca’s revenge is to sue Josh for leaving her at the altar. As silly as that is, it’s a more realistic approach for Rebecca based on the show’s history. The season premiere was filled with great joke writing, and the focus on Rebecca’s group of female friends creates an exciting new dynamic, but it also felt like it was in danger of toppling over at any moment. The show has always featured a contrast between more realistic storylines and wilder departures. It made sense because of Rebecca’s mental illness, which could motivate an otherwise rational person to do ridiculous things. But the premiere had little of the usual come downs that tend to follow its fits of fancies. It looked like the show might just continue with the outrageous storylines until it lost all connection to reality and burst into flames.

That’s why Valencia’s more sensible idea to sue Josh was so important — it’s a chance for Crazy Ex-Girlfriend to slow down and find the kind of pace that has worked for it so well in the past. The show’s portrait of borderline personality disorder and mania is so on the nose that it becomes too frightening and too difficult to really care about Rebecca’s struggles.

There’s reason to believe that Bloom and co-creator Aline Brosh McKenna understand this dynamic. In a recent interview with Vox, McKenna mentioned that the third season would dig further into Rebecca’s early romance with a college professor that ended in disaster, as well as her subsequent time being institutionalized. This would be a vital direction for the show. Without it, Rebecca is just a villain in her own story. But by focusing on her struggles with mental health issues, the show can wave its wand and turn her back into a fully fleshed out human being, like something that might happen in the Disney films that so warped Rebecca’s perceptions.

Which brings up that Schrödinger’s cat comparison. If Bloom and McKenna follow through with her comments and have a deeper focus on Rebecca’s struggles and her mental illness, then the premiere will operate as an inspired bit of zaniness and levity before a darker and more poignant transition. But if they continue down this path of heightened reality, the premiere will become a marker of where Crazy Ex-Girlfriend first lost its footing. The show’s future is bright, but there are still clouds on the horizon.

Roasting a Clover to a Charcoal Black