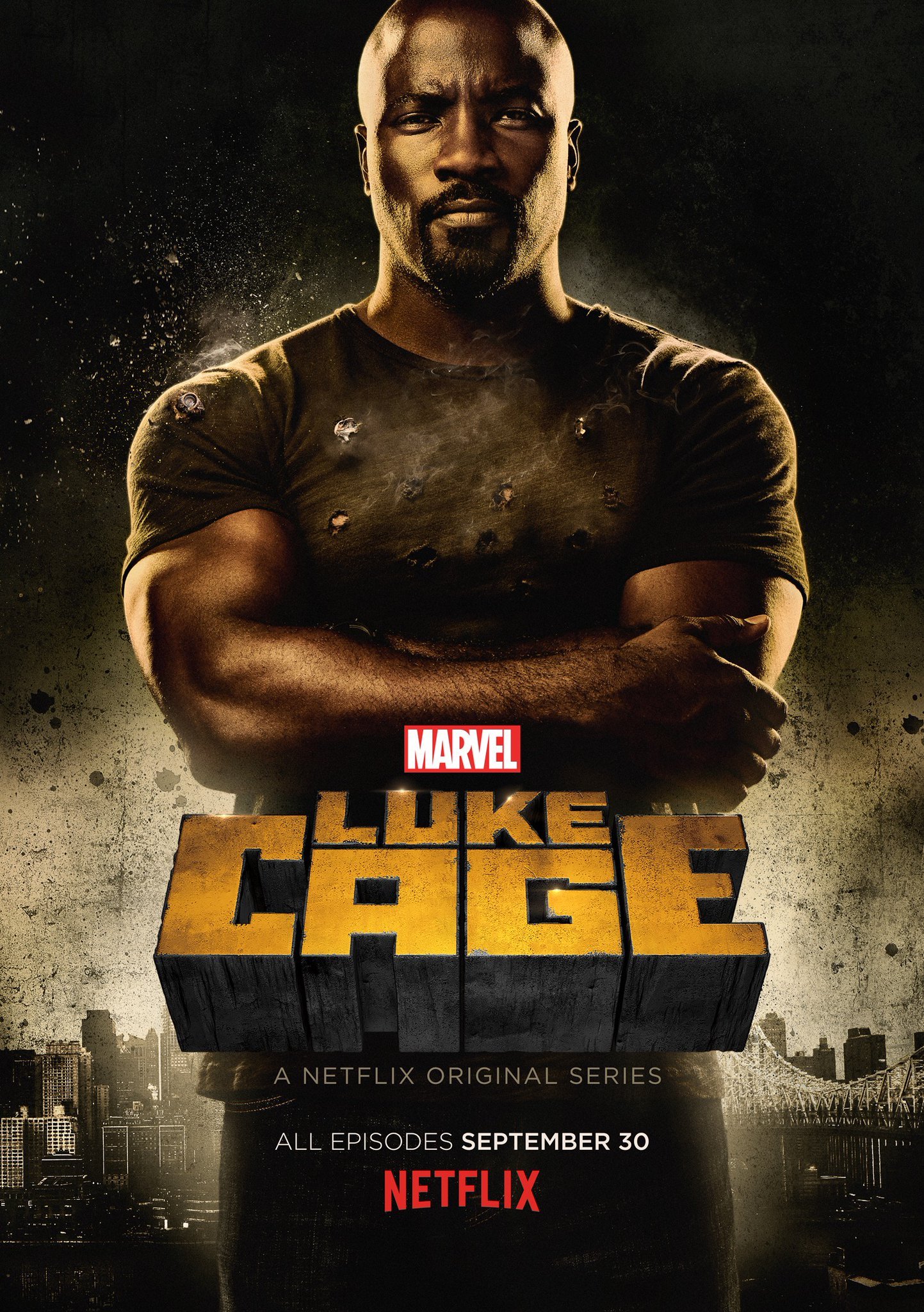 Marvel’s previous two Netflix exclusive series were highly acclaimed and extremely popular, meaning that their newest, Luke Cage, had a lot going for it. But with such an unknown character, could Marvel make an interesting show for those who had never even heard of him? Or would the end result be a drop in the superhero bucket? I’d say about fifty-fifty.

The show begins with Luke Cage working at a barbershop in Harlem, NYC. He lifts up a fridge and (gasp) he has super powers! Luke is also an escaped convict, which is pretty important. After some well-executed character development showing Luke as just a big softy, the owner of a barber shop called Pops is murdered by the notorious crime boss Cottonmouth, who also destroys the entire shop. This is Luke Cage’s main reason to come out of hiding and start beating up baddies. There’s also some heat between him and the police force, but I’ll get to that in a bit.

This all sounds very super-hero, I know, but it’s the moments where it steps away from that formula that the Luke Cage really shines. Pretty much every major character in the show is African American, which makes sense given the setting of Harlem. One of the major themes throughout is the daily struggles Harlemites and African Americans have to go through. Every single character is affected by this environment, especially the villains, so the theme really works. Luke was wrongly convicted of murder and sent to jail, Cottonmouth was part of a drug-dealing family when he was young and had to sacrifice his dream of playing music in order to take over, and even most of the side characters are shown with such problems. It’s a smart divergence from the original comics, where these issues are present but not nearly as prevalent. With race, discrimination, and prejudice being such a huge topic today, it was appropriate to make a show revolving around not only Luke Cage but also these problems. In this way, Luke Cage feels a lot like a think piece at first. It presents these ideas and asks the viewer to consider them. This drastic difference from not only the original Power Man comics, but the entire Marvel formula, is what keeps the show interesting and unique.

Supporting this is one of the show’s main villains: Cottonmouth. He is a villain, yes, but he truly believes that his actions are for the greater good. He murders and destroys in the name of Harlem. Cottonmouth believes that the neighborhood needs a strong hand to knock it into shape, which starts to make more and more sense further into the show. His backstory shows he never actually wanted to delve into crime, but music. Forced into his role as a crime boss, Cottonmouth might as well make the best of it. He believes in the “ends justify the means” ideology and it’s hard to argue with the results when the broader scope is shown.

But, when it gets into peculiarities, it’s also easy to dislike Cottonmouth, a characteristic that should be shared by all villains. Luke often has to help the victims of Cottonmouth’s gang, which provides character development for both Cage and the setting itself. Seeing these individuals displaced by Cottonmouth’s actions adds to Luke’s personal vendetta against him. It causes the viewers to root for the protagonist during those times, but also understand Cottonmouth’s perspective when it focuses on him. This duality kept me watching. The viewer knows who has to win in the end, but that doesn’t stop them from considering both sides. That quality is a welcome change from the Marvel formula. Unfortunately, it doesn’t last forever. About halfway through the season, Cottonmouth — on of the most understandable, relatable, and intriguing villains in Marvel — is killed and replaced by a much more generic duo of villains. One a corrupt and slightly insane politician and the other an assassin bent on bringing down Luke Cage. While Cottonmouth’s story was different and captivating, these two are completely generic and wholly unlikeable. The politician is shown as weak and easily manipulated, so she doesn’t feel like an actual threat, especially since the only tools at her disposal are completely useless against Luke. The assassin is a little more interesting, but feels like your average villain hoping for revenge. These two combined — as well as the loss of Cottonmouth — caused me to lose almost all interest in the show.

In fact, Luke Cage and his love interest — Claire Temple — were the only characters I liked by the end. The villains are dull, and the Police Department is just frustrating. They’re only a road block for Luke to conquer, but they get so much screen time because of the detective character Misty Knight, who is equally aggravating. She’s presented as this strong, independent character but later breaks down crying constantly and has to be protected by Luke on more than one occasion. Her character represents the show as a whole: constantly battling its own theming and goals.

Luke Cage started with a lot of promise. It preached some important messages and its themes were endearing. Cottonmouth provided for an awesome antagonist and mirrored Luke’s goals, resulting in an interesting and different duality. But, when that character was killed, the show seemed to lose sight of all of that. Luke Cage started feeling less like an average guy trying to get by and more like a superhero dedicated to protecting the universe (A.K.A not relatable). The two new villains presented themes that have been rehashed for the past decade. The show went from a think piece providing a look at the everyday struggles of a Harlemite with a superhero twist to a superhero show where insanely strong dudes beat on each other until the hero inevitably wins.

The Games that Inspired HBO’s Westworld