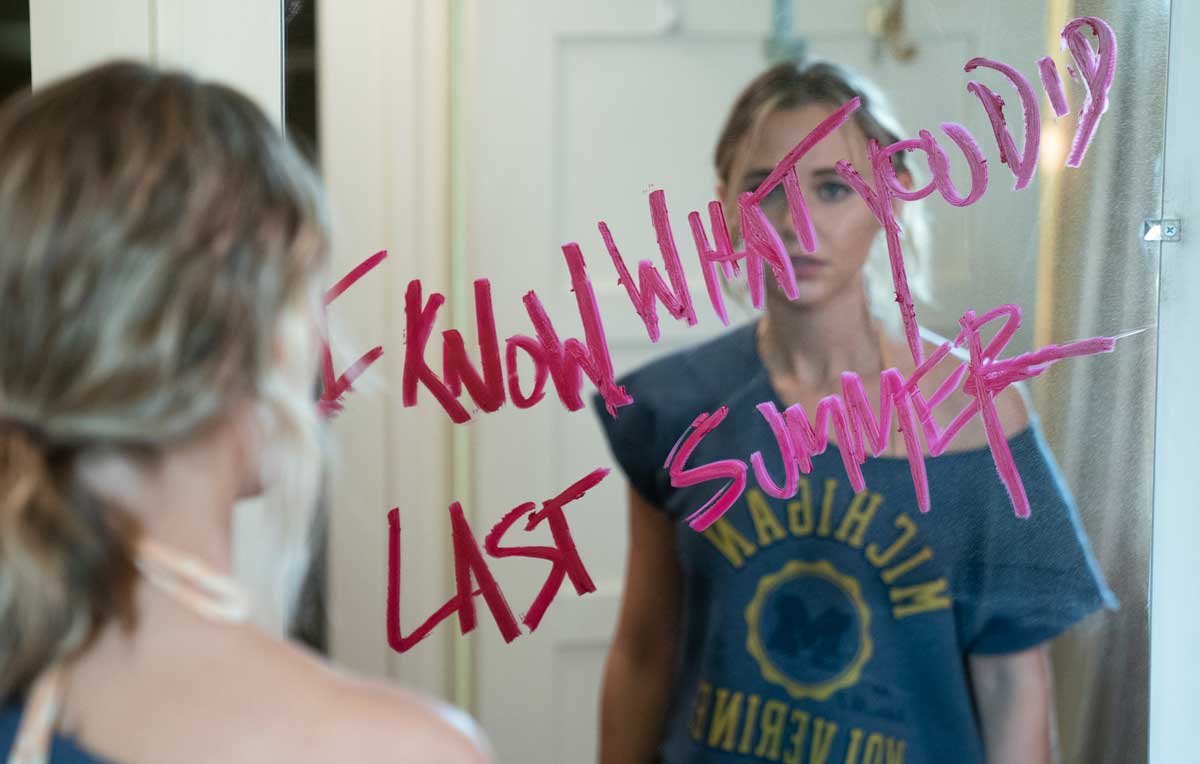 The 90s nostalgia train is continuing its leisurely journey through culture and is now at the horror station. The campy Jennifer Love Hewitt film from 1997, I Know What You Did Last Summer, has been remade with a new set of fresh young faces. Since it’s 2021, it’s in miniseries form on a streaming service. As of episode four, the show is an entertaining fun spooky season ride, in no small part to Madison Iseman, but stumbles a bit with finding its footing. It’s at its best when the story eschews from the film, keeping viewers on their toes, and when Iseman’s performance takes center stage.

During the premiere, the first big difference between the film and the show is revealed: the protagonist in this new version is a twin. Lennon (Madison Iseman), who viewers learn lost her joie de vivre one year ago and now insists nobody knows her, is back in her hometown in Hawaii after a year at university in Michigan. She has an identical twin, Allison (also played by Madison Iseman), who audiences are aware of through pictures but is suspiciously absent until the flashbacks begin.

At a high school graduation party last summer, viewers see that Lennon used to be THE party girl in town. There’s a lot of drugs, some face stickers, and some classic sexy girl-on-girl dancing. She also kisses everybody on the lips constantly. Maybe this is something a lot of Generation Z are doing. Allison is a party pooper who likes Dylan (Ezekiel Goodman). The first big issue that’s apparent within 30 minutes: what’s with all the Dylan hoopla? He certainly doesn’t have the charisma or hots of a 1997 Ryan Phillipe or Freddie Prince Jr. The rest of the requisite friend group is made up of chill drug dealer Riley (Ashley Moore), wealthy social media influencer Margot (Brianne Tju), and gay kind (At least, he appears to be the kindest of this hot mess group of youths.) Johnny (Sebastian Amoruso).

The premiere’s twist is easy to see coming. Instead of killing a stranger on a road, the gang kills one of the twins. Allison is driving the car, but the rest of the group thinks she’s Lennon. When she hits the real Lennon, they all think she hit Allison, and she doesn’t correct them. Iseman’s performance in this scene is the best part of the episode. Allison’s in shock while the others discuss what to do around her. Their quick and visceral depiction of why Allison’s death isn’t that important because of her mental health, lack of friends, and college plans, is cruel and quick. Dylan and Johnny half-heartedly insist they do the right thing by Allison as they were the two who cared about her the most. Of course, they still dump Allison’s body (reminder: it’s really Lennon’s body) in the cave where her mother committed suicide with some cult. Yes, a cult. No, there hasn’t been a lot of explanation around this yet.

The premiere lays some solid crumbs of information that could lead to interesting plot developments: What’s with the cult? What’s with the woman who saw the group leave Lennon’s body in the cave? Why is there weird tension between Johnny and Margot about their past? What does Lennon know about her mom that would make her tell Allison that she didn’t love her? Are they sure Margot didn’t post something online from that night? Some of these questions start to get answers by the end of episode four, but hopefully, there are more to come.

Episode two quickly reveals that the twins’ hot dad (Bill Heck) knows about the switch. If a dad can’t tell the difference between his twin daughters, it would be such an annoying plot hole. Like the weird plot hole around Johnny and Coach Craft (Duncan Kamakana). Apparently, this town is completely at ease with this high school Coach dating a 19-year-old boy. Not only are they dating, but they’re also engaged, and they started talking when Johnny was still in high school. But the Coach is still adored for some kind of weird high school legacy thing. It doesn’t make any sense. In a post-Pretty Little Liars world, I thought people realized high school teacher and student relationships are always, always messed up. They die by the end of episode two in a creative Final Destination-esque scene with weights and an unscrewed railing. Their deaths feel a bit premature, but the ball has got to start rolling at some point.

Episodes three and four have several more deaths, including an obvious one in episode three and some surprising ones in episode four. However, there’s little character development for anybody other than Allison. It doesn’t even feel like the audience knows Dylan or Riley at all. Maybe they have more substantial storylines in the back half of the season. The best divergence from the original comes in episode four when Lennon’s body floats up next to Allison. By ensuring that the victim isn’t going to be the killer, the show firmly identifies itself as something different than the original. It might have been interesting to see a vengeful Lennon as she seemed like she had the potential to be a proper villain for an 18-year-old.

Although a bit underwhelming at times, the show will at least be a vehicle to stardom for Madison Iseman, who shines when she’s playing Allison pretending to be Lennon. If the show continues veering away from the original, has a few more gory deaths, and stops fetishizing a weird teenage/high school teacher romance, it’ll be a solid addition to the 90s nostalgia train.