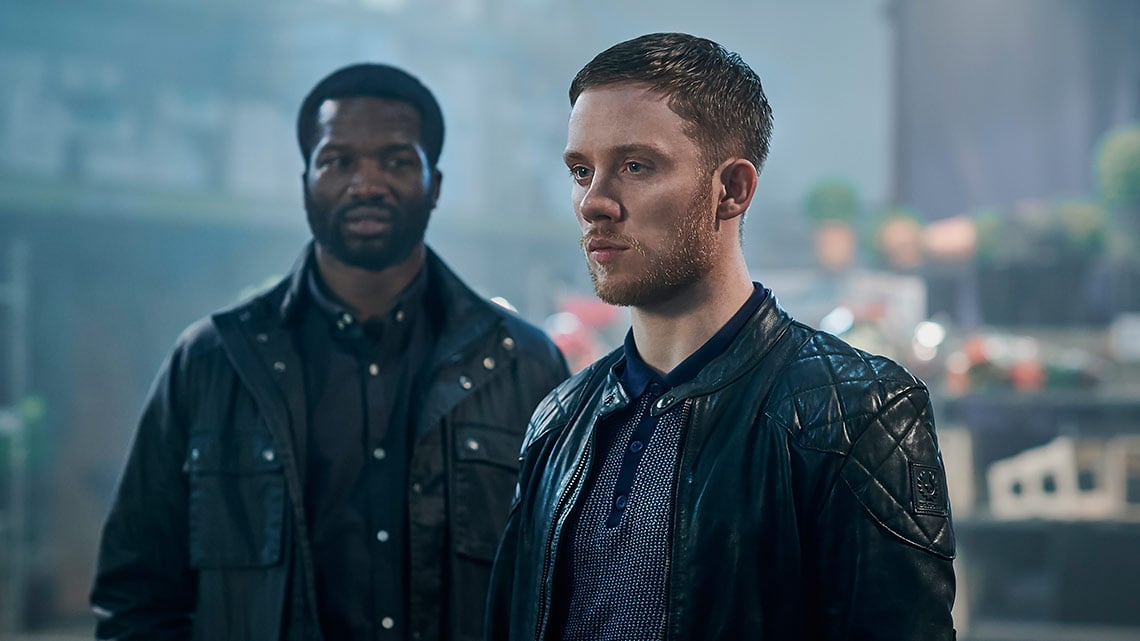 Gareth Evans has become known for a few things: slick films with a grimy atmosphere and enough blood to satiate even the most blood-thirsty filmgoer. Wherever Evans goes, so too does cinematographer Matt Flannery who has shot almost everything Evans has worked on since his 2006 film debut, Footsteps. Now the two have joined forces creatively to try and take their unique action sensibilities and bring it to the small screen with Gangs of London – a nine-episode crime saga that finds the two retreading familiar territory with The Raid series. Unflinching in its violence and ambitious in scope, Evans and Flannery deliver some of the best action scenes to ever hit television – but eventually, the adrenaline wears off to reveal a convoluted drama trapped in its own machinations.

[Gangs of London] delivers some of the best action scenes to ever hit television – but eventually, the adrenaline wears off to reveal a convoluted drama trapped in its own machinations.

Taking place in modern-day London, there are so many narrative threads introduced and maintained in Gangs of London that it is remarkable that any of it makes sense. Focused primarily on Elliot Finch (Sope Dirisu) and Sean Wallace (Joe Cole), the story quickly brings the two protagonists together following a seemingly random killing of Sean’s father and London’s criminal kingpin, Finn (Colm Meaney, who unfortunately has little screen time despite being one of the bigger names in the cast). An undercover cop, Elliot worms his way into Sean’s good graces to try and take down the large network of international gangs that have seemingly taken over the city.

Those familiar with Evans’ The Raid 2 will find themselves most at home in the first season of Gangs of London. There are multiple gangs, each one vying for power in a city where the most powerful family is now struggling to maintain control. The first episode does an incredible job of setting each family up and throughout the course of the next few episodes, it fleshes each one out and carves their own piece of London out for them. Every criminal enterprise feels like it’s a part of the city. As the season continues to capture the strife between each group, there’s a knowing tension that every alliance is fragile. This is where both The Raid 2 and Gangs of London shine almost as bright as their action scenes. By pitting everyone against everyone, there is rarely a dull moment as it fluctuates between Shakespearean drama and cutthroat crime epic.

With all of the different factions vying for their slice of London, it’s a miracle that they are all compelling in some way or another. It’s rare for a show to have so many groups and create strong relationships between them all. With everyone dependent on Finn Wallace, his death is a catalyst for everything to unravel, and every group forced to evaluate where they stand with others. While immediately interesting, most storylines tend to fizzle out by the end and there is this strange feeling that the showrunners kind of checked out after the halfway mark. Resolutions come quickly and while some arcs get a bit more attention, they’re also not very well done. While Evans and Flannery appear as producers and creators of Gangs of London, it really feels like they knew how they wanted to get to the last episode they wrote (the fifth episode) and then became far more hands-off in the entire production of the show.

It is important to note that there are only three directors over the span of the nine-episode season, with Evans only directing the first episode (which is also the longest) and the fifth. Corin Hardy fits snugly between those episodes directing the second, third, and fourth, as well as capping off the season with the finale. The unfortunate truth is that once Xavier Gens becomes the director of the episodes, the quality of the show takes a steep nosedive. It also lasts for three episodes and comes after one of the best episodes of television I’ve seen. It’s in that final Evans-directed episode that the show peaks in almost every regard and seems to take everything the director has learned over the years and distills it into a 54-minute masterclass in tension and action as storytelling. If anything else, the show is worth watching for that alone.

Perhaps the problem is more with how good that episode is and how incredible the action is that makes everything afterwards pale in comparison. There are interesting ideas in how they tell the rest of the story but it just starts feeling like a drag to the finish line. There’s significantly more torture, more shoddily edited action scenes, and worst of all: action scenes that are there feel abbreviated, as if the budget was skyrocketing and something had to be pared down. Which makes sense since the show is a slick production with a huge cast.

While most of the main cast were unknown to me outside of Michelle Fairley as the Wallace matriarch and Joe Cole, they’re all pretty good even when working with some pretty bad dialogue. Sope Dirisu fits in nicely as the audience surrogate and blank-faced protagonist against Joe Cole’s angry, juvenile Sean Wallace. The big standouts are everyone I’ve mentioned so far, Mark Lewis Jones as the father of the person who shot and killed Finn, Narges Rashidi as Lale, and Orli Shuka as Luan. Everyone else is good, if not great, but don’t carry the same kind of presence when they walk into a scene. Most characters get a moment for the actors to shine – an opportunity that no one really fumbles.

There are three components to Gangs of London that seem to dictate the enjoyment I had watching the season. For starters, it’s bloody and brutal, which will likely put off some who are not used to the kind of extreme violence Gareth Evans has been employing for years. He doesn’t cut when something is disgusting, instead usually leaning into it to create a palpable investment in characters avoiding bodily harm. You don’t want to see the person get cut, but seeing the repercussions of them being cut is what makes every subsequent bout of violence all the more terrifying.

Then there are the characters who all embody their own shades of gray. Almost every prominent character ends up playing a role in a father/son relationship that is often bumpy in some way or another: the father and son on the run after one kills Finn Wallace; the father and son trying to keep the Wallace enterprise together while Sean and his brother contend with the wake of the death of their father; the father helping his son become Mayor of London while still maintaining his heroin operations; or even Elliot and his father’s past relationship and what little is left there now. Gangs of London taps into this relationship to illustrate interesting ideas like fragile masculinity and differences between generations. Unfortunately, these are all barely touched on and instead lack the substance they maybe should have garnered.

Evans and Flannery have created an ambitiously intricate criminal empire that lacks the drive to tell a bigger, grandiose story.

This all leads to the main reason Gangs of London is able to be both compelling television and disappointing at the same time: the plot. It starts off with one simple question: who killed Finn Wallace? After that, the show navigates the fallout of Finn’s death and how it affects each character while they try to continue on business as usual. It works itself into a web of conspiracies and intrigue until it has to start unraveling itself. At that point, Gangs of London just starts cutting away at threads instead of untying them neatly. The only storyline that feels neatly wrapped up is in the fifth episode, which as mentioned, feels like the last time the showrunners seemed to pay their series any mind. That being said, it’s impossible to not want to see what happens next to each character. This makes the remaining episodes difficult to get through because nothing feels as carefully planned but still carries a similar momentum to the first half of the season.

Gangs of London is a show with glaring issues that only really manifest in the back-half of the season. Until that point, it’s a remarkably well-made crime drama that will make action fans swoon over the fact that they get more Evans-directed carnage. Once things start unwinding, the show just feels like any other gangster show. It’s easy to compare the Wallaces and the Shelbys from Peaky Blinders but it would be selling a show like Peaky Blinders short because there isn’t just an interesting family there, there’s a potent narrative that feels intertwined with them. Gangs of London lacks that kind of focus. Instead, Evans and Flannery have created an ambitiously intricate criminal empire that lacks the drive to tell a bigger, grandiose story. Instead, it feels like table-setting for what could be an exciting series with future seasons and more time spent on letting plots naturally run their course.

Wild Card: The Downfall of a Sports Radio Loudmouth Tells the Sordid Story of Craig Carton

Netflix Series, The Haunting of Bly Manor Will Haunt You Long After You’re Done Watching