Connect with us
Get ahead of the curve for Amazon Prime's new show series, 'The Wheel of Time'

“As the Wheel of Time turns, places wear many names. Men wear many names, many faces. Different faces, but always the same man. Yet no one knows the Great Pattern the Wheel weaves, or even the Pattern of an Age. We can only watch, and study, and hope.”
-Robert Jordan, “The Eye of the World”

What is The Wheel of Time?

The Wheel of Time is a high fantasy series started by Robert Jordan in 1990 with his first book The Eye of the World. It sends three young men Rand Al’Thor, Matrim Cauthon (Mat), and Perrin Aybara from their quaint farming homes in Emond’s Field; a small village in a rural community known as the Two Rivers, into a world-spanning tale of good and evil. An ancient malevolent force locked away in a mountain has made contact with the three boys in their dreams and will stop at nothing to get them. One of them is the “Dragon Reborn”, a legend of the world who will simultaneously save and destroy it as he has before in previous ages.

The three boys are accompanied by their friend Egwene, Emond Field’s Wisdom (Healer) Nynaeve, a wandering Gleeman named Thom Merrilin, a warder named Lan, and the woman he serves, Moraine. Moraine is an Aes Sedai; an order of women who can channel the One Power which is the source of magic in the world. She believes the Aes Sedai can help the boys at their capital Tar Valon and leads the group onwards. The cast of The Wheel of Time grows to over 2000 characters following the journey that leads up to a final showdown between good and evil, The Dragon against Shai’tan the dark one, Tarmon Gai’don.

Robert Jordan tragically passed away before finishing his series. Before his death, Jordan left extremely detailed notes for the next author, Brandon Sanderson, to finish his story in three books culminating in the 2013 title A Memory of Light. The Wheel of Time spans a monstrous collection of 14 novels total, plus a prequel, and companion books. This epic saga has touched on every culture and time period in some way or another, with a heavy emphasis on the Buddhist and Hindu belief of reincarnation and the nature of time cycles. The series has sold over 80 million copies worldwide and spawned a graphic novel iteration.

And Sony has partnered with Amazon to bring this insanely epic story to life on its streaming service Prime.

The Wheel of Time cast and production so far

Filming began on September 16th, 2019 with principal photography. Very little is known about the script with no leaks yet, and photos from the set being too vague to get reliable information from. What is known for certain is the cast so far.

Rosamund Pike, best known for her role in Gone Girl, has been cast as Moraine. Moraine is notably the scripts lead role, telling us we’ll be seeing a lot of magic. While the Aes Sedai all draw power from the One Power, they are divided amongst themselves into the seven Ajahs. Each of the seven Ajahs; Blue, Green, Yellow, Red, White, Gray, and Brown, all follow a different set of rules living for a different purpose. Moraine is part of the Blue Ajah, who focus their intents on righteous causes and justice.

Alanna Mosvani, on the other hand, is a member of the Green Ajah. To be Green is to always be prepared for Tarmon Gai’don. Alanna will be played by Priyanka Bose, with her two warders Maksim played by Taylor Napier and Ivhon played by Immanuel Imani. Alanna and her warders get their entrances into The Wheel of Time during the second book of the series The Great Hunt. This tells us that the season will have at least some elements from beyond the first book, The Eye of the World, leaving speculation so far as to how much this first season will cover.

Pictured above is Daniel Henney, who will be playing Moraine’s warder Lan.

Madeleine Madden (pictured top left) takes the role of Egwene Al’Vere, the beautiful young lady from Emond’s Field, who learns to use the One Power under Moraine. And Zoë Robbins (pictured fourth from left) will be playing Nynaeve the Wisdom.

Rounding out the rest of the cast is Alexandre Willaume playing the travelling Gleeman Thom Merillin who is as much a juggling storytelling showman as he is a singing bard. Alvaro Morte as Logain Ablar a false dragon reborn who has been said to be seen wielding the One Power without going mad, like the men before him who have tried. Johann Myers as Padan Fain, a Darkfriend, servant to Shai’tan the dark one. And Hammed Animashaun as Loial the Ogier, a race of creatures standing 10 feet tall who normally live and stay in the forests of the world.

The Wheel of Time TV series is slated for a 2021 release on Amazon Prime, and looks to fill the fantasy gap left by Game of Thrones. 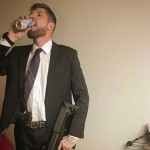